Please do not lose temper seeing the editorial published in NFPE website.  The official figures duly verified and certified would be published soon to establish truth.  It is not the culture of the great NFPE  to LIE.  Very sorry!  Please await details. 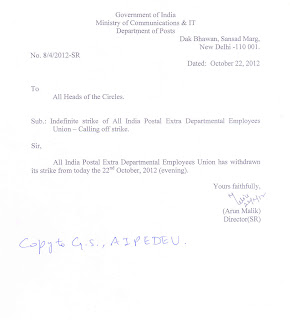 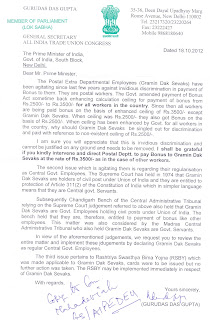 FOR NEW SCHEDULE AND TO COMPLETE THE PROCESS BY 30TH JUNE 2013. BY THE CIRCLES.

THE SCHEDULE GIVEN BY DE SECTION IS NO MORE OPERATIVE AND THE INSTRUCTIONS DATED 8-10-2012 IS WITHDRAWN WITH IMMEDIATE EFFECT.


FOR NEW SCHEDULE AND TO COMPLETE THE PROCESS BY 30TH JUNE 2013. BY  THE CIRCLES.


SUB; HOLDING OF LIMITED DEPARTMENTAL COMPETITIVE EXAMINATION FOR DILLING THE POSTS OF POSTMEN/MAIL GUARDS AND MULTI TASKING STAFF AS PER REVISED RECRUITMENT RULES.


2. Subsequently, the nodal branch staff section vide letter no. no. 45-2/2011-SPB.1 dated 18-10-2012 issued detailed instructions to the circles for filling the vacancies by holding separate examinations for each year vacancies and given specific schedule and to complete the process by 30th June 2013.


3. In view of this revised position, the schedule given by DE section has no more operative and the instructions dated 8-10-2012 is withdrawn with immediate effect. The circles are requested to follow the guidelines issued by SPB.1 section letter no. 45-2/2011-SPB.1 dated 18-10-2012 scrupulously.


4.  This issues with the approval of Competent Authority.


All glory to valiant Gramin Dak Sevaks (Postal Extra Departmental Employees) numbering more than 2.7 lakh for their 7 day long heroic strike in support of their demands braving all hardships and false and baseless propaganda unleashed during strike by those who played the role of Dalals of the management.  All sorts of rumours were spread in order to weaken the strike.  But steel like unity of the mass of Gramin Dak Sevaks defeated these nefarious moves of traditional splitters and disrupters who have been at this game for long and who threw out in most unconstitutional/illegal manner AIPEDEU from Postal Federation.  There were spontaneous demonstrations/protests all over the country by Gramin Dak Sevaks and other ordinary Postal workers belonging to other Postal organizations who supported Gramin Dak Sevaks strike despite negative attitude of their leaders.  It is because of the unity of the mass of Gramin Dak Sevaks and the support they got from other Postal workers that they have come out victorious from this struggle.

We were forced to go on strike because of the refusal of the authorities to remove the invidious discrimination between Gramin Dak Sevaks and other workers in the matter of bonus ceiling and non-supportive stand of sister postal organizations.  The postal authorities were forced to negotiate in order to resolve the issues but decisive voice was not of Postal Dept. but of Finance Ministry.  On 22nd October,2012, the 3rd round of negotiations was held with the management and a settlement was reached.

It will be seen some important demands like pay protection have been settled in satisfactory manner.  As regards demand pertaining to Bonus, it has been stated that inter-departmental consultation are underway. We have been told that Bonus has been recommended to Finance Ministry for approval.Health scheme – RSBY expected soon.  We are hopeful it will be resolved because our demand is just.  It was a correct and right decision to call off the strike and give an opportunity to Postal Dept. to seek the approval of Finance Ministry.

We are grateful to Shri.Sushil Kumar Shinde, Union Hon’ble Home Minister, Shri.Veerappa Moily, Hon’ble minister for power and Corporate affairs, Shri.Mallikarjuna Kharge, Hon’ble Labor Minister, Shri.Sachin Pilot, Hon’ble Communication minister for state, Shri.Jyotiraditya Sindhia, Hon’ble Industrial Minister for state, Shri.Oscar Fernandes, Hon’ble Member of Parliament,Shri.Rahul Gandhi, Hon’ble Member of Parliament and all those intervened during our struggle.  We are also grateful to AITUC and its General Secretary Com.Gurudas Das Gupta MP for their continuous support and help.  Com. Gurudas Das Gupta supported our demands forcefully and talked to Minister and Secretary, Posts, several times urging upon them to remove invidious discrimination in the matter of payment of Bonus and accept other demands.  He wrote number of letters to Minister as well as to Prime Minister in this regard.


With warm regards,
Yours Comradely,


Sub: Protection of TRCA – cases of GDS other than BPMs.


…….
Apropos above, we are much thankful for causing orders protecting pay pocket,TRCA, of the BPMs.  Time and again such pay reduction is noticed and we have been advancing argument in favour of protection of pay with relevant information/document for the fullest satisfaction of the authority.  But still the problems are on increase, not solved completely.  Now that above order would give temporary relief to BPMs.  As regards other GDS viz., GDSMD, GDSMD/MC, GDSMP etc. the same relief needs to be extended as these categories are also suffer reduction of TRCA for one reason or the other.


In fact there is no scope for reduction of TRCA as in the present situation GDS of all categories are working more than their duty hours while engaging themselves in various business activities of the department viz., opening of savings bank accounts, PLI and RPLI, NREG, direct posts, pickup service etc.  The GDSMPs work in offices from morning to evening, opening to closing of office, and work like watch and ward of the post office and strangely their TRCA is also either fixed in lower scale or reduced without objective assessment of work load.


In a recent judgment at CAT Bangalore, the bench observed that it is not possible even to GOD to assess the work of an official exactly and ordered protection of TRCA.  Further various courts have already delivered judgments protecting pay pocket of GDS.  It is also noticed that recently Audit officers are raising objections based on insufficient and incorrect information available during inspections.  Such audit paras are neither replied properly nor is the official given due opportunity to provide necessary information to protect TRCA.  So, the GDS affected would be put to untold hardship and misery because of the said reasons.


We, therefore, request you to extend the same protection of TRCA to other GDS officials also, providing them an opportunity to either augment their work or to defend their case effectively.


Further, recalling the discussion during Strike Charter, we request you to restore the TRCA of all GDS who are undergoing reduction of TRCA in the interest of natural justice and equity and for such act of judicious action of yours we are much thankful.

A DRAFT REPLY FORMAT IS GIVEN FOR SHOW CAUSE NOTICE

SHOW CAUSE NOTICE FOR PARTICIPATION OF STRIKE IS BEING ISSUED IN A FEW DIVISIONS. IT IS AS PER THE INSTRUCTIONS OF THE DIRECTORATE BEFORE COMMENCEMENT OF STRIKE.
A DRAFT REPLY FORMAT IS GIVEN FOR SHOW CAUSE NOTICE
The matter was brought to the notice of the Director, SR and DDG (Est) during the course of discussion on 22.10.2012 and it was assured to instruct the concerned wherever such problem is noticed.  Hence there is no need to agitate over the issue, please maintain peace.  A draft reply format is given:


I humbly submit that I have acted as per the direction of the union which has given notice for strike w.e.f 16.10.2012.  Since I have not acted in any manner to attract disciplinary action the principle of no work no pay may be applied in my case as the strike was peaceful.


I sincerely regret for the inconvenience caused in this regard as the circumstances was beyond my control.


Thanking you,
Yours faithfully,

Revolutionary Greetings and Hearty congratulations to all GDS comrades who have participated in the struggle of INDEFINITE STRIKE, went for 7 days, with strong conviction and dedication. We also sincerely thank those who have extended their support for the cause.

As per the collective decision of the highest forum of AIPEDEU that is Central Working Committee and All India convention, the notice for Indefinite strike was issued.  Accordingly there was tremendous response from the GDS this time all over the country.  There was no strike in Kerala Circle and in West Bengal Strike it was partial for the first time in the history of Struggles.  No federation, including Confederation of Central Government where Com.S.S.Mahadevaiah, General Secretary AIPEDEU is one of the All India office bearers, Asst Secretary, supports this justified cause.  Even moral support was also NOT extended till the end of the Strike.  Despite the fact GDS employees exhibited extraordinary courage during the strike period and conducted the programme of INDEFINITE STRIKE beyond our imagination.  It was almost total in most of the circles, cent percent in good many divisions. Hats off to one and all for their timely action in making the struggle a thundering success.   We need to know the correct picture of the number of participants’ division wise of each circle for publishing the same in the next Rural post, in the following format.


On 15.10.2012, during first round of discussion Protection of TRCA of BPM was handed over to us.  We appreciated the positive reaction of the department and thanked for the same.


When the Strike went 3rd day, the department requested us to withdraw strike on the basis of the order dated 15.10.2012.  There was no consensus on Strike Charter and we insisted that at least a Committee may be set up to examine the major No.1 demand of Departmentalisation of GDS employees.  We have submitted a document, RTI information revealing the facts about extracting work of GDS up to 8 hours.  The document is under examination.  However it was suggested to take up the issue with the next pay Commission.  Our suggestion to constitute a committee including staff side on this issue was not agreed to.  Since the issue of Bonus was rejected by Finance for the last 4 years we insisted that it should be resolved immediately.  Thus we had no other way but to continue Strike.


The Strike was intensified and we also sought the help of various MPs, Ministers and Union leaders in order to bring pressure upon the Department and the Finance Ministry.


A good number of GDS from neighboring circles arrived at the Delhi headquarters and staged demonstration on 18th and 19th of this month before Dak Bhavan and later in Jantar Mantar, New Delhi.  Since it was a peaceful strike we did not allow them to resort to violent action.


Some local officers in the divisions/circles started issuing notices to the GDS participating in the strike. Misleading activities to dilute Struggle was also seen during Strike. But the GDS employees were firm on their stand and continued to be in struggle till the end.


When the Strike entered 7th Day, we tried to meet Minister for Communication in vain as he was in tight schedule at Sanchar Bhavan.  Our efforts to bring pressure from MPs, Minister for Home, Labour etc. continued.  Reviewing the entire situation of Strike and possibility of consideration of demands like Bonus, regularization of GDS etc., it was decided to enter into an agreement with the department.  Accordingly another meeting was held with departmental officers who were cordial and discussion was with open mind.  We finally decided to call off the strike.


1.    Departmentalisation of GDS- Grant of Status:  Not agreed, asked to take up with the next Pay Commission.  We already have a demand of 7th Pay Commission for GDS and reviewing it at our level.  We also explore other remedies also.


4.    Abolition and filling up of posts – Department releasing instructions


5.    Compassionate appointment – note from union demanded and will be examined.


6.    VP Singh’s committee on Cash handling, pay protection, Cash conveyance etc. -  Order on protection issued for BPMs and another order for other under examination, other issues still  under consideration.


7.    New recruitment of Rules – Already under process, not agreed to.

We once again thank the organizers, well-wishers and GDS employees who have made the event possible for EFFECTIVE STRUGGLE, THE ULTIMATE FORM OF DIRECT ACTION A THUNDERING SUCCESS.  This struggle is a milestone in the history GDS TU movement.  We shall advance with same commitment and determination towards realizing our justified DEMANDS.