ALL INDIA GRAMIN DAK SEVAKS UNION CONVEY MAY DAY GREETINGS TO ALL.


ALL INDIA GRAMIN DAK SEVAKS UNION CONVEY MAY DAY GREETINGS TO ALL.

ALLOW NOT SITUATION GOES OUT OF CONTROL……, ARE WE FORCED TO TURN VIOLENT……………?

Kudos to the GARMENT WORKERS for their HISTORIC SUCCESSFUL STRUGGLE culminated with instant protest, indomitable courage and in making the Central Government to roll back Provident Fund withdrawal norms.  It was a spontaneous action, within a few minutes message of uniform action reached all who were in streets.  There was a traffic jam for 5-6 hours in the busy roads of Bengaluru.  Protest turned into violence when the police could not control the mob.

The struggle reminded me of BONUS struggle in 1996 which was also without notice and preparation.

Enmass jumping into action, putting heart and soul into the movement is the only STRUGLLE IN TRUE SPIRIT!  Such struggle in postal from GRAMIN DAK SEVAK is not too far …………….?

TOTAL STRIKE against the system is the only solution, history of struggles remind us very often of this reality.  This is the reason why we could not resort to Trade union action when JUSTICE COMMITTEE  was denied to us, we had written to all the three federations to join hands with us but in vain.  We are determined to FIGHT TO THE LAST and inorder to get fair deal from the present bureaucracy we need to further strengthen our nerves.  The slogan of DO OR DIE shall be forced on those who are the stumbling block in our way to GOAL. Should we learn/follow the ART OF PROTEST from the unorganised workers like Garment workers of Bengaluru?

While working strategy for future struggles we need to consciously look into the WEAK LINK in our movement.  The inner threat is causing more concern than outer (dept/govt).  Even now it is not too late to work for united movement of GDS and it is time to forget and forgive.  In open mind and in the interest of GRAMIN DAK SEVAKS,
the subject of humility, neglect and exploitation, we call upon each and everyone to work for UNITY, UNITY AND UNITY ALONE.  For at the end of the tunnel is LIGHT and at the end the struggle is VICTORY.

We talk less on verification of membership which is expected soon.  WE CAN READ THE MIND OF THE COMMON WORKER/GDS WHO IS THE MAIN NERVE OF THE GDS MOVEMENT UNDER A.I.G.D.SU.  Having conducted series of struggles we are looking forward for another struggle perhaps the ULTIMATE STRUGGLE which is possible if any only if each and every GDS respond truly to the call of the AIGDSU, THUS WE ANTICIPATE WHOLE HEARTED MEMBERSHIP AND VOLUNTORY RETURN TO THE MOTHER ORGANISATION AIGDSU.  Do not fall prey to the false assurances and RUMOURS during verification of membership.  AIGDSU is the organisation of GDS, for the GDS and by the GDS. 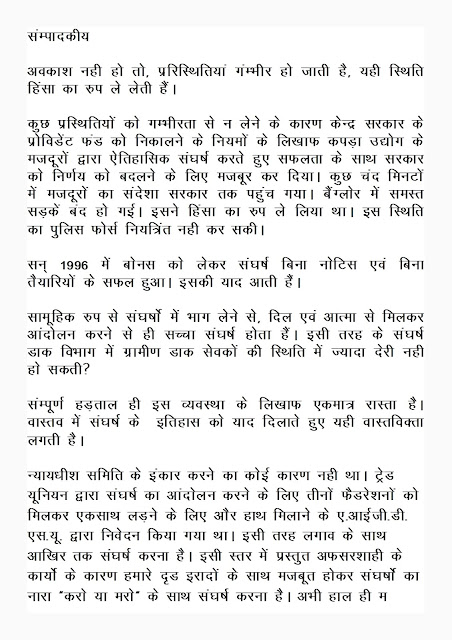 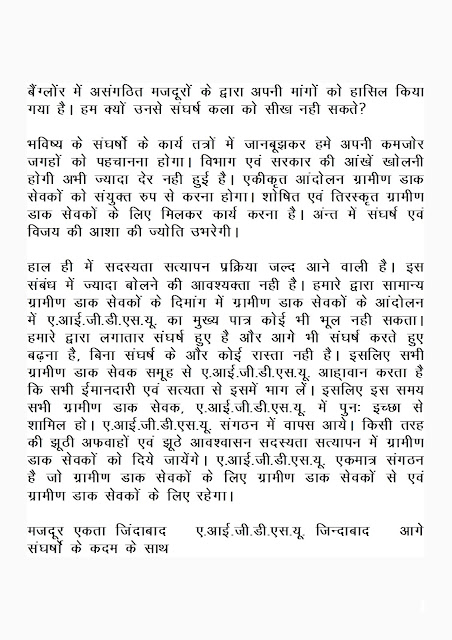 Posted by RURAL POSTAL EMPLOYEES at 11:19 AM

GDS Committee called AIGDSU for Oral evidence on 25th May, 2016. 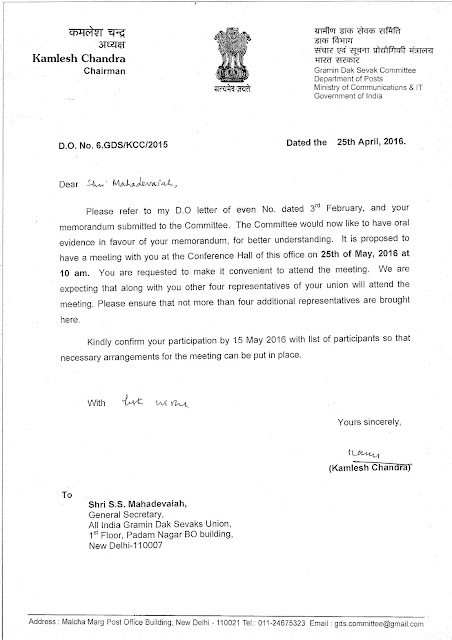 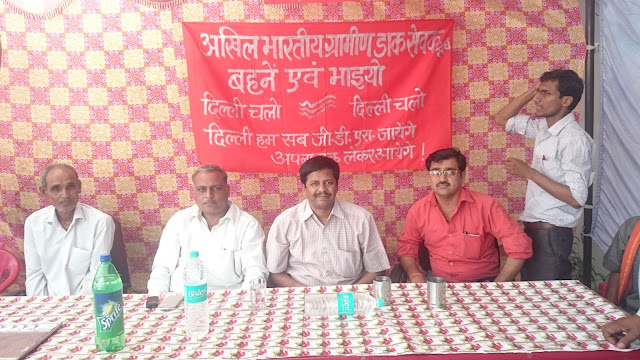 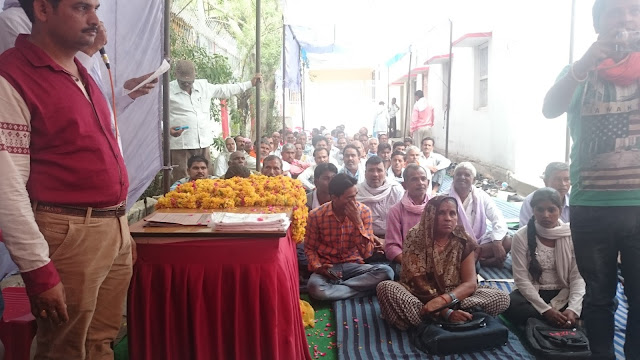 The reception committee under the leadership Com. P.R. Das, Com. Ramesh Mukkad and Com. A.K. Mahapatra and other comrades made excellent conducted council. 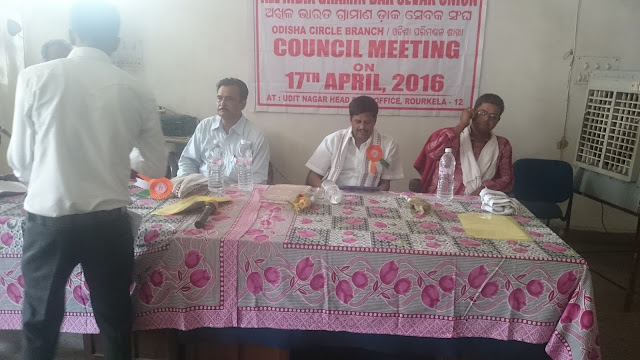 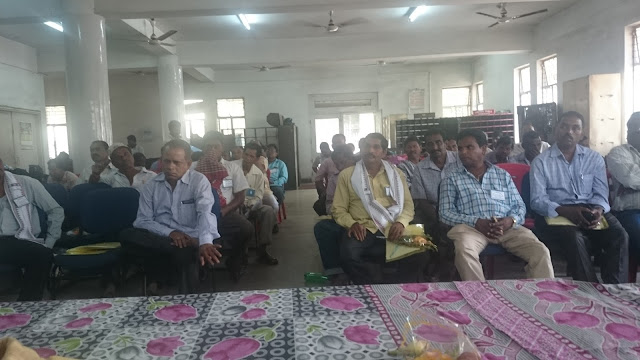 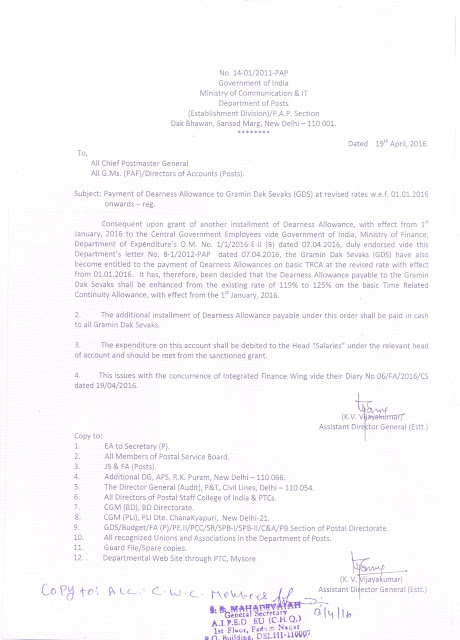 Rs. 30/- including postage. If needed please send money order or DD to the CHQ. Right now Available in English, Hindi version will be published shortly.

Posted by RURAL POSTAL EMPLOYEES at 11:57 AM

The great Indian social reformer and Constitution maker, The voice of exploited and Weaker section who fought for the rights, equality and humanity all over the country.

Hats Off to the Great personality.
Posted by RURAL POSTAL EMPLOYEES at 5:35 PM