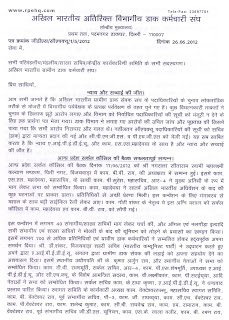 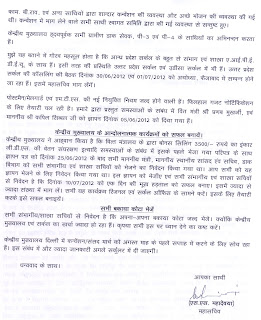 
You are all aware that the election of office bearers of CHQ were elected democratically in Mozre under the direct supervison of Departmental observer.  Some of the desruptive forces made false allegations against the elections and a letter was submitted to the secretary (posts) requesting not to approve the elected body.  The department of posts made proper and thorough enquiries on the allegations and found that all the allegations were baseless and false Consequently the list of office bearers of CHQ was approved by the Secretary (Posts) and the same was circulated to all CPMGS and PMGS. This proves the justice is with Com. S.S. Mahadevaiah truth triumphs and justice wins. The approved copy is enclosed herewith this circular.


Circle council of AIPEDEU of Andhra Pradesh was held on 17-6-2012 at Sri nagarala Seetha Rama Swamy, Mahalakshmi Ammavarla Kalyana Mandapam, in chittinagar, Vijayawada under the able presidentship of circle president Com. B.V. Rao. The General Secretary Com. S.S. Mahadevaiah and general secretary of R4 Com. P.Suresh attended as chief Guests and addressed the counicl. Com. S.S. Mahadevaiah effectively and eleborately analysed the developments took place after the 7th All India Conference. A well response came from the house A martyrs flame was brought from Gannavaram by Mega cycle rally under the guidence of Com. B. Gowrisankar and his team.  The flame was handed over to S.S. Mahadevaiah and B.V. Rao.


More than forty (40) Divisional/ Branches participated in the council besides convenors of Ongole and Nalgonda ad-hoc Committies. All the divisional and ad-hoc committee convenors, condemened the happenings that took place in Mozri Maharastra.


More than 700 delegates and visitors attended the council and extended their heartful co-operation to AIPEDEU.


The city CPI secretary com. Donepudi Sankar, inaugarated the council and extended his support to the struggles of AIPEDEU for the welfare of the down trodden and low paid employees. The famous industrialist Sri. Kakumanu Krishnarjuna Rao sent his greetings through a message and wished the council a grand success.


The circle secretary of AIPEDEU of A.P. Circle Com. K. Radha Krishna pronounced the vote of thanks.


All the participants satisfied with the arrangements made by the reception committee CHQ extends heartful greetings to all the comrades of ED, P3 and P4  for making thundering success of the council.


We proudly to say that most of the Divisions Branches are with AIPEDEU in Andhra Pradesh. The same position prevailed in Orissa and U.P.


The new recruitment rules of post man and MTS may be expected shortly.  The law ministry cleared the file and the in gezette notification will be published. We submitted memorandum on pressing problems of GDS to the finance Minister Sri. Pranab Mukharji on         05-06-2012.


The CHQ issued for programmes against the decision of Finance ministry regarding enhancement Rs. 3,500/- bonus to GDS Pay protection and other problems as stated in our previous circular sending memorandum on 25/6/2012 to Ministers. MPs and the Secretary, Department of Post. All our divisional Br. secretaries are requested to mobalize our members in large number making the 10th July hunger fast programme at regional and circle offices.


Divisional Branch secretaries are requested to remitt quota to CHQ and Circle immediately.  Heavy expenditure is there to maintain CHQ & Circle Union.


With revolutionary greetings.
Yours comradely, 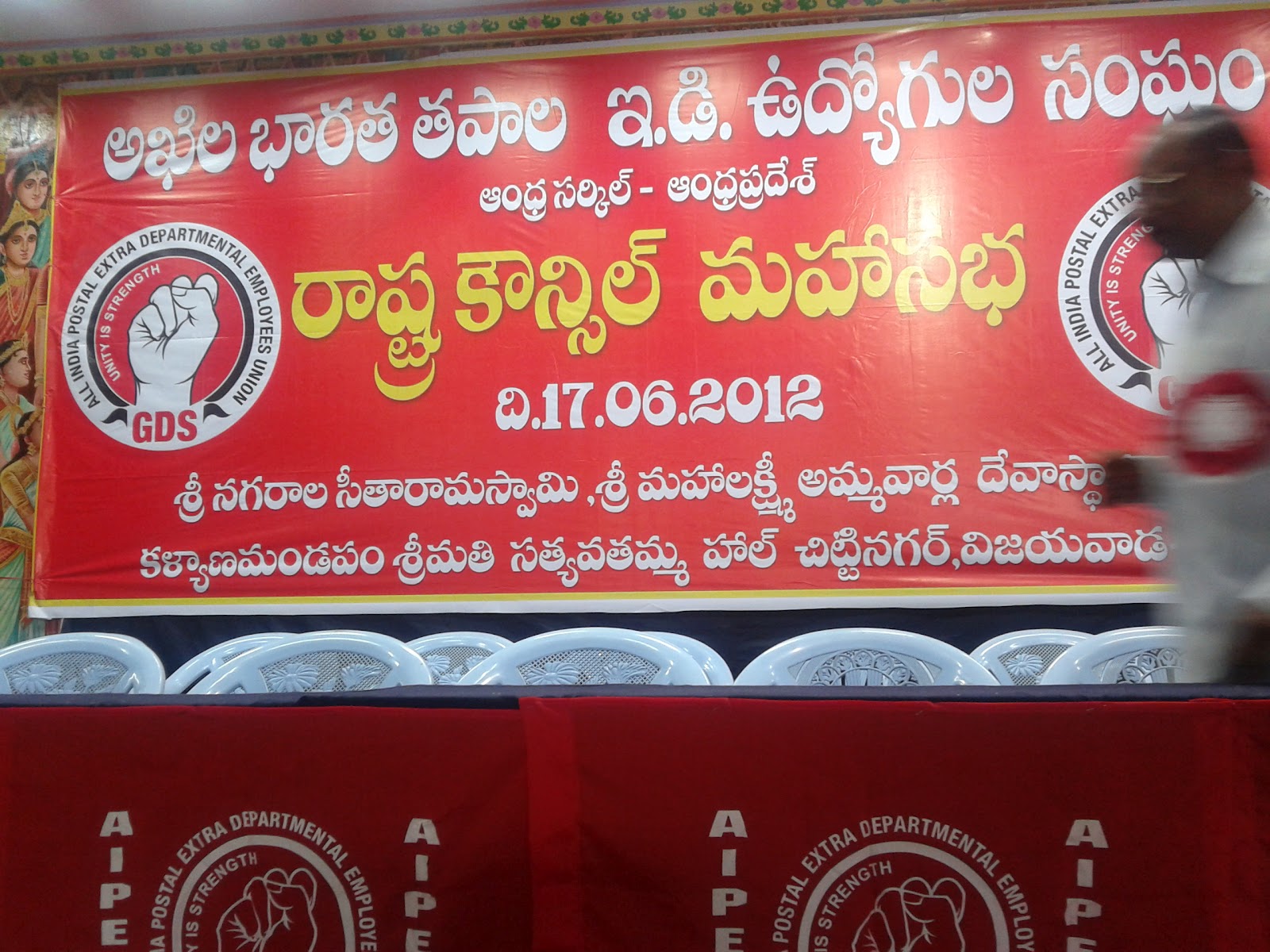 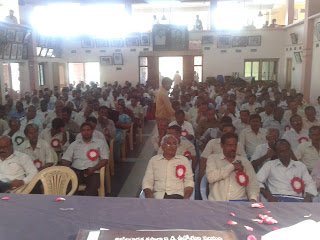 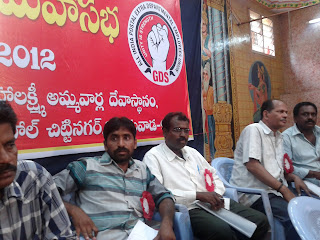 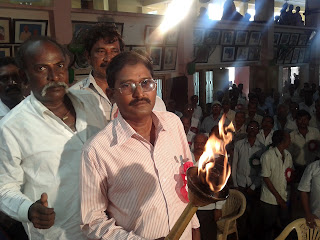 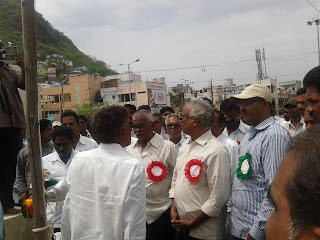 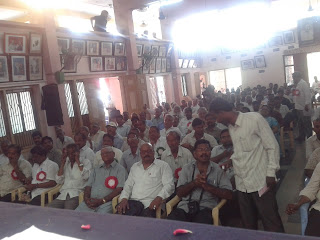 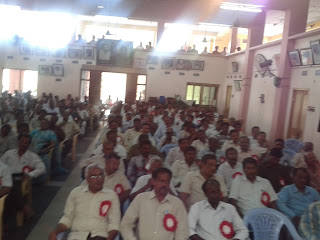 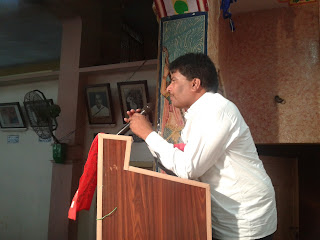 THE CIRCLE CONVENTION OF AIPEDEU


ARE ATTENDING THE CONVENTION


All Circle Office bearers, Divisional / Branch Secretaries, of A.P Circle are invited to the Convention
Posted by RURAL POSTAL EMPLOYEES at 12:05 PM

Election of new office bearers of AIPEDEU elected at its 7th AIC held from 6-8th April,2012 in Amravati Maharashtra

Election of new office bearers of AIPEDEU elected at its 7th AIC held from 6-8th April,2012 in Amravati Maharashtra 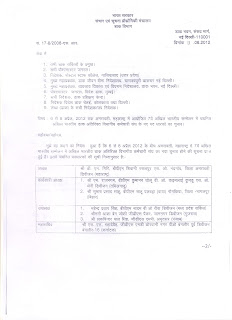 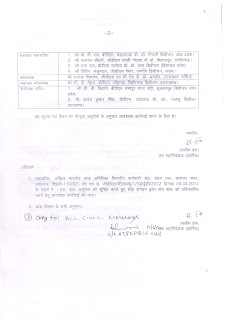 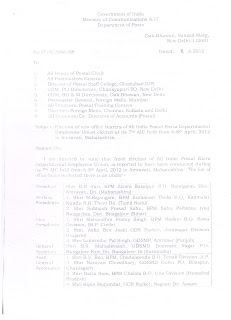 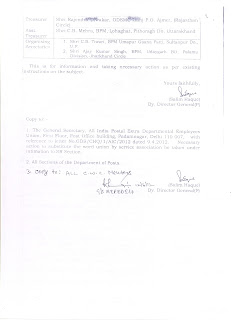 The memorandum enclosed a/w this letter. Send the memorandum to the following addresses on 25-06-2012
Please click below link for Memorandum.

Rs. 3500/- bonus ceiling to GDS has been rejected by the finance ministry despite the Postal Board sent the note positively. The recommendations of Group of officers Committee headed by V.P. Singh will be implemented soon. The issue of revision of cash allowance; The file has been put up to IFA (internal finance) for approval. New proposal Rs 50/- per occasion instead of month, from B.O. to a/w office, now department further examining to sanction the allowance to the BPMs when he collects amount from account office to B.O. This may be extended to MNREGS and other new services.

A five men committee recommendation is under active consideration by IFA. We hope that orders may be issued soon. Like cash handling as Rs. 10000/- per point instead of Rs. 20000/-. Pay Protection of TRCA.

For newly appointed GDS the TRCA will be granted on the basis of existing work load of the BO instead of minimum TRCA as per the existing rules.

New recruitment rules for postmen and MTS (Group ‘D’) will be issued soon by Department of Posts.

To oppose the decision of the finance ministry the following programme of action is observed. We requested the Minister to reconsider the decision on bonus ceiling.

1) On 24-06-2012 convene Divisional executive body meetings and obtain the signatures of the divisional CWC members on the memorandum enclosed a/w this letter. Send the memorandum to the following addresses on 25-06-2012 without fail. Memorandum Copy
MAKE JULY 10TH 2012 DAY LONG HUNGER FAST AT REGIONAL/CIRCLE OFFICES GRAND SUCCESS.

If the Demands will not be settled on or before July 10th, further course of action including direct Trade Union action will be decided in the National Convention held at Delhi in the Month of July/August 2012.

All our Circle Secretaries are requested to convene state level conventions in the month of June/July 2012.
With revolutionary greetings.
Yours comradely,

Gross injustice and discrimination against Gramin Dak Sevak employees of the Department of Posts.

Letter to Govt.
Posted by RURAL POSTAL EMPLOYEES at 6:40 PM 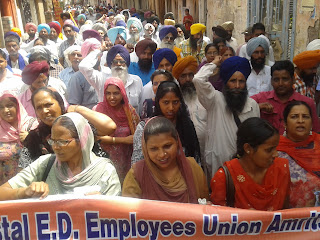 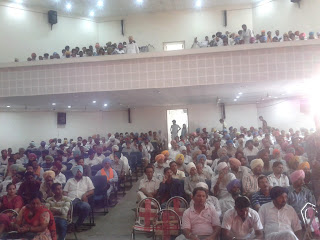 
A glorious and historic convention of Punjab Circle was held in Kapurthala on 3rd June, 2012 Sunday. A massive procession was conducted from Shalimar Bagh to Vidya Vihar with more than 1000 GDS Comrades with flags of AIPEDEU in hands. The streets of Kapurthala resounded with the slogans of GDS comrades and trumpets. 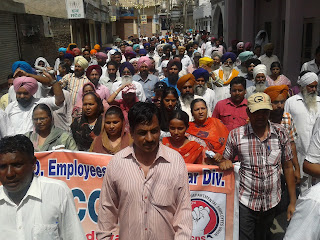 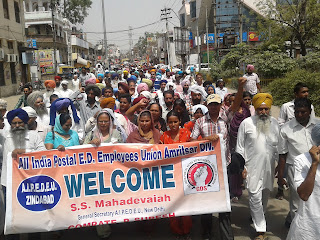 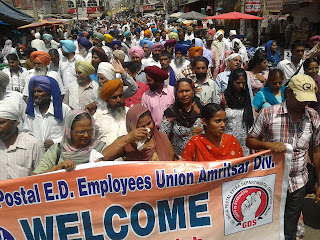 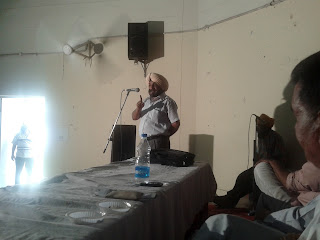 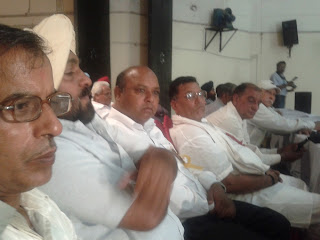 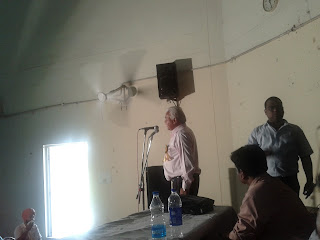 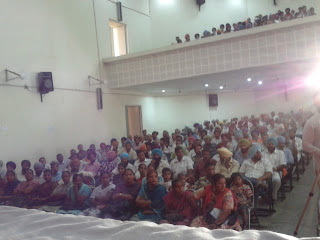 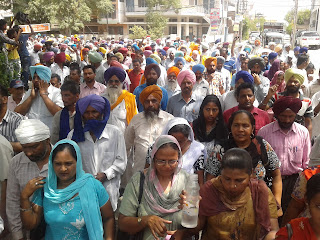