our letter reg-Inclusion of issues of GDS within the purview of term of 7th Central Pay Commission/ appointment of an committee under a retired Judge of Supreme Court or a High Court. 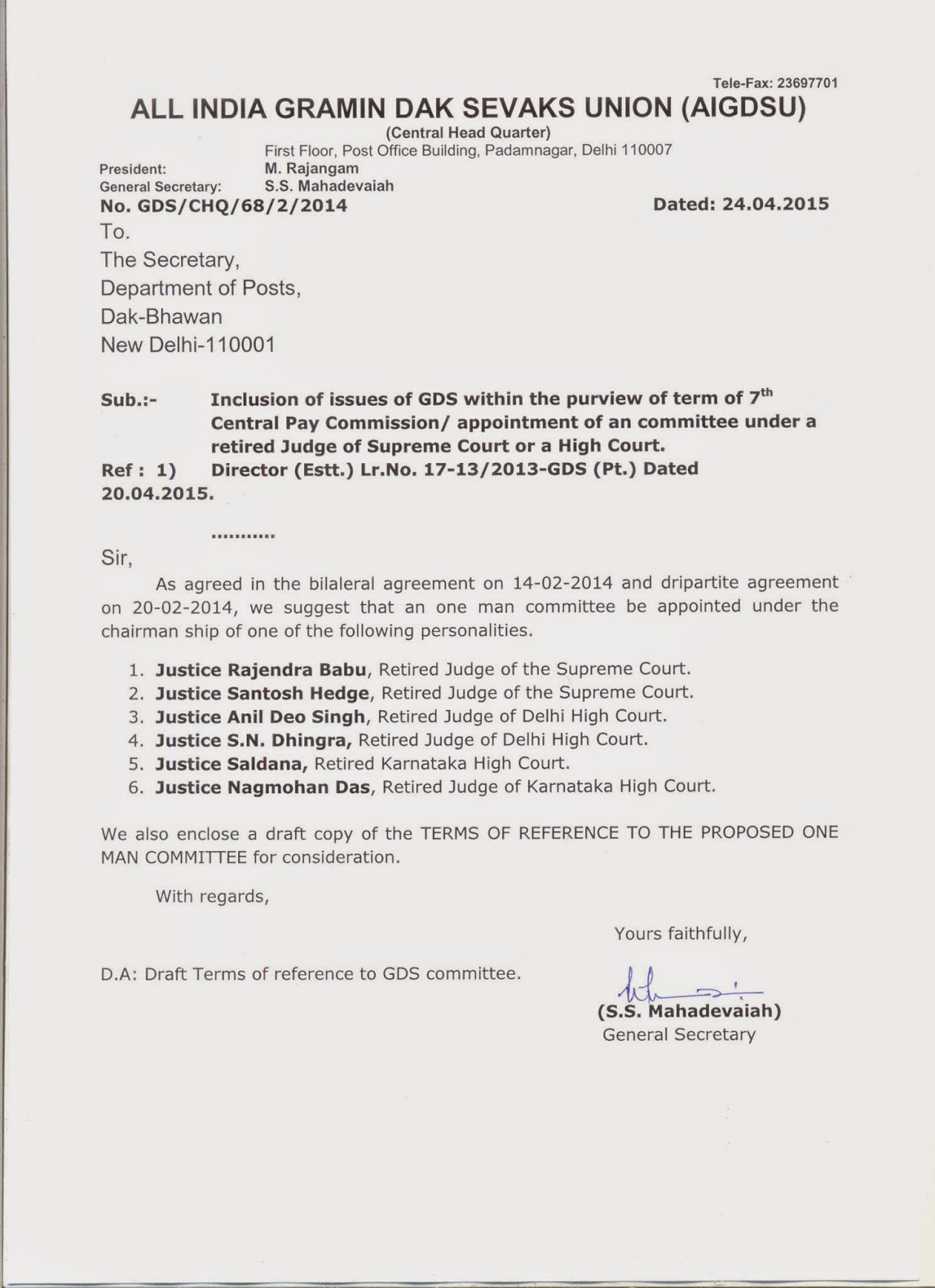 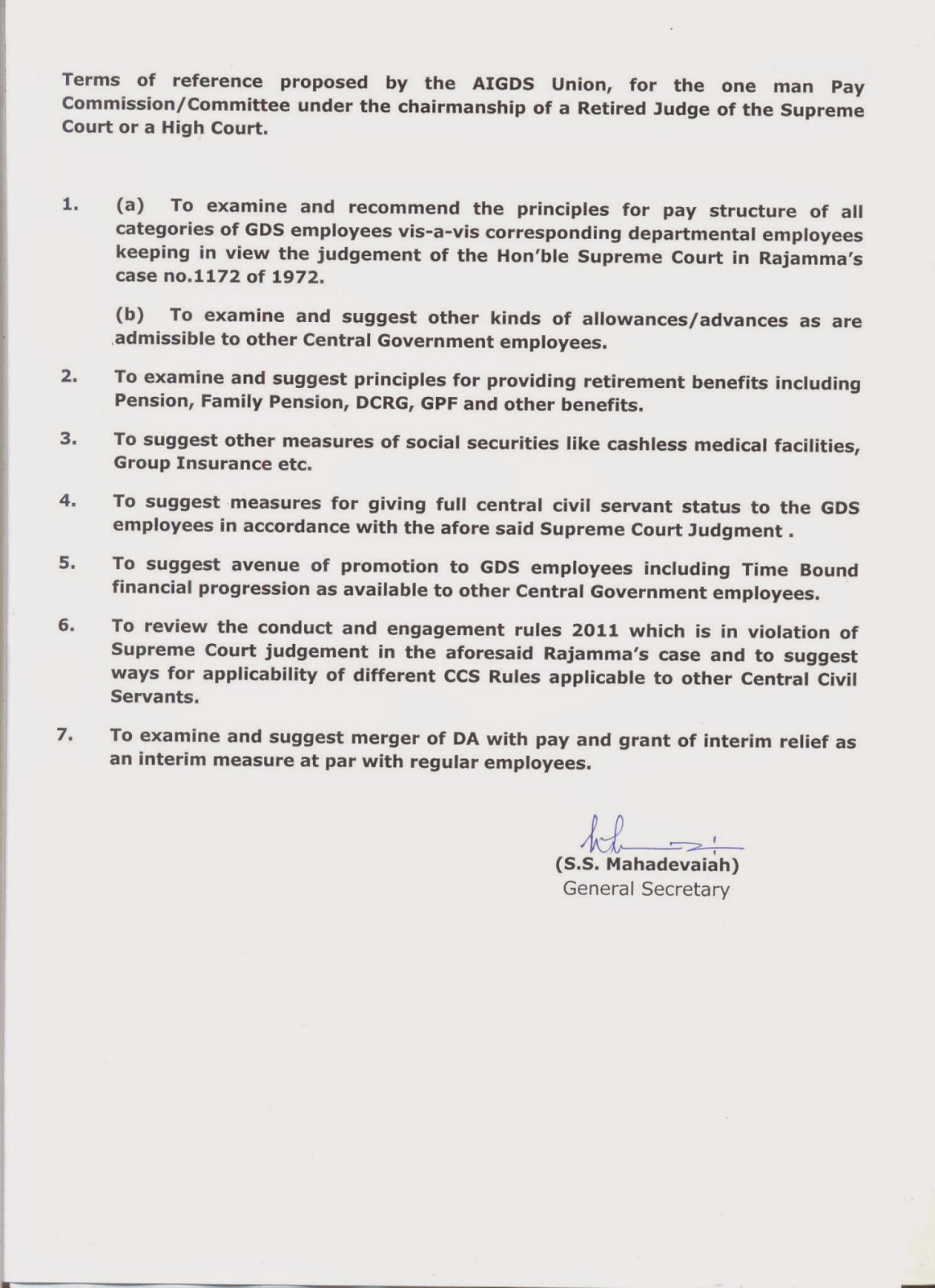 Ministry of Finance Rejected Inclusion of GDS under 7th CPC. 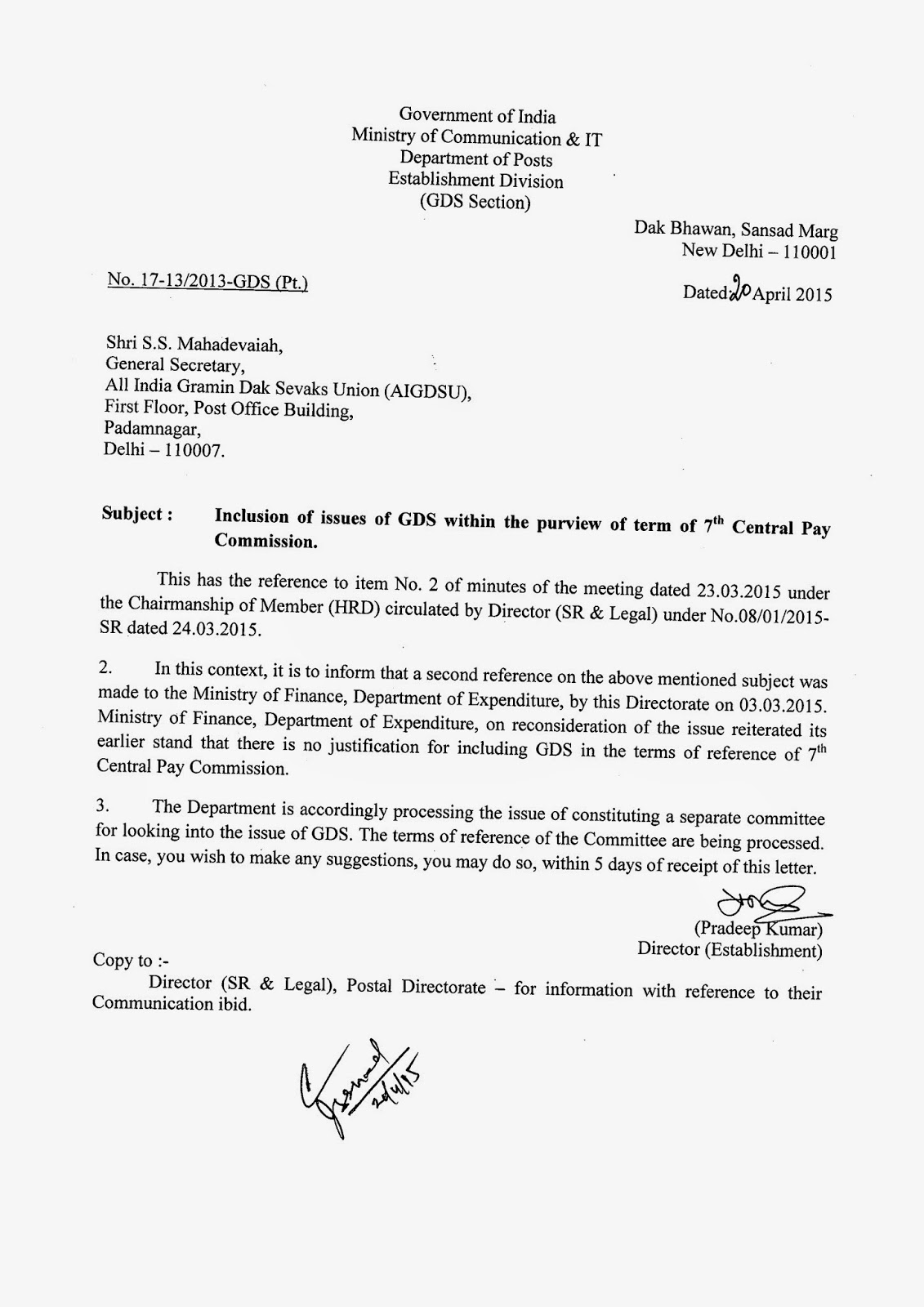 MINISTRY OF FINANCE, DEPARTMENT OF EXPENDITURE, HAS REJECTED OUR DEMAND FOR INCLUSION OF GDS ISSUES WITHIN THE PURVIEW OF 7TH CPC.

NOW THE DEPARTMENT IS SEEKING SUGGESTIONS FROM US, AIGDSU.  PLEASE SEE OUR WEB SITE FOR DETAILS AND SEND YOUR SUGGESTIONS, IF ANY, IMMEDIATELY. 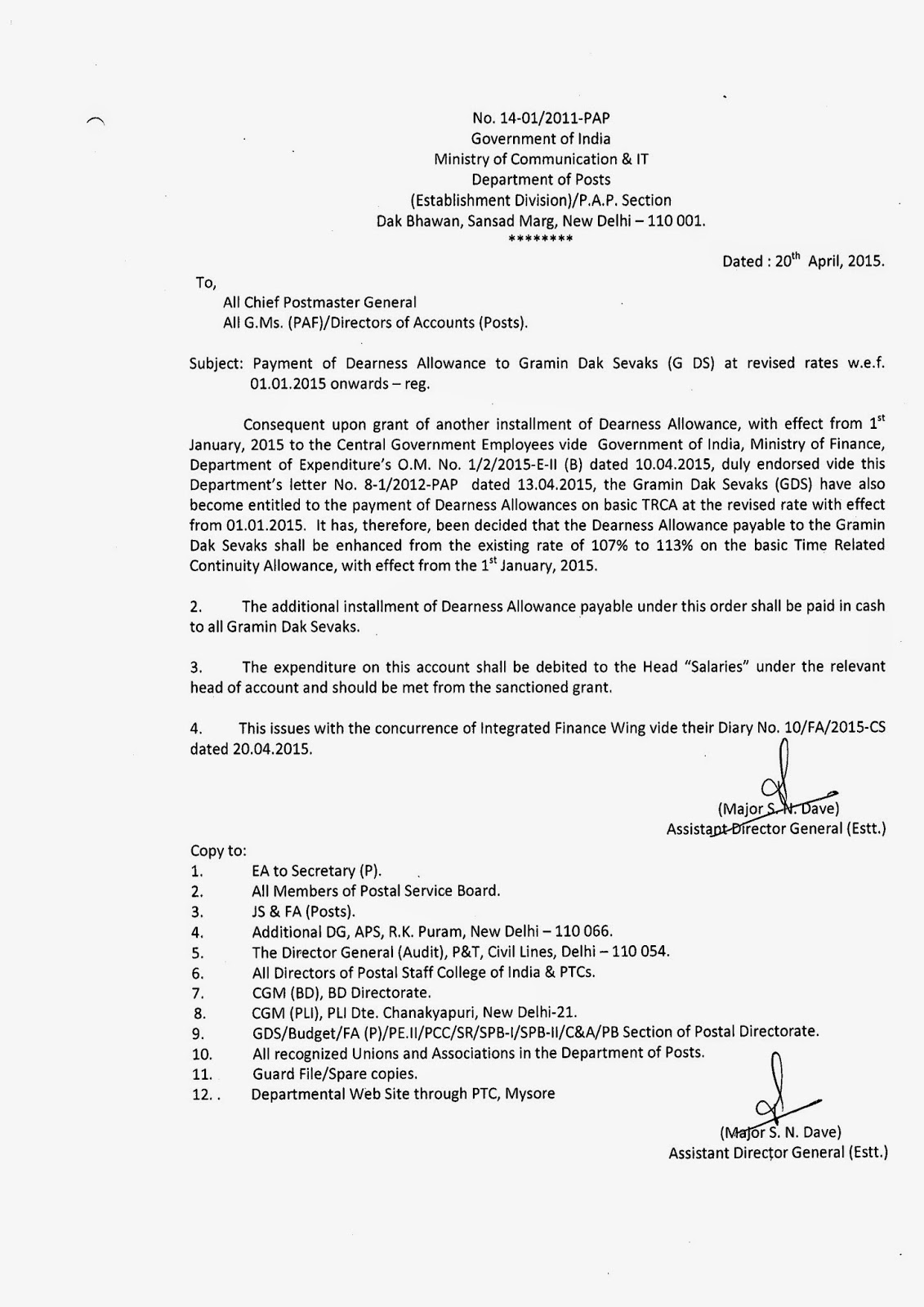 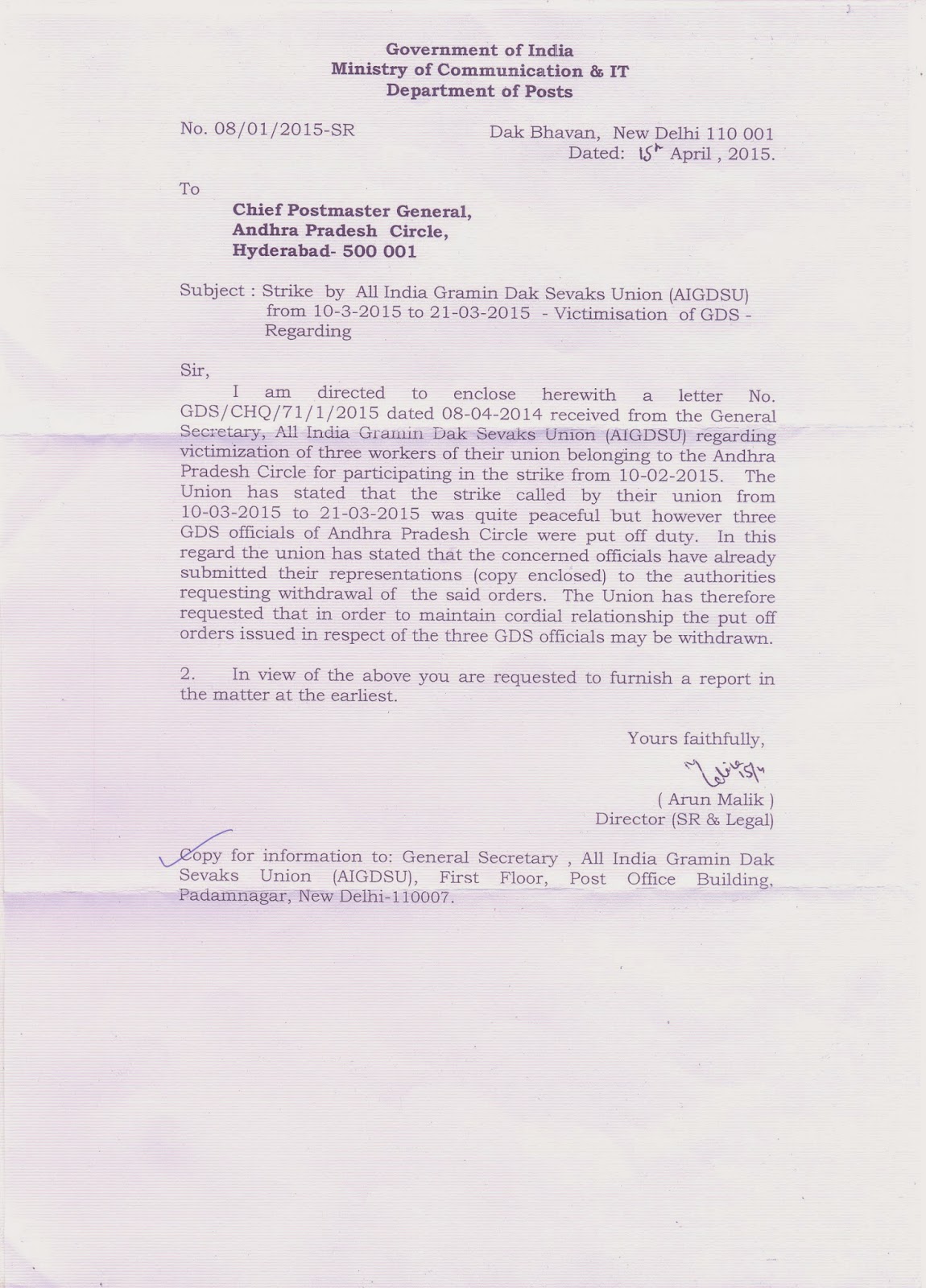 
Subject:- Victimisation of workers of this union for participation in the


The strike called by this union which started on 10.03.2015 and was called off on 20.02.2015 was exemplarily peaceful and no disturbance what so ever or violence or disruption occurred at all and the strike was called off in an atmosphere of cordiality and tranquility. We appreciate that the administration also did not resort to any kind of victimization or witch-hunting. But there has been a scar inflicted on the peaceful and happy relations inflicted in Andhra Pradesh Circle where three put off duty orders of (1) Sri V. Lakshmikanth (2) Sri Krishna Yadav (3) Sri Sharma in Karnool, Ananthpur and Suryapet divisions have been ordered after the strike was called off. These are instance which are marring the happy relations that we are maintaining with the administration.


We, therefore, request you kindly to advise the Andhra Pradesh Circle administration to withdraw the put off duty orders which will further strengthen our cordial relations. The concerned officials have already submitted their representations requesting withdrawal of these put off duties. 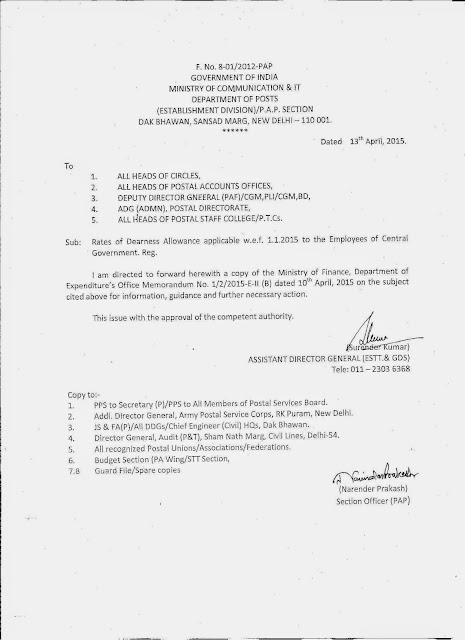 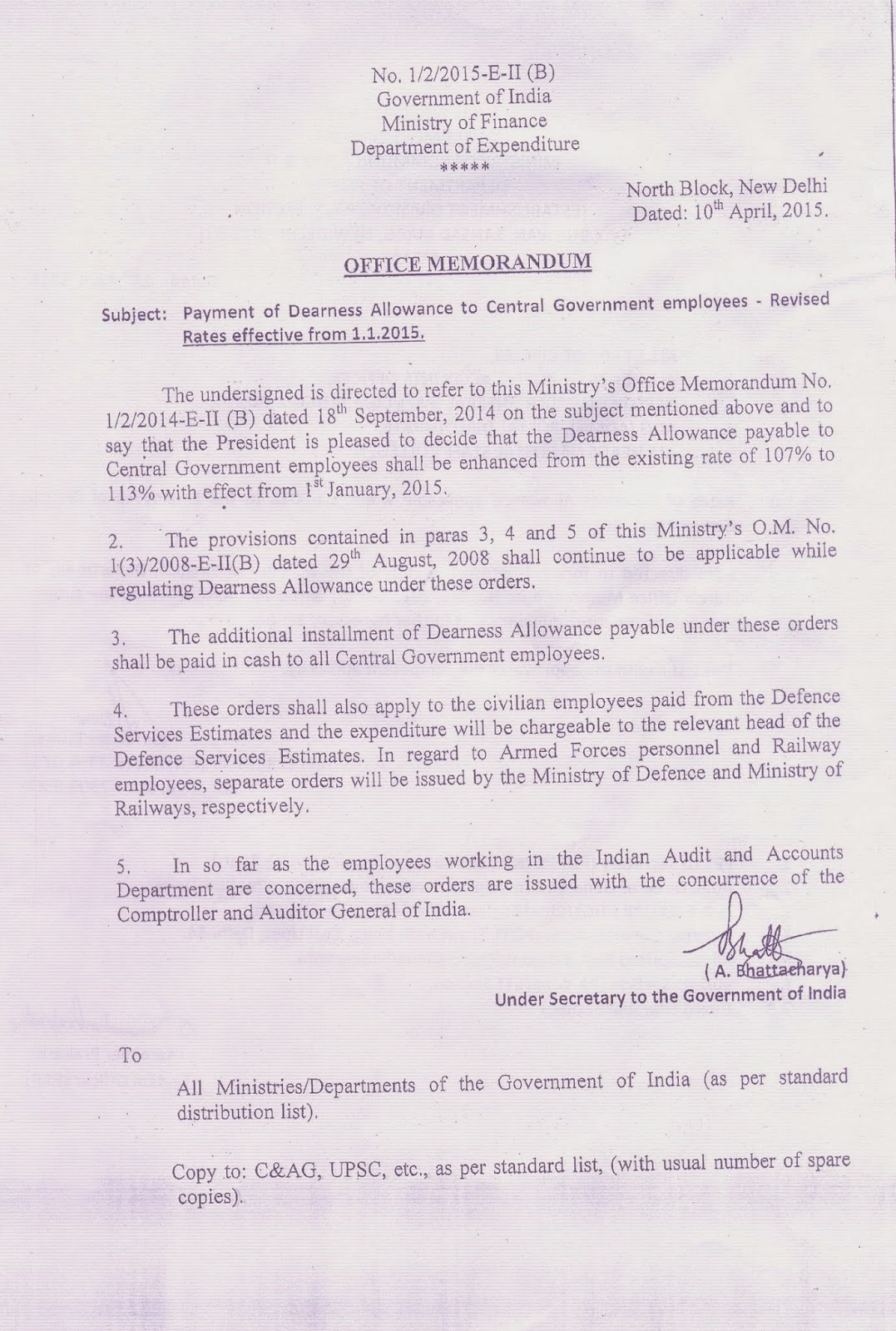 Letter reg- Non filling of GDS vacancies other than BPMs and unscientific norms for compassionate appointments-Reg.

Subject:- Non filling of GDS vacancies other than BPMs    and  unscientific norms for compassionate appointments-Reg.

This union learnt that the Department of posts appointed a committee under your Chairmanship to examine the issues cited in the subject.

We submitted that GDS vacancies other than BPM kept unfilled in so many Circles. The Department is ordering combination of duties when the GDS post fall vacant. The GDS BPMs are attending the duty of GDS MD under combination of duty in addition to his regular BPM work. Sometimes he has to attend GDS MD and GDS MC duties also.

You are aware that sir there are nearly 2.4 Gram panchayats in our country and each Gram panchayat is having more than five villages averagely. But there are One Lakh Thirty Thousand Branch offices exist at present in the Department of post to serve the rural people in Six Lakh Villeges. More over the distance between one village and other is minimum ten kilometers. Under these circumstances it is too difficult the BPMs to attend the work of two or three posts under combination of duties. Hence this union is requesting to suggest the Department to fill all the unfilled vacancies of GDS other than BPMs. GDS MC and packers has to travel more than 60 K.M. for conveyance of the Mail Bag.

This union extended heartfelt thanks for your favourable orders issued in the month of Jan, 2014 for GDS officials. We hope a favourable and positive recommendations regarding the above two issues.

With regards
Yours faithfully,
Posted by RURAL POSTAL EMPLOYEES at 12:18 PM 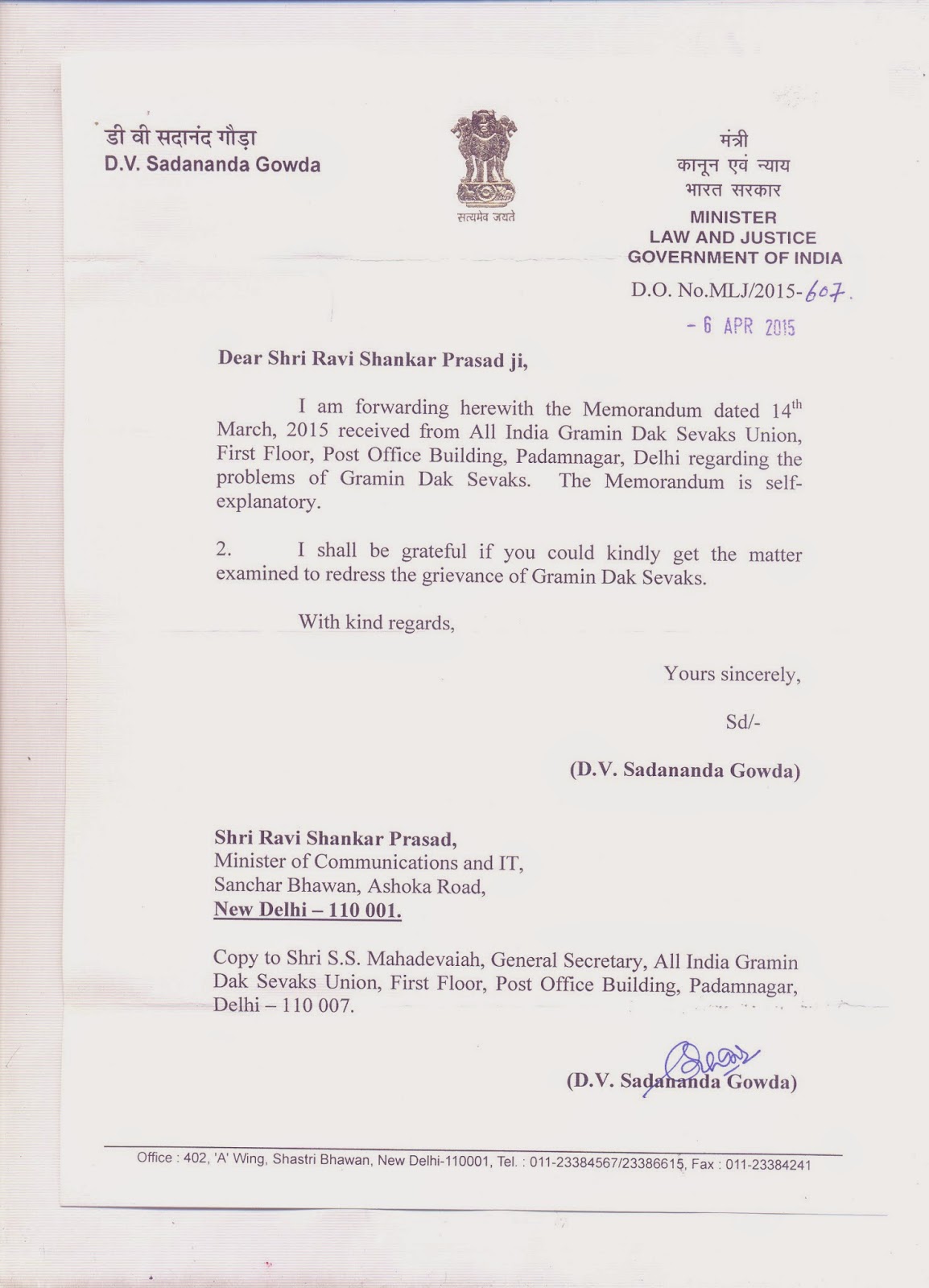 
Hence, Central Government employees as well as pensioners are entitled for DA/DR at the rate of 113 percent of the basic pay with effect from 01.01.2015. The increase is in accordance with the accepted formula based on the recommendations of the 6th Central Pay Commission.

This will benefit 48 lakh government employees and 55 lakh pensioners.

I am directed to forwarded herewith a copy of Department of Posts (Postman and Mail Guard) Recruitment (Amendment) Rules, 2014 notified in the Gazette of India, Extraordinary, Part-II Section 3-Sub-section (i) dated 17th December, 2014.
2.       It is requested that the amendment in the Recruitment Rules may be brought to the notice of all concerned.
Yours faithfully,

(N.T. Paite)
Director (SPN)
MINISTRY OF COMMUNICATIONS AND INFORMATION TECHNOLOBY
(Department of Posts)
NOTIFICATION
New Delhi, the 17th December, 2014
G.S.R. 901(E).—in exercise of the powers conferred by the provisio to article 309 of the constitution, the President hereby makes the following rules further to amend the Department of Posts (Postman and Mail Guard) Recruitment Rules, 2010, namely:- 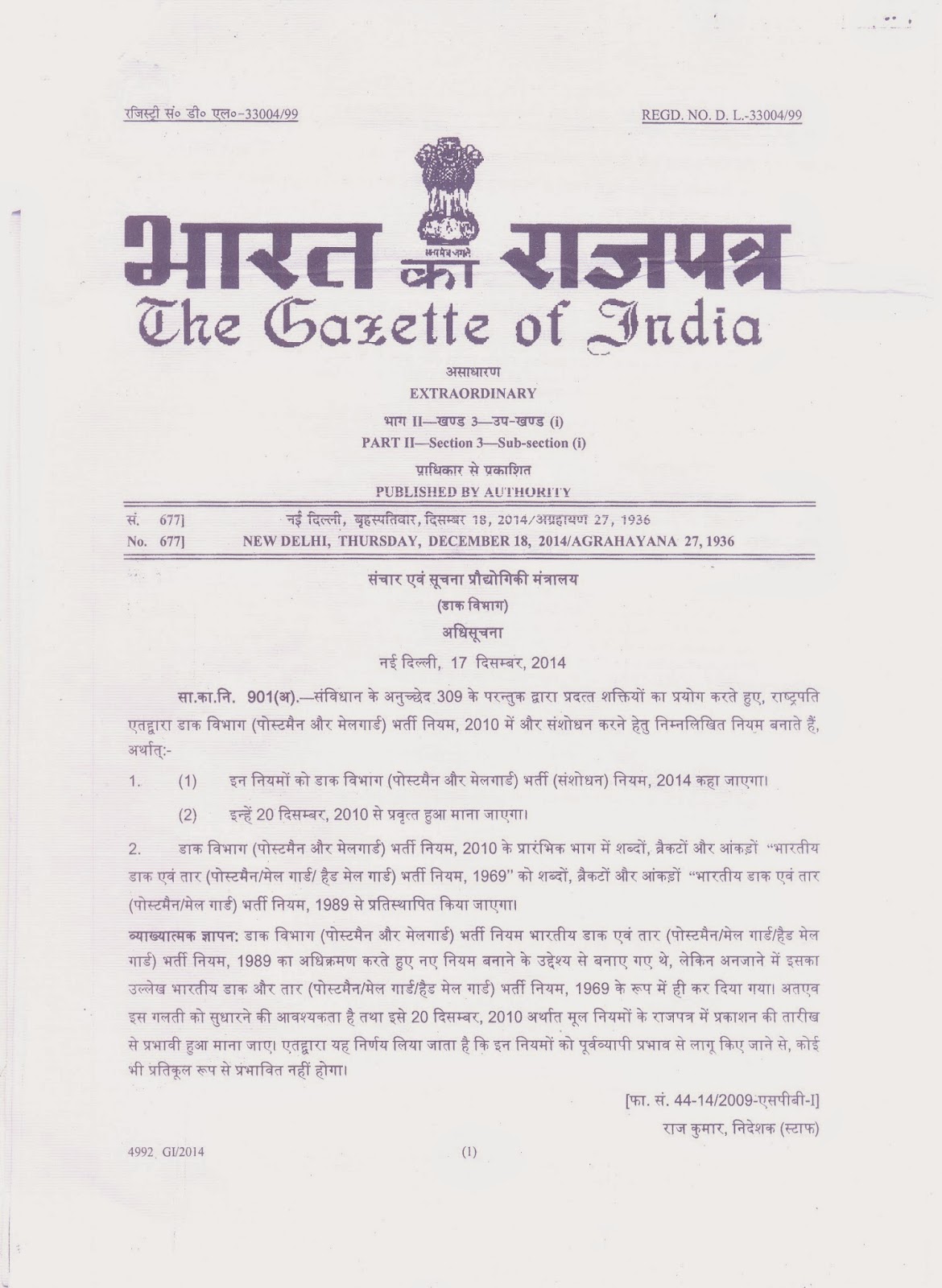 Cabinet approval on DA is likely to
hike this week
The Union Cabinet is expected to make the formal approval for the 6% Dearness Allowance hike for the Central Government employees this week. As per the calculation DA, from January 2015 will be 113% i.e. a hike of 6%. How ever the finance ministry will have to issue the order before the DA with arrears can be disbursed. The order may again take two to three weeks.

The office memorandum shown as from the ministry of finance that the much-awaited dearness allowance had been increased by eight percentage points, higher than the expected six percentage point increase was only an April fools day prank. The memorandum as shown as, numbered 1/2/2015-E.11 (B), dated March 30, 2015, and duly signed by an undersecretary in the department of expenditure, said the President was pleased to decide that the dearness allowance payable to central government employees shall be enhanced from the existing rate of 107 per cent to 115 per cent with effect from January 1, 2015.

The department of expenditure issued a clarification saying the memorandum was fake and no such instructions had been issued by the ministry.

"Accordingly, all ministries, departments and central government offices are hereby advised not to take cognisance of these fake instructions being circulated in government offices," the clarification posted on the website of the finance ministry said.

Though the government was quick to spot the mistake, which concerned thousands of government employees, questions remain how such an authentic office memorandum was drafted and issued without necessary checks.
Posted by RURAL POSTAL EMPLOYEES at 12:32 PM 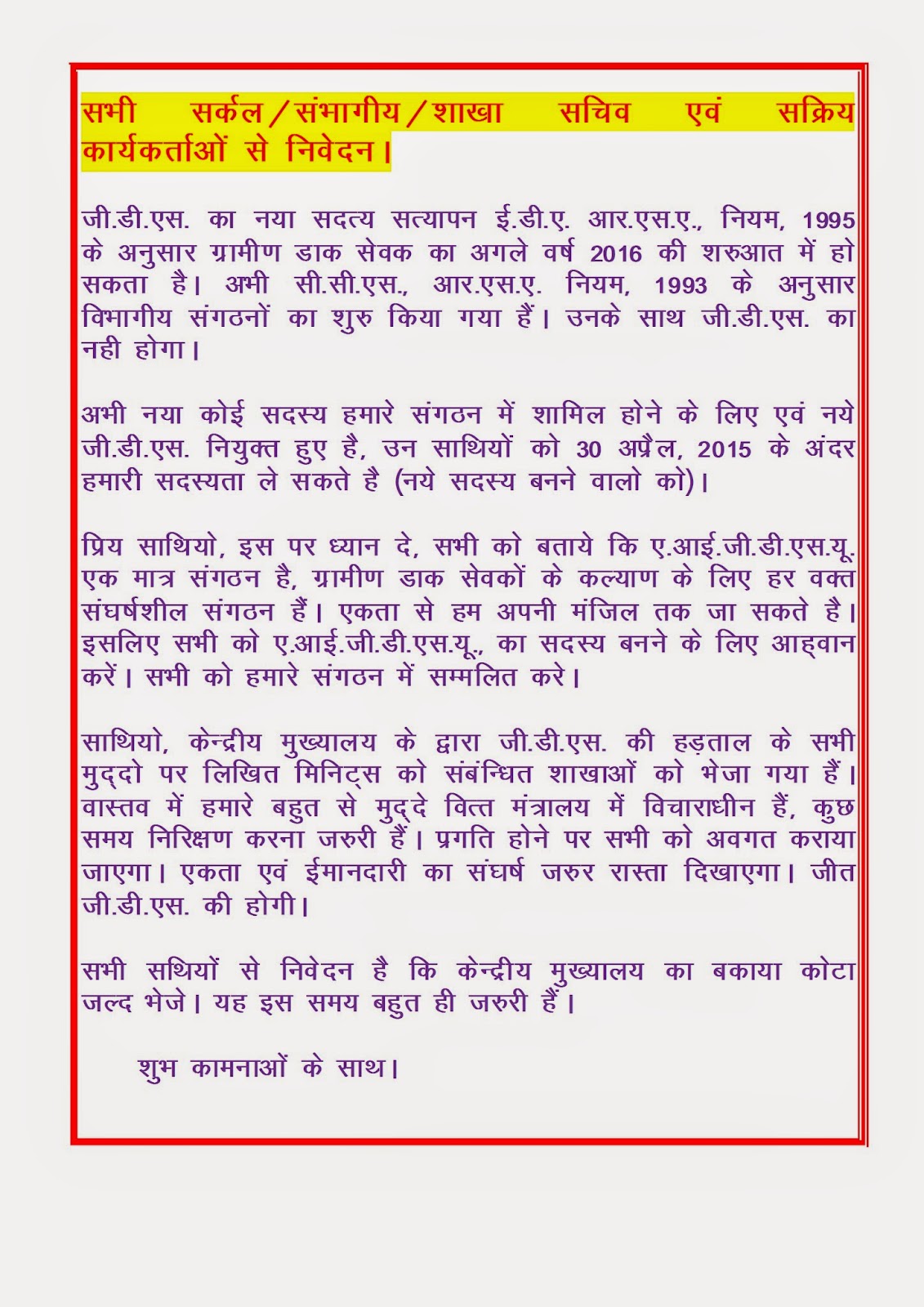 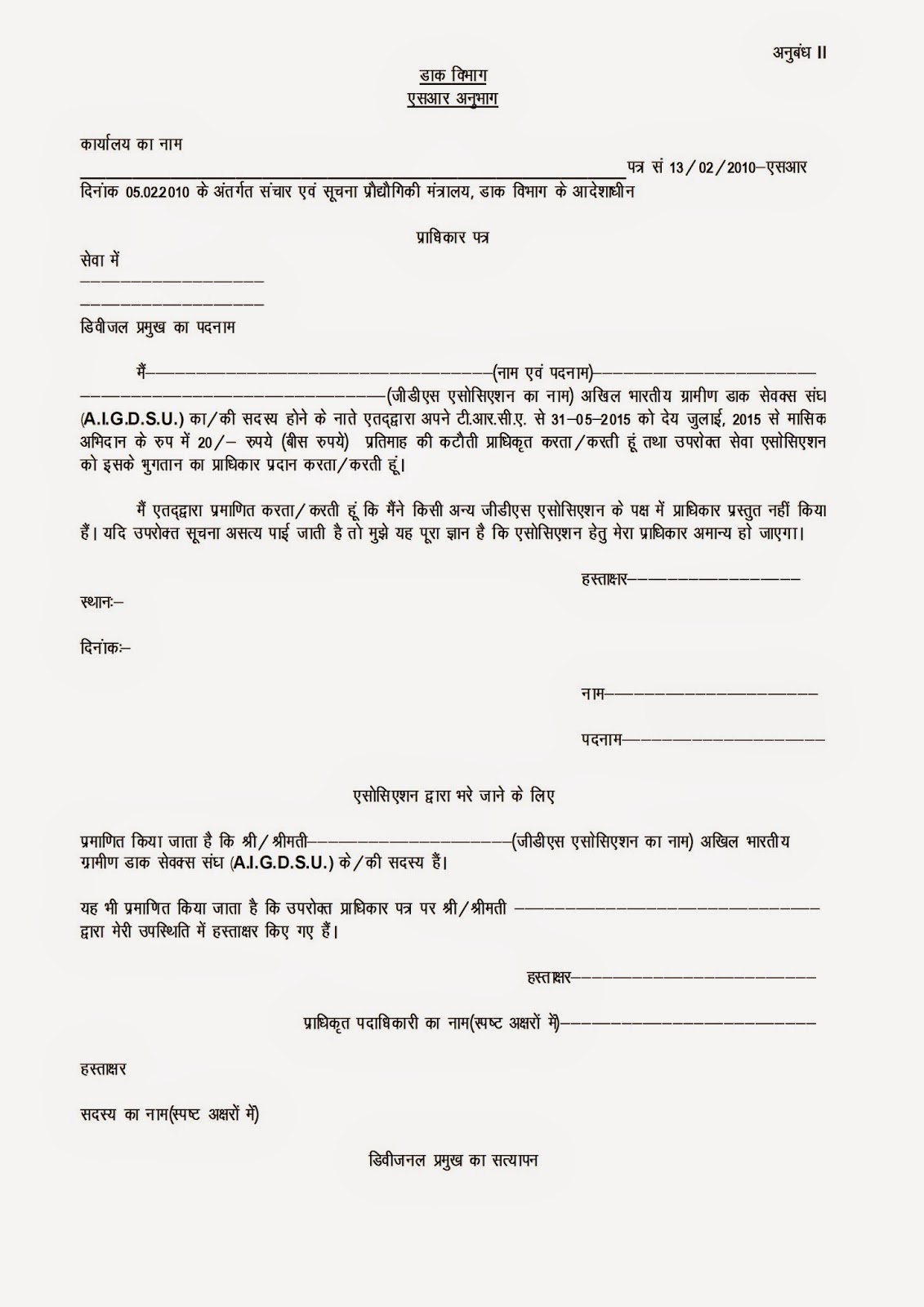 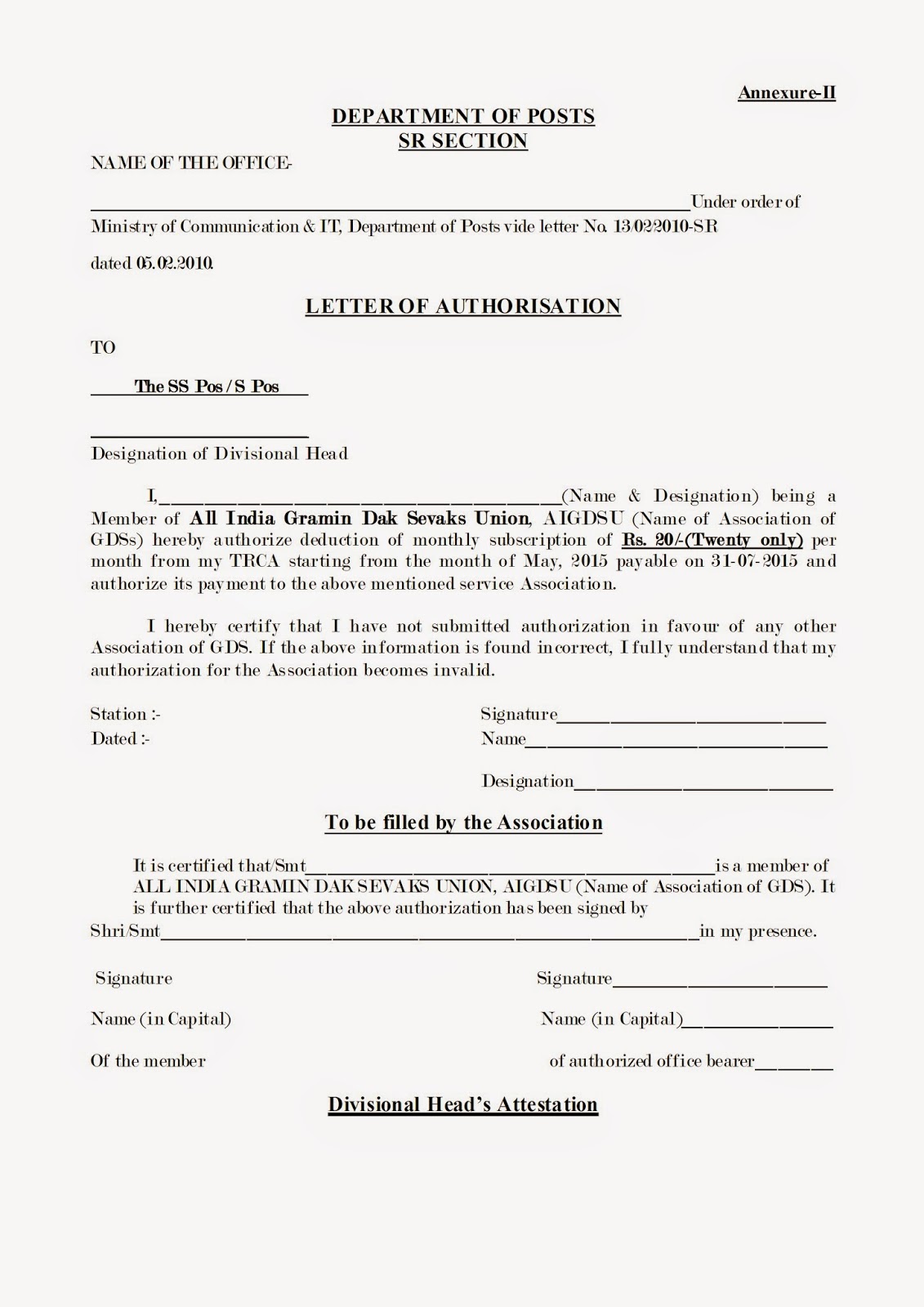 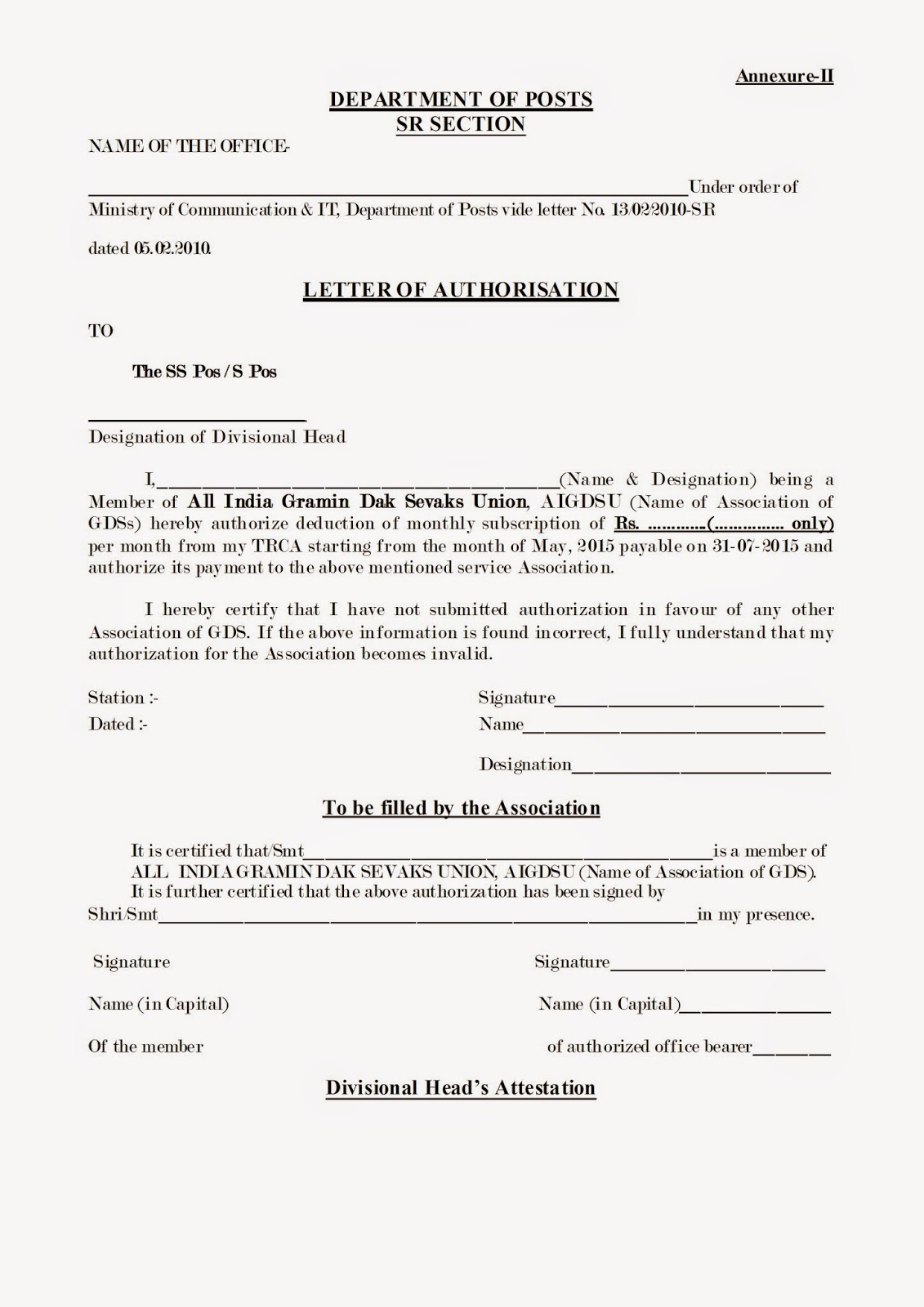 Posted by RURAL POSTAL EMPLOYEES at 11:51 AM

Now this year before 30th April for new members old declaration form can be used this year and our strike issues department referred finance ministry.

All are requested kindly to clear all Quota and Dues to CHQ early. Take it seriously.


Comrades, you are aware that declarations from such friends who have not become members of our union are to be submitted to the DDO/SPOs/SSPOs/SRMOs (Post Master concerned) by 30th of April. You are requested that such declarations are collected from the staff and submitted positively by 30.4.2015 to the concerned favors of AIGDSU.