WISH YOU A VERY HAPPY NEW YEAR TO ALL OUR MEMBERS, READERS, WELL WISHERS AND PATRONS. 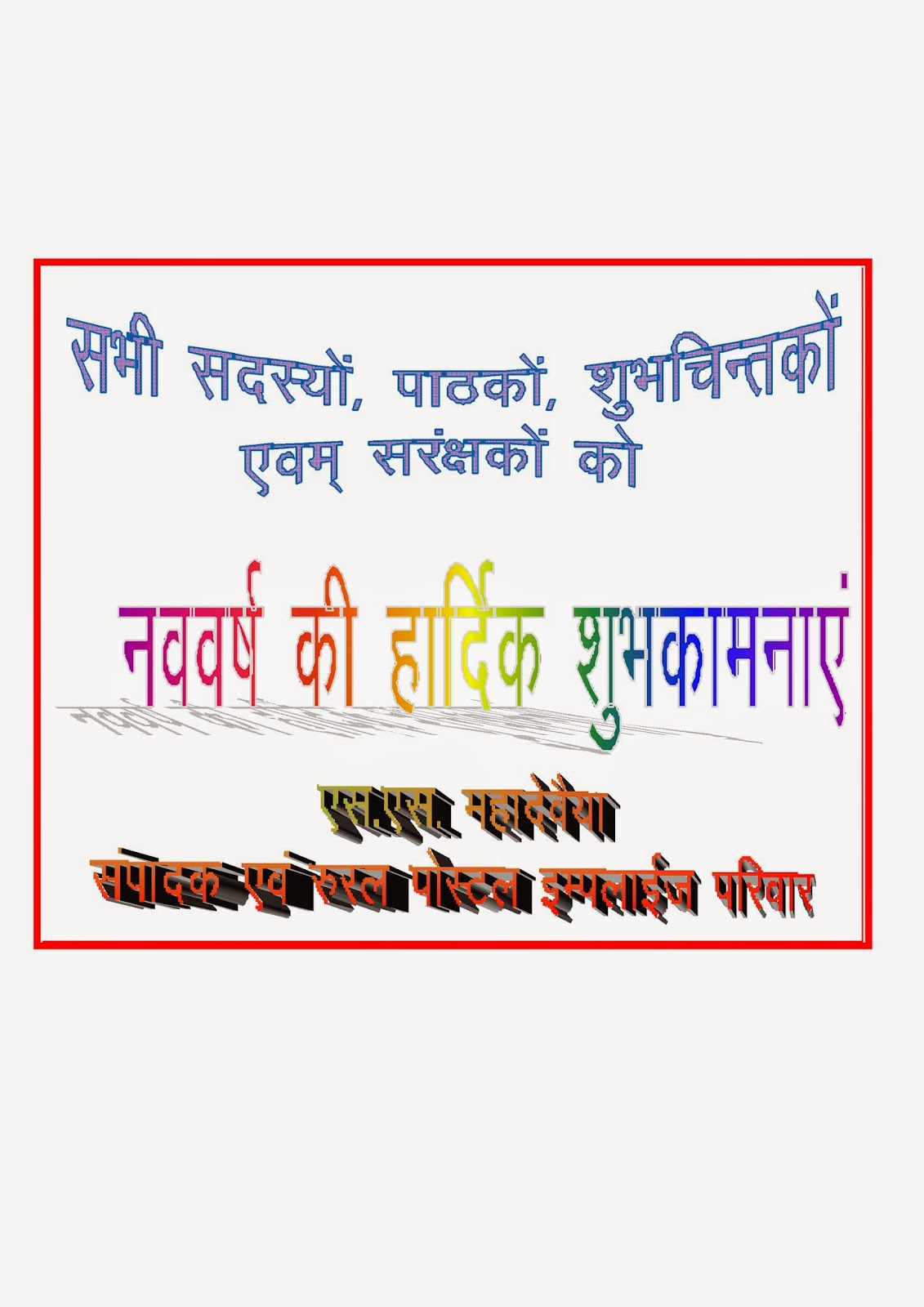 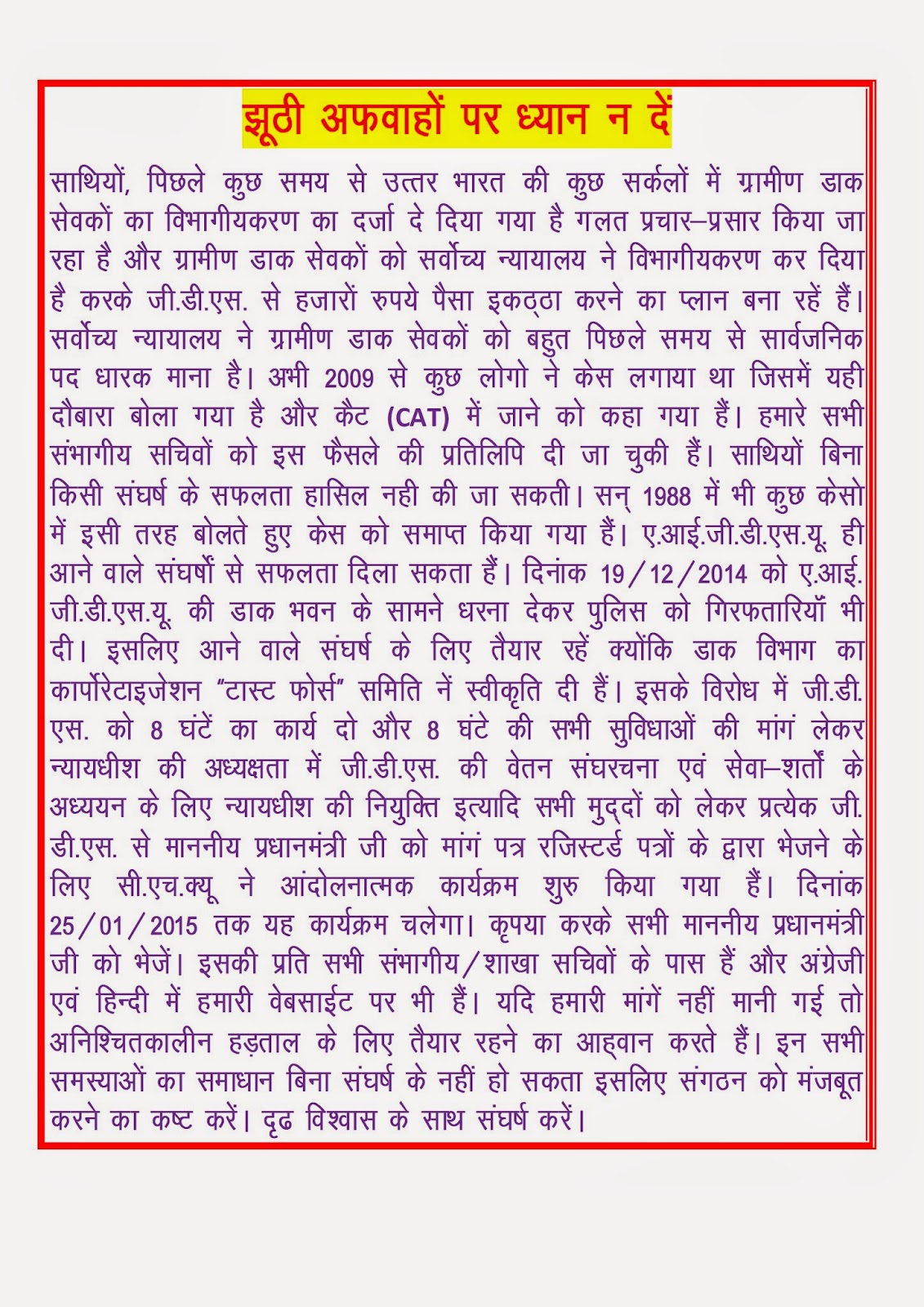 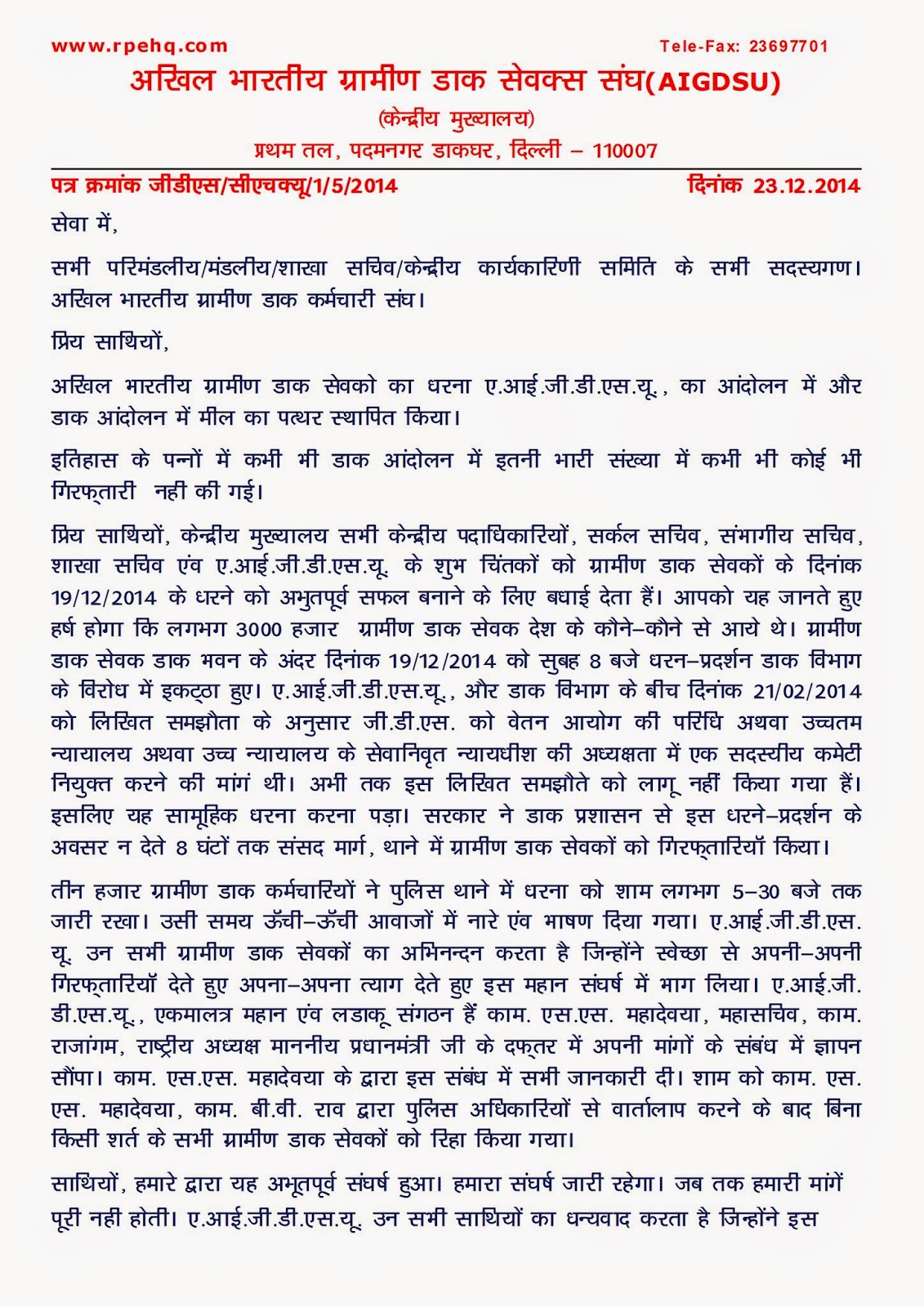 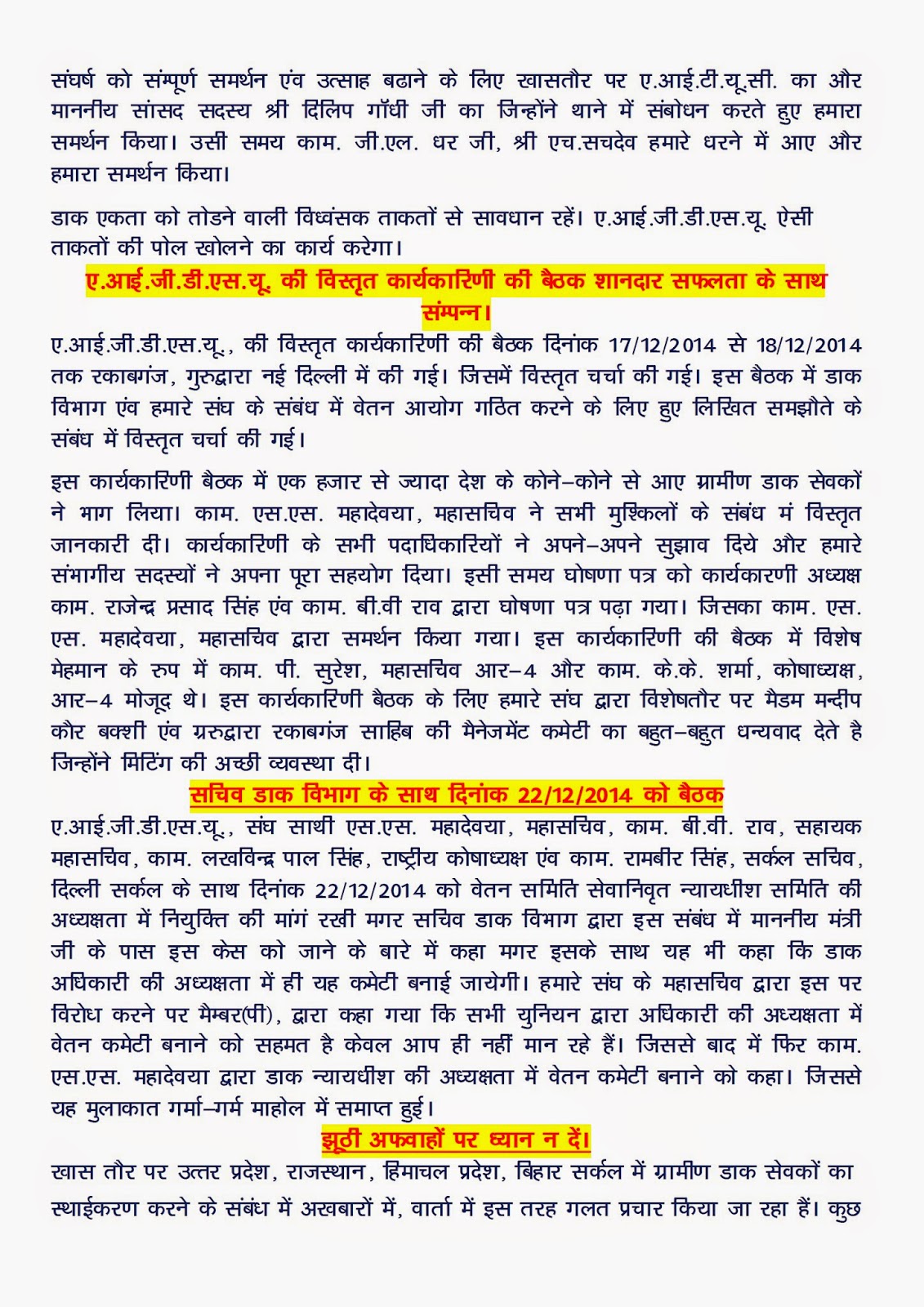 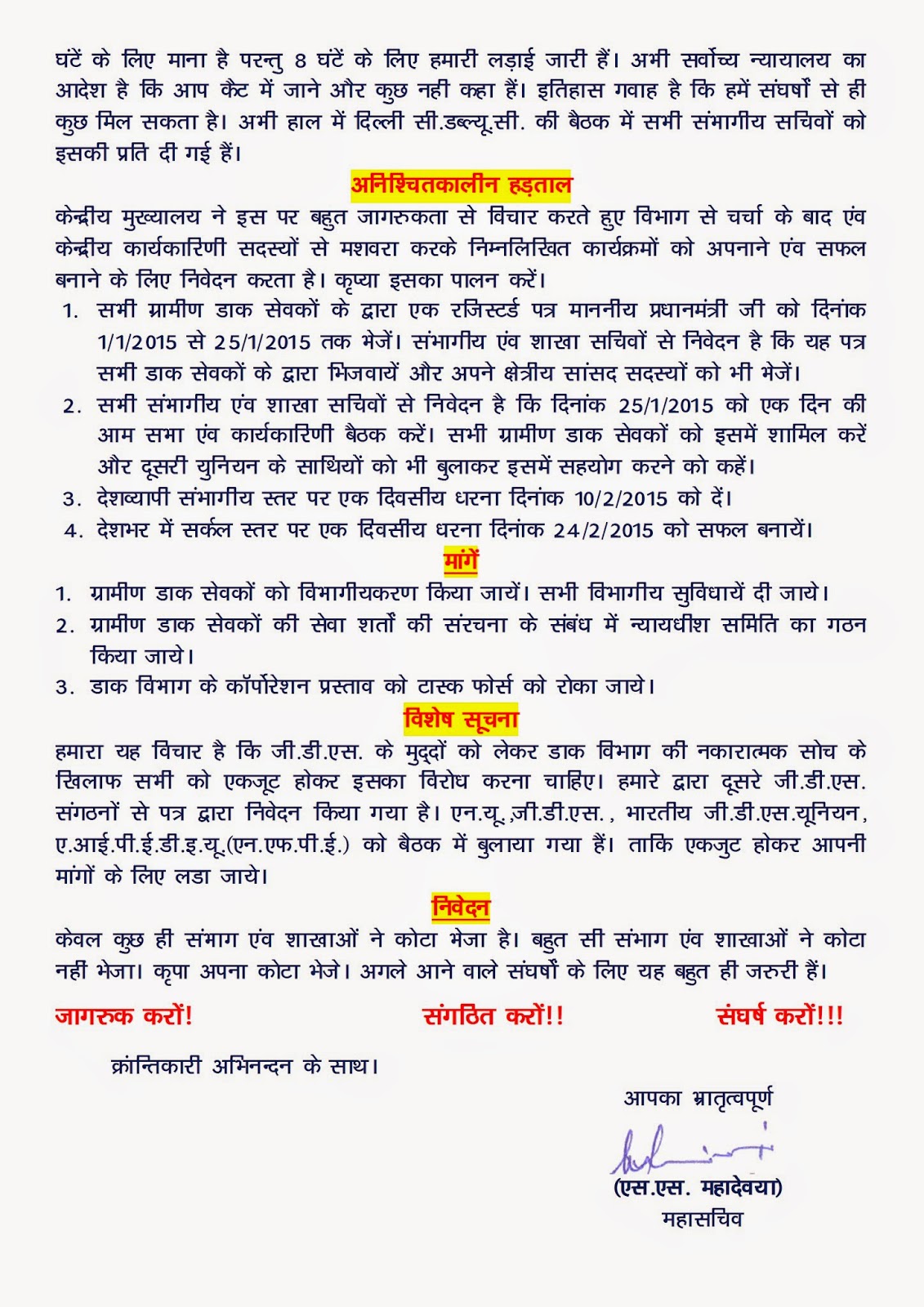 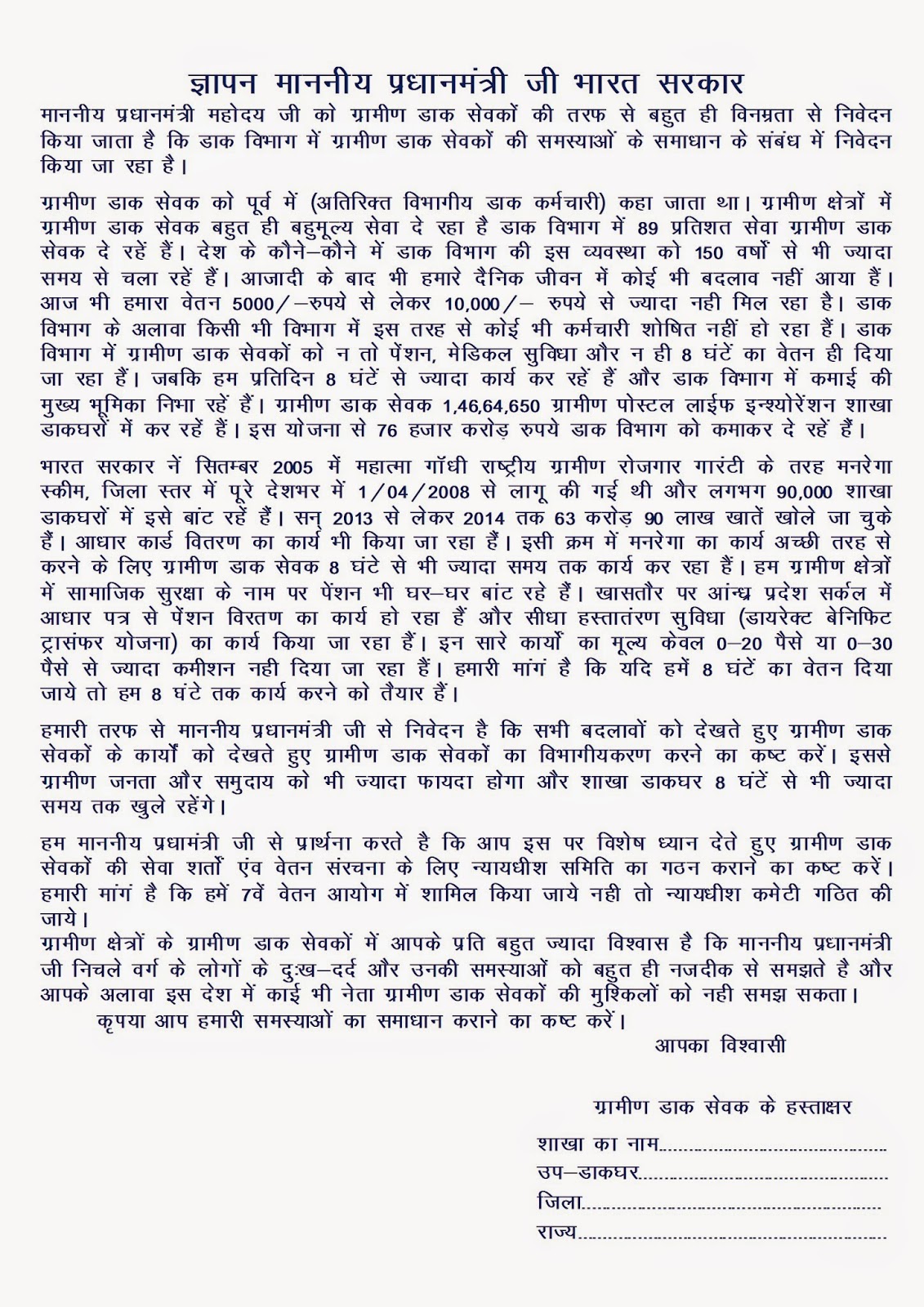 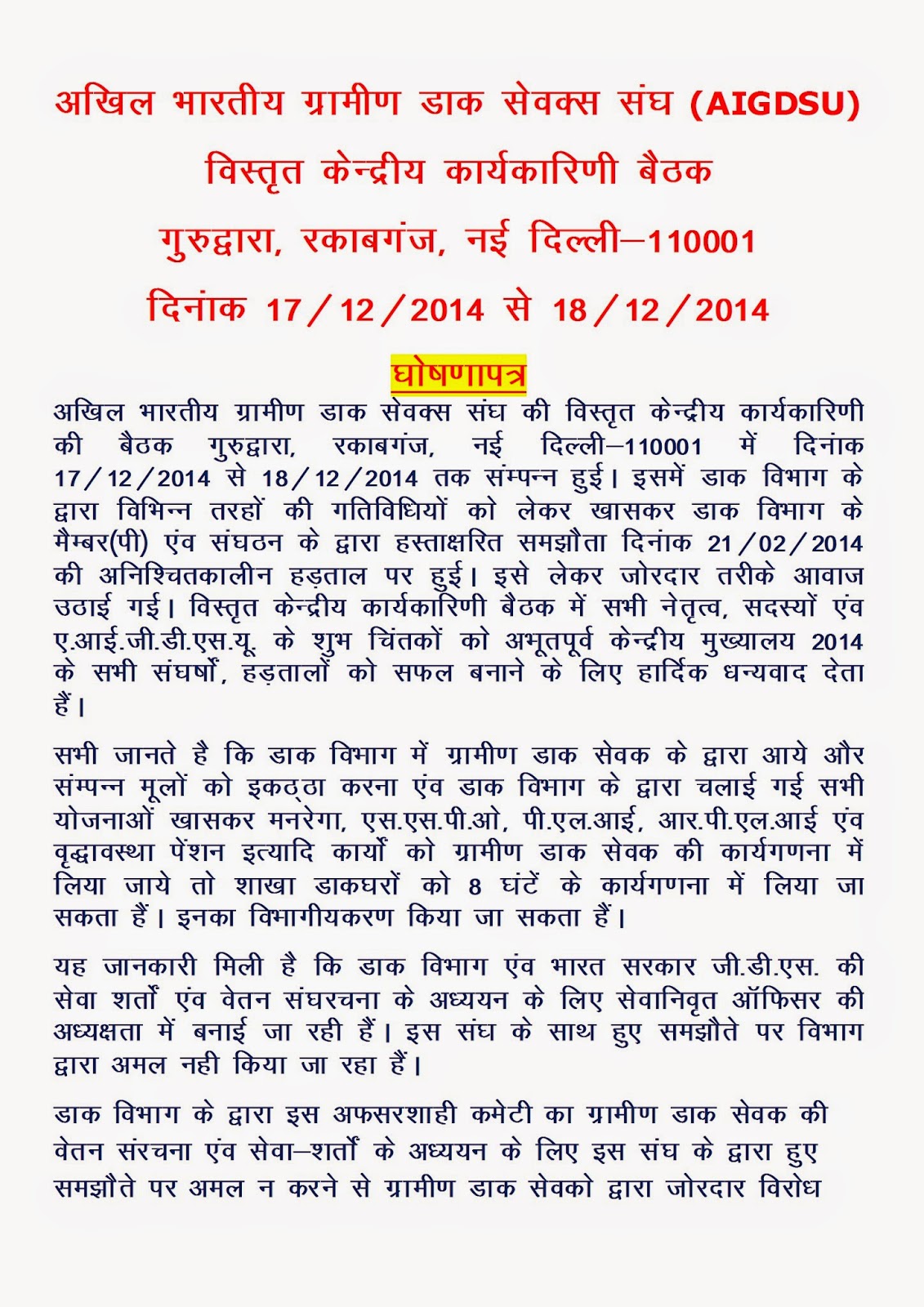 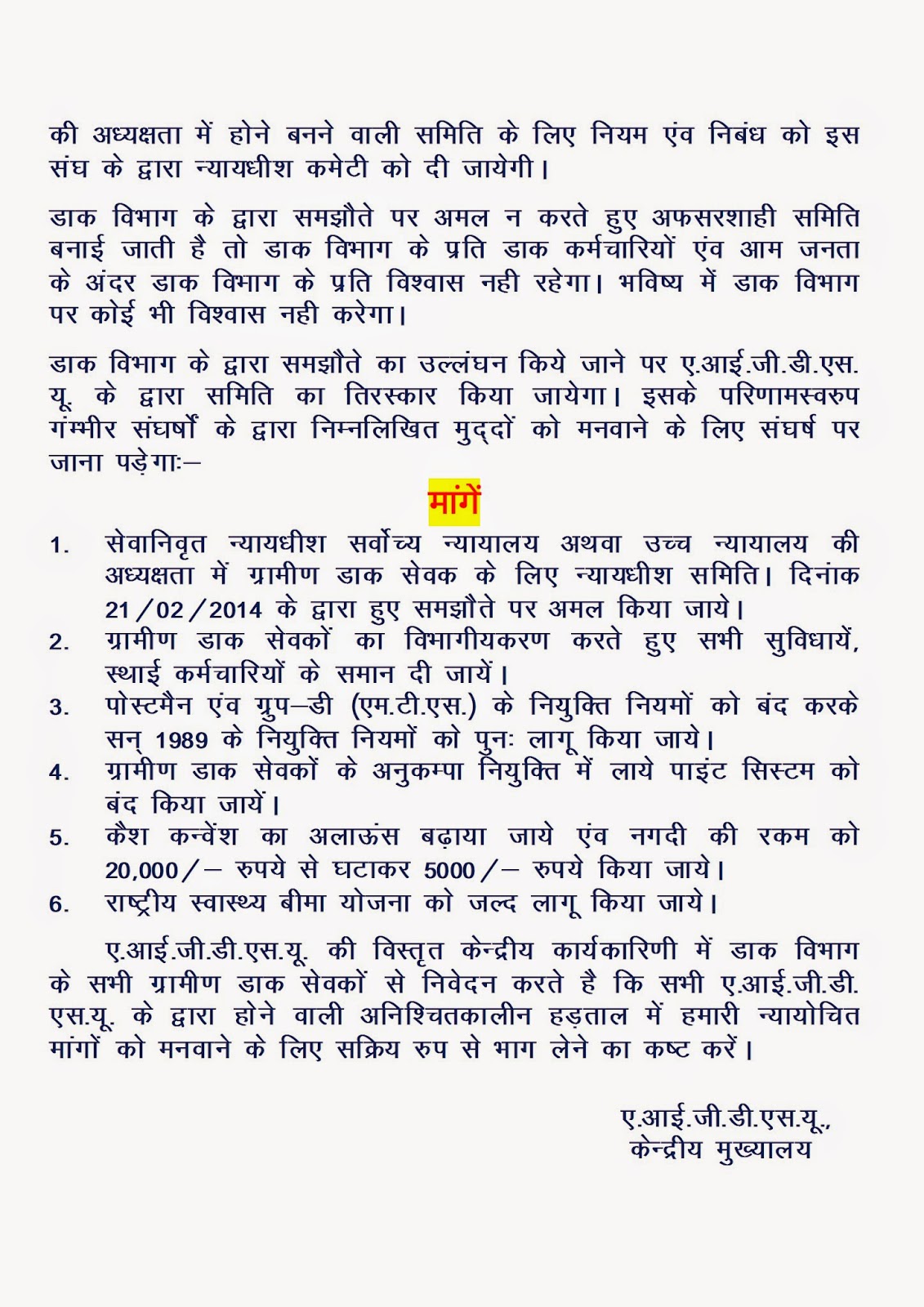 NEVER BEFORE IN THE HISTORY OF POSTAL TRADE UNION MOVEMENT SUCH A LARGE NUMBER OF ARRESTS WERE MADE.

You will be pleased to know that nearly three thousand Gramin Dak Sevaks from different parts of the country assembled in Dak Bhavan early morning at 8:00 A.M. on 19.12.2014 to stage dharna to protest against Department of Posts unwillingness to implement the written agreement between Department of Posts and All India Gramin Dak Sevaks Union dated 21.2.2014 to the effect that a Pay Committee headed by a judge of Supreme Court/High Court will be appointed to determine the pay structure & service conditions of the Gramin Dak Sevaks. This has not been implemented till date. We were therefore compelled to launch Massive Dharna. The Government instead of allowing GDS to stage a peaceful dharna, arrested them and detained them till late evening.

Three thousand GDS employees continued Dharna while in custody with slogans up to 5:00 P.M. in the police station. AIGDSU congratulates thousands of Gramin Dak Sevaks who willingly courted arrest for their sacrifice and heroic act. This act glorified AIGDSU as the real fighter for the cause of Gramin Dak Sevaks. Com. S.S. Mahadevaiah, General Secretary and Com. Rajangam, President met senior officers of the Prime Minister office and submitted the memorandum.  Com. S.S. Mahadevaiah explained the happenings in detail. Com. S.S. Mahadevaiah, General Secretary and Com. B.V. Rao, Asst. General Secretary negotiated with SP in the evening. All the three thousand GDS employees released unconditionally late in the evening.

We have fought a glorious struggle. We shall continue our struggle till our demands are met. AIGDSU acknowledges with gratitude the support & solidarity we got from AITUC and the Hon’ble Member of Parliament Sri. Dilipji Gandhi.

More than three thousand GDS comrades from different parts of the country attended the enlarged CWC. Com. S.S. Mahadevaiah, General Secretary explained the present situation and the attitude of the department of posts towards the pay committee. All the CWC members, circle secretaries, divisional and branch secretaries discussed the items of Agenda and suggested the CHQ for trade union action to realize the justified demands of GDS. The declaration of the enlarged CWC proposed by Com. B.V. Rao, Astt. General Secretary and seconded by Com. S.S. Mahadevaiah, General Secretary was unanimously accepted by the August house. AIGDSU acknowledged with gratitude the support and solidarity from P. Suresh, General Secretary, R-IV and Com. K.K. Sharma, Vice President, NFPE.
Meeting with Secretary on 22-12-2014
A delegation of AIGDSU consisting Com. S.S. Mahadevaiah, General Secretary, Com. B.V. Rao, Asst. General Secretary, Com. Lakhwinder Pal Singh, Treasurer and Com. Rambir Singh, Circle Secretary, Delhi Circle met Secretary on 22-12-2014 to demand for the appointment of Judiciary committee. Secretary, Department of Posts said that the Department has taken the decision to appoint officer committee and file was sent to the minister for formal approval. She added that except AIGDSU all are accepted for officers committee. The General Secretary opposed the decision of the Department of Posts and demanded to honour the agreement. The meeting ended with hot atmosphere.
Indefinite strike
CHQ carefully discussed the decision of the Department with available CHQ office bearers and decided to go on Indefinite strike. Before Indefinite strike. The following programme of action should be observed.

1.   All the GDS should send memorandum to the Prime Minister by registered post from 1st January to 25th January, 2015. All Divisional and Branch Secretaries are requested to send the memorandum to the Prime Minister and Communication Minister though local M.P.
2.   All the Divisions and Branches are requested to hold either Divisional Working Committee meetings or General Body meetings on 25-01-2015 to motivate GDS comrades. Invite the divisional leaders of different unions and request for their solidarity and support.
3.   Country wide One day Dharna at Divisional Level on 10-2-2015.
4.   Countrywide One day Dharna at Circle level on 24-2-2015.
DEMANDS
1.       Regularize GDS employees and grant all benefits at par with Department employees.
2.       Appoint Judiciary committee to examine wage structure and service conditions of GDS.
3.       Stop corporatization of postal department based on the report of Task Force committee.
IMPORTANT NOTE
We would like to go on GDS united trade union action against the attitude of the Department of Posts. We are consulting the sister GDS unions for united trade union action. We have return letters to The General Secretary, NUGDS, The General Secretary, Bhartiya GDS Union and The General Secretary, AIPEU-GDS (NFPE) to discuss and finalize the dates of Indefinite strike. After heaving their consent we will announce the date of Indefinite strike.
APPEAL
Only few Divisional and branch secretaries are remitted quota to CHQ. All are requested to remit quota to CHQ immediately to meet the expenses of future struggles

Most Respectfully We, Gramin Dak Sevaks, working in the Department of posts are submitting memorandum for your kind perusal and favourable action.

Gramin Dak Sevaks (Perviously called Extra Departmental Agents) are rendering valuable services to the rural India working in the nook and corner of the country for last hundred and fifty years with low wages Rs. 5000 to 10000 per month. Gramin Dak Sevaks are unique in the Postal Department. They are denied to grant pension, Medical facilities and 8 hour pay though they are working more than 8 hours in practical.

Government of India enacted Mahatma Gandhi National Rural employment Guarentee Act (MGNREGA) in September 2005. The scheme came into effect in all districts in the country from 1st April 2008. The scheme is operational through 96, 375 Branch Post offices. During the period from April 2013 to February 2014, 63 crores 90 lakhs MGNREGA accounts were opened and an amount of ten thousand four hundred crores was disbursed.

In order to ensure quality of service under MGNREGA, Gramin Dak Sevaks are working 8 to 10 hours per day. Various social security pension schemes are also operational through Branch Post offices in rural India. Branch Post offices in Andhra Pradesh Circle are doing Adhaar Enabled Payment of wages/benefits under MGNREGA and other social security schemes with the support of M/S A.P. online. 9000 Micro ATMs have been deployed by the circle for doing the DBT (Direct benefit transfer) payment to the wage workers. Gramin Dak Sevaks have to attend more than 8 hours per day to these additional work besides normal Branch Post office work. They have to pay only 0-50 paise as incentive per account by the Department of Posts.

We are requesting the Hon’ble Prime Minister keeping all the points in view, to take necessary steps to regularize Gramin Dak Sevaks and provide 8 hours work to serve the Rural People. We are ready to work 8 hours duty to implement various schemes under IT project going to be introduced by the Government of India for the welfare of rural people to lessen the poverty among the common man.

The Gramin Dak Sevaks are having high hopes and expectations on the honourable Prime Minister who knows very well than any other leader in India the difficulties of down trodden to consider the justified demands of Gramin Dak Sevaks.

We are consulting the sister GDS unions for united trade union action.

A delegation of AIGDSU consisting Com. S.S. Mahadevaiah, General Secretary, Com. B.V. Rao, Asst. General Secretary, Com. Lakhwinder Pal Singh, CHQ Treasurer, Com. Rambir Singh, Circle Secretary Delhi Circle met Secretary Department of Posts on 22.12.2014 to discuss about GDS Pay Committee. The Secretary informed that the Department has taken firm decision to appoint officer committee and file was sent to the Minister of Communication & IT for approval. We were also informed that the Government of India vehemently denied to include GDS in 7th CPC. Judiciary committee also will not be appointed for GDS she added. The delegation seriously objected the decision of the department and insisted for Judiciary committee.


This union would like to discuss the GDS sister unions about the attitude of the Government and the Department. We felt that a serious and effective united trade union action of GDS is the need of the hour as early as possible to cause GDS fraternity.


Wish you a very Merry Christmas to you and your family
Posted by RURAL POSTAL EMPLOYEES at 9:44 PM

All India Gramin Dak Sevaks Union on behalf of two lakh sixty thousand Gramin Dak Sevaks in the Department of Posts most respectfully submit the memorandum on pressing and urgent problems of Gramin Dak Sevaks, working in the nook and corner of the country to extend valuable services to the rural people by implementing the various schemes such as MGNREGS, SSPO, PLI, RPLI etc. introduced by the Govt. of India efficiently and honestly for the welfare of ordinary people.

The Gramin Dak Sevaks the main source to the Department of Posts to generate revenue through small saving scheme and Rural Postal Life Insurance.

Unfortunately these low paid employees are being neglected after independence to grant minimum wages and facilities. They are denied to grant minimum pension at par with the pension granted to the people in old age by state Government. After rendering forty years service to the department of posts, they have to spend miserable life after retirement as the Department of posts denied to grant Pension to Gramin Dak Sevaks.

Hence this union is humbly requesting the kind intervention of hon’ble Prime Minister  and cause suitable and necessary instructions to the Department of posts for the appointment of judiciary committee.

This union is herewith submitting the signatures of the GDS employees of 500 districts from 28 states praying the intervention of Hon’ble Prime Minister.