CHQ Letter to Govt. on Recruitment Rules for the post of Multi Tasking Staff and Postman/Mailguard.


Sub:-        Recruitment Rules for the post of Multi Tasking Staff.


As per these Amended recruitment rules 25% of the vacancies of multi tasking staff has to be filled by casual labourers/part time casual labourers.
In this connection we have emphatically to mention as below.


As per the Amended recruitment rules clause (iv) 25% vacancies are proposed to be filled by open market. This insult to the injury.


We therefore emphatically suggests that item II(i) II (ii) and II (iii) of the Recruitment rules to the post of Multi tasking staff in subordinate offices should be amended as.


(ii)      30% from GDS employees on the basis of limited competitive examination.


We further suggest that the recruitment rules for Multi tasking staff of circle and Administrative offices should be amended to provide 50% posts for the GDS employees.


We sincerely hope that our suggestions would be positively and dispassionately considered and accegoted.


You are requested to kindly consider the amendment.


Yours faithfully,
Posted by RURAL POSTAL EMPLOYEES at 7:31 PM

The Call of the Confederation of CG Employees and Workers, Four to five  thousands of Central Government Employees belonging to all affiliates of Confederation reached Delhi and demonstrated before the Parliament on 26th July 2012.

The March to Parliament is organised to demand of Constitution of 7th Central Pay Commission to revise the wages from 1.1.2011; Merger of 50% DA with Basic Pay; 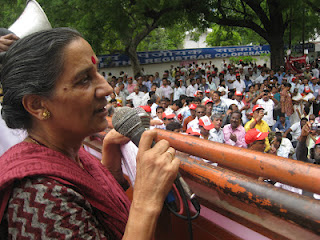 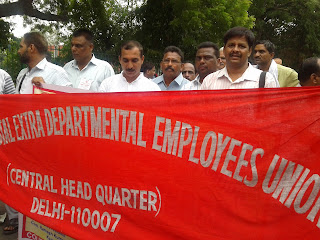 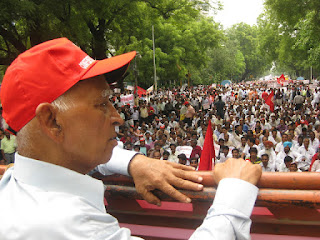 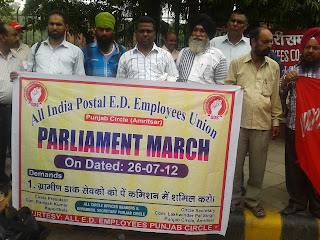 
The Govt. of India have recognized the set of office bearers elected by the 7th Conference of AIPEDEU at Amravathi, Maharastra on 6-8.April, 2012 rejecting false claims made by few disrupters led by Com. P. Pandurangarao and supported by Postal Federation leaders.


Congratulations to all the members of our union, well wishers & supporters who all stood united like rock behind our union. This victory is the result of our unity. Despite serious attempt to split our union by leaders of the NFPE, at Mozri, Amaravathi, Maharashtra at the time of Conference of office bearers elected have been recognized by the Govt. finally truth has prevailed and falsehood has been defeated.


As stated in our earlier circular dated 10.5.2012, the main message of the Amravathi conference was unity of the AIPEDEU must be preserved at all costs and it should remain our supreme task in coming days. The forces which tried to disrupt AIPEDEU at Amravathi are using all foul methods including intimidation, blackmail and force to compel our members to resign from our union, particularly in West Bengal and Kerala. All sorts of pressures are being put on them. But till date they have failed to make any dent.


The AIPEDEU appeals to all Gramin Dak Sevaks (GDS) irrespective of their political and other views to continue their membership of AIPEDEU and not to resign from this union. Those who have resigned under duress are requested to re-enroll themselves in AIPEDEU. They will be most honoured members of the union.


The new union which these betrayers and socalled leaders have formed is a hoax. There was no walk out by delegates at Amravathi. No separate conference was held there. The letter dated 16.4.2012 sent by Com. Panduranga Rao appears to be after thought. It is to serve the interests of the management & weaken the unity of more than 2.5 lakh GDS in the country who are determined to fight for their rights.


Since issue of recognition is settled the central working committee and All India Convention is scheduled to be held in Delhi on 23rd August 2012 and 24 the August 2012 respectively.

All Circle, Divisional, Branch Secretaries are requested to make arrangements to and pro reservations etc. to attend All India Convention held in Delhi.

All Circles nearby Delhi mobilize large number of comrades to participate in the convention and make it success. Three important office bearers president, secretary and treasurer of the Division/Branch should attend the convention without fail.

Our Divisional/Branch secretaries are requested to approach P-III and PIV secretaries of your division and ask them not to disturb the GDS movement and AIPEDEU which is the only recognized union among the GDS. However be coutions and alert about the disruptors.


Thousands of GDS and other postal workers should be mobilized and educated about the demands and about the diabolical attack of Postal federation leaders on AIPEDEU. The disrupters should be completely exposed, their nefarious game and consistent betrayal of GDS should be explained to workers. We should also educate our workers about the future tasks which we have decided at Amravathi. According to Govt. statistics, 92% of the post offices in the country are run by GDS. The GDS are therefore real postal workers. The postal service belongs to them. They should therefore get fair deal from Govt. for running postal services.


We should be treated as part and parcel of Postal services.


POSTMEN/MAIL GUARD AND MTS RECRUITMENT RULES ISUED: The avenues of promotion for the GDS staff are very little. They are appointed as group ‘D’ and postmen on promotion. While, regarding recruitment as group ‘D’ (now multi functional group ‘C’) there is not much clarity and have been made to go against the interests of GDS staff as our quota has been curtailed. Postmen/Mali Guard on promotion 50% revised from 25% to 50% bout this also not much clarity.  A very glaring discrimination is that while everyone not only in our department but also in other departments is enjoying three automatic promotions, there is none for the GDS employees. All these are glaring examples of crude discrimination. We shall have to find a way out of this. We are looking forward to your suggestion.


We take this opportunity to extend our hearty congratulations to all leaders, activists and members of this union for having successfully observed. The Central Committee of the All India Postal Extra Departmental Employees Union (A.IP.E.D.E.U.) in its meeting held at Mojri Amravati April, 2012 finalized a three phase programme to highlight and press for solution its burning problems programmes of action in support of our demands - If the Demands will not be settled on or before July 10th, further course of action including direct Trade Union action will be decided in the National Convention held at Delhi on 24 August, 2012.


ALL INDIA CONVENTION OF AIPEDEU

1.           Regularise GDS as Government employees.
2.           Grant Bonus ceiling of Rs. 3500/- to GDS at par with Departmental employees.
3.           Implement recommendations of Group of Officers Committee was headed by V.P. Singh DDG (Esst.)-Regarding TRCA Protection etc.
4.           Implement Rastriya Swastya Bhima Yojana (Medical Scheme) to GDS immediately.
5.           Grant Compassionate appointments for all,
6.           Grant ACP promotion (10/20/30 years) or financial upgradation to GDS.
7.           Stop abolition of GDS posts and filling up of all vacant posts.
8.           Grant All Allowances, advances and other benefits at par with departmental employees
Remittance of Quota and Dues:
Comrades, the position of receipt of quota by the CHQ is again very disheartening. The Divisional/Branch union get their subscription every month from the DDO’s but the remittance of quota to CHQ is rather very casual. The Divisional Presidents and Secretaries will please ensure timely remittance of quota.

The AIPEDEU will fight much more militantly in future to win long pending demands. 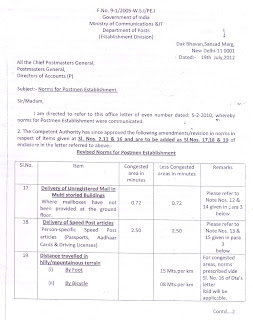 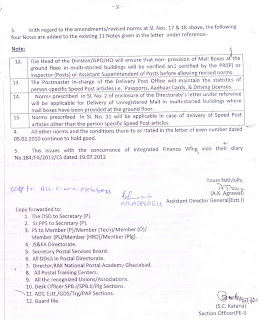 CHQ obtained the figures under RTI Act from Kerala Circle the following detailes is given for information.

Congratulations to Kerala Leaders and comrades to extend support to AIPEDEU
Posted by RURAL POSTAL EMPLOYEES at 12:58 PM