We have to play key role and launch struggles for the cause of GDS main demands (i) Inclusion of GDS employees in 7th Central Pay Commission. (ii) Regularisation of GDS employees. CHQ is going to conduct March to Parliament on 12-12-2013 and GDS National Convention at Agrawal Dharmshala, Near Model Town-II metro station Delhi-110009 on 13-12-2013. Future course of action will be decided there after due consultation of rank and file. CHQ appeals all our Branch/Divisional/Circles Secretaries to mobilize large number to attend the CHQ programmes. Suggest our comrades to make to and fro reservations as early as possible. The climate in Delhi in month of December is very cold. Come with necessary and proper arrangements to face cool climate.

As the previous office bearers have resigned and in month of September ad-hoc committee formed. Now in this conference unanimously elected office bearers for AIPEDEU, Kerala Circle under the direct supervision of S.S.Mahadevaiah, General Secretary. In this conference Sri. PJ Thomas, K.D.Nithin and Bena Andrews were elected as president, circle secretary and treasurer respectively. 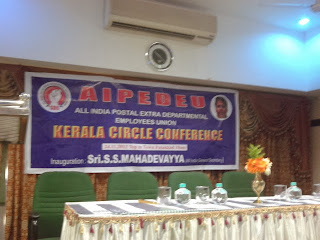 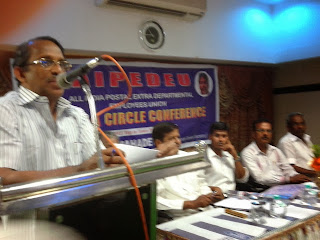 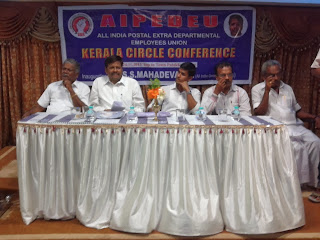 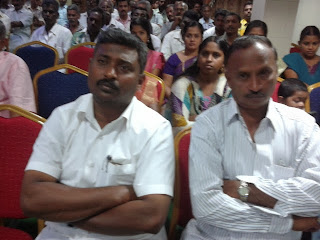 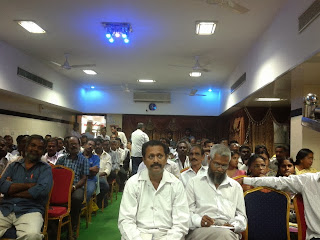 Posted by RURAL POSTAL EMPLOYEES at 10:17 AM


All roads leads to New Delhi


Reports have been received to CHQ from all over the country about thundering and resounding success of 12th - -11-2013 at divisional head quarters. CHQ congratulates all divisional and branch secretaries and members for the success of CHQ programme.

With all spirits our CHQ is on the move to resolve the important and unsettled demands. It is right times to revise the wages of Gramin Dak Sevaks with effect from 1-1-2011 and every five years thereafter by setting up the 7th CPC. Merge DA with pay for all purposes with effect from 1-1-2011. Is another important demands that have to achieved previously this demand was diluted by Government of India as well as so called leadership of Federation.


We have to fight for the removal of restriction imposed on compassionate appointment, withdrawal of open market recruitment of Postman and MTS Cadres. Time Bond promotion to GDS and Departmentalisation of all Gramin Dak  Sevaks to be resolved.

After the successful serious of struggles programmes of AIPEDEU only GDS got victory on bonus ceiling. RSBY Data collection from GDS and process of recording his under way. However our union is demanding that medical care facilities scheme should be implemented at par with regular departmental employees.

While AIPEDEU was on serious struggle including indefinite strike, all the federation and the GDS Unions were kept in silent and supported the bureaucrats.


Now AIPEDEU is again ready to launch another struggle for the cause of Gramin Dak Sevaks, the so called federations and the GDS Unions started show game such as parliament march. Unmaterialised Indefinite strike etc., to track the GDS, we applealed all the GDS fraternity to observe the facts and analise the struggles. Decides who are the real fighters? And who are the show masters?


The modification suggested in SDBS scheme by over CHQ is consider positively by the department of post. There is further improvement in SDBS, which gets benefits to GDS is going to be implemented soon.


Rally around the AIPEDEU participate massively on parliament march on 12th 2013 and National GDS convention  on 13-12-2013. Participate, discuss, and decide the programme of action. Let us move towards New Delhi.
Posted by RURAL POSTAL EMPLOYEES at 6:26 PM


MINISTRY OF COMMUNICATIONS AND I.T.

ALL HEADS OF CIRCULES,


ALL HEADS OF POSTAL ACCOUNTS OFFICES,

Kindly refer to Directorate’s OM No. 6-11/2009-PE-II dated 1.4.2011 on the above noted subject under which the notification for introducing Service Discharge Benefit Scheme (SDBS) for GDS was forwarded for implementation. This Scheme came into effect from 1st April, 2011 with the conditions mentioned in the notification. As per the regulations of this Scheme, the Department of Posts makes a subscription of Rs. 200/- per month for each GDS enrolled under this Scheme. For the GDS engaged prior to introduction of the Scheme, this scheme was optional and those who were interested in joining the scheme had to give option (willingness) to come under the scheme. About 70% GDS opted for the scheme while the remaining did not. The GDS were not required to make any contribution from their side under the Scheme.

The service Federations/Unions have raised the matter with this office for:-


(ii)          To allow the GDS beneficiaries to also make personal subscription/contribution towards this scheme in addition to the contribution being made by the Department.

2.       These two proposals mentioned above have been examined in the Department in consultation with the Pension Fund Regulatory & Development Authority (PFRDA), the nodal department for this Scheme as well as CRA (Central Recordkeeping Agency) of NSDL (National Securities Depository Ltd.), and the following decision have been taken:-

(i)     “To extend one extra option to the existing Gramin Dak Sevaks to come under the ambit of the Scheme”:

It has been decided to extend one more and last option to the existing GDS to exercise their option for their enrollment under the Scheme in relaxation of the SDBS Regulations (Provisional) 2011. The GDS must enroll himself before 31st January, 2014. The GDS so enrolled now as a result of this option shall be treated to have come under the Scheme from the month of their enrollment. Government’s subscription on their behalf shall commence to be deposited from that month.

The GDS having less than 3 years period of engagement as on 1.1.2014 shall not been eligible to exercise this option.

The Head of the Unit concerned should have the prescribed enrolment application forms filled up by the GDS opting for the Scheme and shall forward the same for their enrollment to the Central Record Keeping Agency, NSDL as per the existing channel and procedure. In such cases, (where the GDS is opting now for this Scheme), he shall be eligible to the accrued severance amount calculated up to the month immediately preceding the month of his enrolment.

(ii)          “To allow the GDS beneficiaries also to subscribe/contribute towards the Scheme”:

In respect of the GDS enrolled under this Scheme after the month of October, 2013 their contribution shall commence from the month of their enrollment along with the Government contribution.

These instructions may immediately be circulated to all concerned for immediate necessary action. 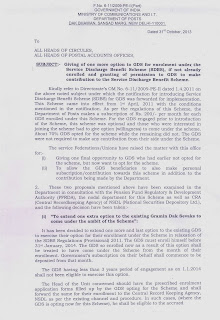 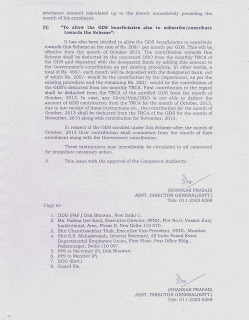