In the informal meeting it was informed that the issue of BONUS department submitted file to Finance with due recommendation.  Further indicated that it should have clearance at DOP&T and Nodal ministry.

As regards committee on TRCA protection and Cash handling points, the Chairman is out of India and so the report is likely to be submitted in April,2012.

Ministry of Communications & IT

A reference is invited to this Directorate letters of even number dated 14 Dec 2010 and 01 Aug 2011 vide which the scheme for engagement of GDS on compassionate grounds with merit points & procedure for selection as modified was circulated and made effective for all the compassionate engagement cases to be considered on or after 01.01.2011.

2.         The Scheme has recently been reviewed in this Directorate and in partial modification to the existing provisions of the Scheme, the following provisions are hereby ordered to be substituted with the approval of the competent authority:-

(b)   The attribute of assessing indigence appearing at Ser 2 – 'Outstanding liabilities for Education/Marriage of dependent children' on Page 2 of this Directorate letter No. 17-17/2010-GDS dated 14.12.2000 is substituted as under:-

(c)   The attribute of assessing indigence appearing at Ser 6 – 'Discharge Benefits i.e. Ex-gratia gratuity. Severance Amount. Service Discharge benefits under NPS Lite and Group Insurance Benefits received by family' on Page 3 of this Directorate letter No. 17-17/2010-GDS dated 14.12.2010 is substituted as under:-

(e)   Apart from the above, cases where the wife of the deceased GDS has applied for compassionate engagement for her; she shall get 15 additional points as grace points. This is in line with the general principle that the widow needs to be given preference for compassionate engagement. Such grace points shall not be permissible to the widower applicant.

3.         All other provisions contained in the Scheme dated 14.12.2010 as further modified under letter of even number dated 01.08.2011 shall continue to apply as already prescribed and all compassionate engagement shall be approved within the ambit of the prescribed Scheme only. It is reiterated that the existing criteria of 50 Points and above for adjudging 'hard and deserving cases' stands.

4.         The above changes shall take effect from the date of application of the original Scheme. All cases which were considered & rejected by the CRC based on the earlier provisions of the new Scheme. May be reconsidered afresh based on application of the revised criteria within the time frame allowed under Pare 7(e) of this Directorate letter No. 17-17/2010-GDS dated 14.12.2010 as fresh cases subject to availability of vacancies in the division concerned in view of removal of ceiling of 10% already without further reference to this Directorate.

5.         Pursuant to the provisions now revised, where the widow now applies for the compassionate engagement following rejection of the case of one of her child; her case may also be taken as a fresh case to be considered as per the new scheme as modified. Thus, before the already rejected cases are reconsidered, the widow may be given an option to be exercised in writing within one month of date of receipt of the communication to be issued by the Circle treating the application of her child as withdrawn & consideration of her application afresh to follow in due course. Where such an options exercised, the already rejected application of her child may not be reconsidered and her fresh application may be got processed expeditiously.

THE DEARNESS ALLOWANCE AND DEARNESS RELIEF FOR CENTRAL GOVERNMENT SERVING EMPLOYEES AND PENSIONERS WILL INCREASE FROM 58% PER CENT OF BASIC EMOLUMENTS TO 65% PER CENT WITH EFFECT FROM 1.1.2012

Posted by RURAL POSTAL EMPLOYEES at 8:42 AM 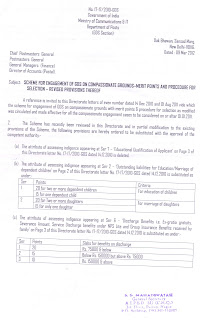 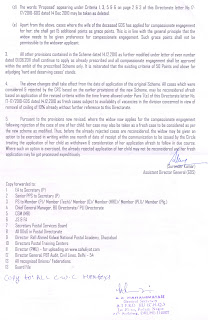 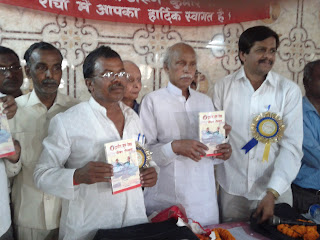 
It is a matter of pleasure that On the nice occasion of CIRCLE CONFERENCE OF JHARKHND CIRCLE at RANCHI ON 11.03.2012 THE HINDI BOOK IS RELEASED. Updated information GDS rulings/welfare available for your daily references.

We believe that it would be useful in the routine to address many issues/problems.

The Hindi/English books is sold for Rs.100/-+ Postage on no cost and no profit basis. Please buy and encouage all to have one.

Chennai, Mar 9, 2012(TNN): After waiting for 30 years, close to 150 employees of the postal department will finally become regular employees, thanks to the intervention of the Central Administrative Tribunal ( CAT). A bench of G Shanthappa, judicial member and R Satapathy, administrative member, passed orders on the matter.

The applicants were appointed mazdoors with the department of posts in 1982. While joining, they were assured that their services would be regularised. Based on directions in a Supreme Court judgment, the department introduced a scheme in 1991 which stipulated that all casual labourers who worked for eight hours a day for 240 days every year as on November 29, 1989 would be conferred temporary status.

Those who were granted temporary status and had worked for three consecutive years would be conferred with 'Group D' status. These employees – who are now called multi-tasking staff – would be eligible for pension and other service benefits.

When they approached the tribunal in 2010, they were directed to make individual representations to authorities by listing out their grievances. But their claims were rejected mainly on two grounds – that they were overage and that they did not have the qualification.

When their fresh applications came up for hearing, M Ravindran, additional solicitor general who appeared for the Union government, said authorities did not have any objection to regularise their services.

The bench said there "cannot be any hindrance for the absorption of applicants" who have been working for so long. "It has also come to our notice that there are enough vacancies to accommodate the applicants before us," the bench said.

Authorities were directed to consider regularising these applicants and give age relaxation and training for those who did not possess matriculation skills within three months.

Mr. Dasgupta told The Hindu later that the meeting came in the backdrop of "biggest nationwide strike" by trade unions on February 28, which sent a clear message registering a strong protest against the policies being pursued by the Congress-led Central government.

According to Mr. Dasgupta, Mr. Mukherjee agreed to hold a meeting with leaders of all trade unions. For the first time unions across the political spectrum, including the Congress-backed Indian National Trade Union Congress, joined the strike. Although there are reports that many in the Congress leadership were not happy over the turn of events, Mr. Dasgupta said the government cannot ignore the voice of the people.

Mr. Mukherjee, who is the principal political manager for the UPA government, promised to hold the meeting after the presentation of the budget, Mr. Dasgupta said

WE WISH YOU A HAPPY HOLI AND INTERNATIONAL WOMEN'S DAY !

GDS/CHQ/41/3/2011                                                Dated: 02.03.2012
To,
Ms. Yaesodhra Menon,
Member (P),
Postal Services Board,
Dak Bhawan,
New Delhi-110001
Subject: - Introduction of RSBY (Rastriya Swasthya Bima Yojna) for GDS employees.
Ref:- Your office letter No. 6-10/2009-PE-II dated 13.01.2010
Madam,
A kind reference is invited to the proposal of introduction RSBY for GDS employees as intimated vide your letter under reference. We had proposed certain improvements in the proposed scheme keeping in view the ground realities prevailing in the rural area where the GDS employees work vide our letter no dated 24.02.2010 and 8.08.2011 Since then nothing has been heard and we donot know the fate of the proposal.
You will kindly agree that the low paid GDS employees urgently deserve some scheme for provision of health services. The proposed scheme of RSBY, in its present form with certain improvements as suggested by us is a right step in providing health services to the GDS employees, though a small step. We strongly hold the view that every big journey starts with a proposed RSBY was a step in the right direction and should have been brought in place small step taken is the right a direction. With the improvement suggested by us. We are of strong view that this scheme should not be allowed to die a natural death.
We, therefore, request you kindly to vitalize the proposal in the interest of the employees. We shall always be available to offer further inputs as and when required.
An expeditious action is requested.
Yours faithfully,
--
S.S.Mahadevaiah
General Secretary
All India Postal Extra Departmental Employees Union
Posted by RURAL POSTAL EMPLOYEES at 7:16 PM