You have already been informed that the Govt. of India, Ministry of Finance and the department of expenditure refused to include GDS wage structure and service conditions in the purview of 7th Central Pay Commission. We would like to recall the agreement signed by Member (P) and our union during the Feb, 2014 indefinite strike on 21-2-2014. As per the agreement, the department has to appoint a judiciary committee to examine the wage structure and service conditions of GDS.


As per the information we got confidentially, the Department of posts is going to appoint a one man committee under the Chairmanship an officer violating the agreement.


The Department of posts asked our CHQ to submit terms and reference to the one man committee on or before 30-11-2014. Our CHQ refused to submit the terms of references and demanded for appointment of a judiciary committee.

Our union vehemently opposed the decision of the Department and ready to plunge into trade union action to demand a judiciary committee. To achieve this demand our union issued notice to the Department of posts on 14.11.2014 stating that A Massive Dharna will be launched at Dak Bhavan in 19-12-2014 at 9:00 A.M.

CHQ is requesting to send Quota and donation through Bank D.D. to meet the expenditure of the agitational programmes.
With struggle greetings 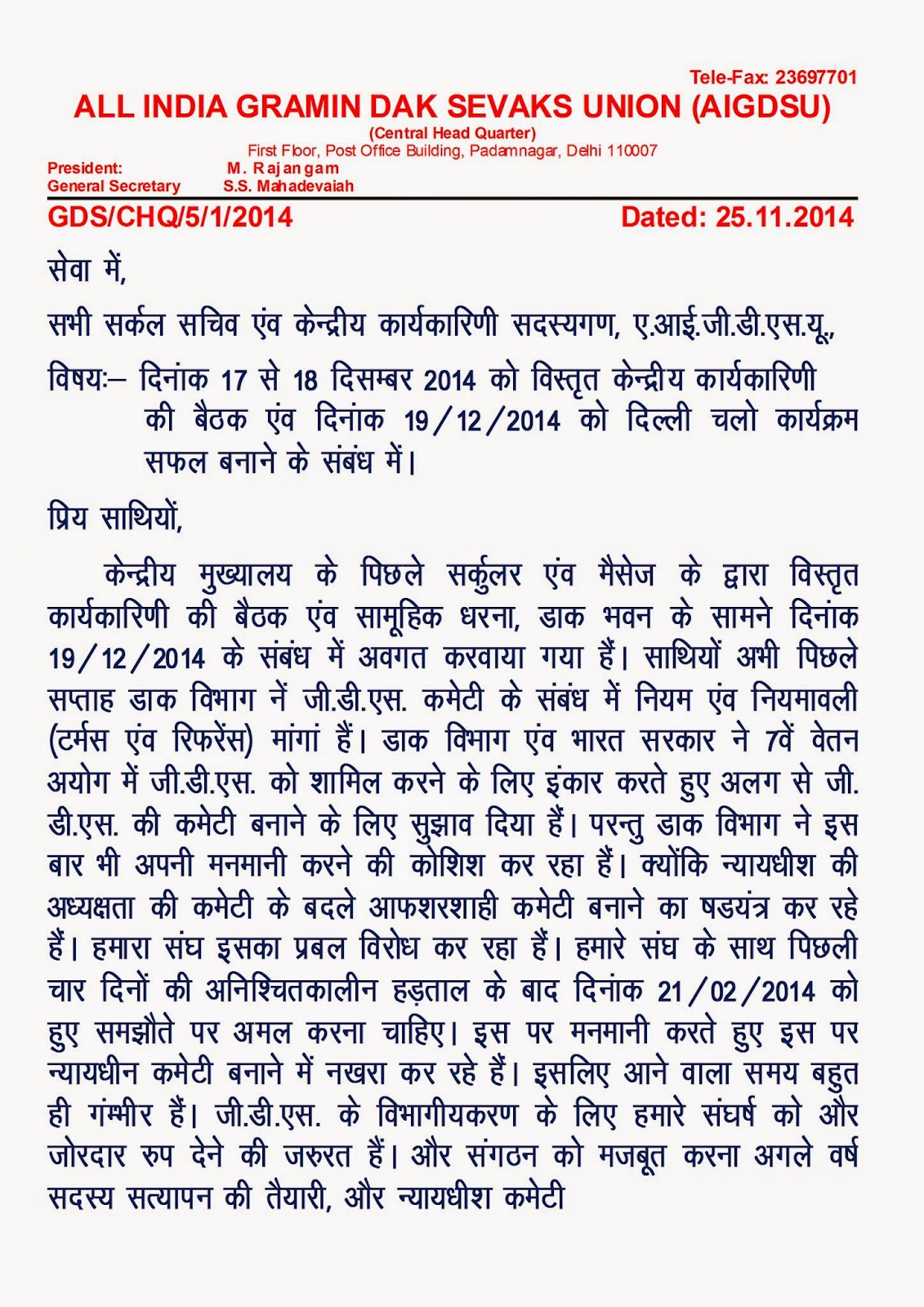 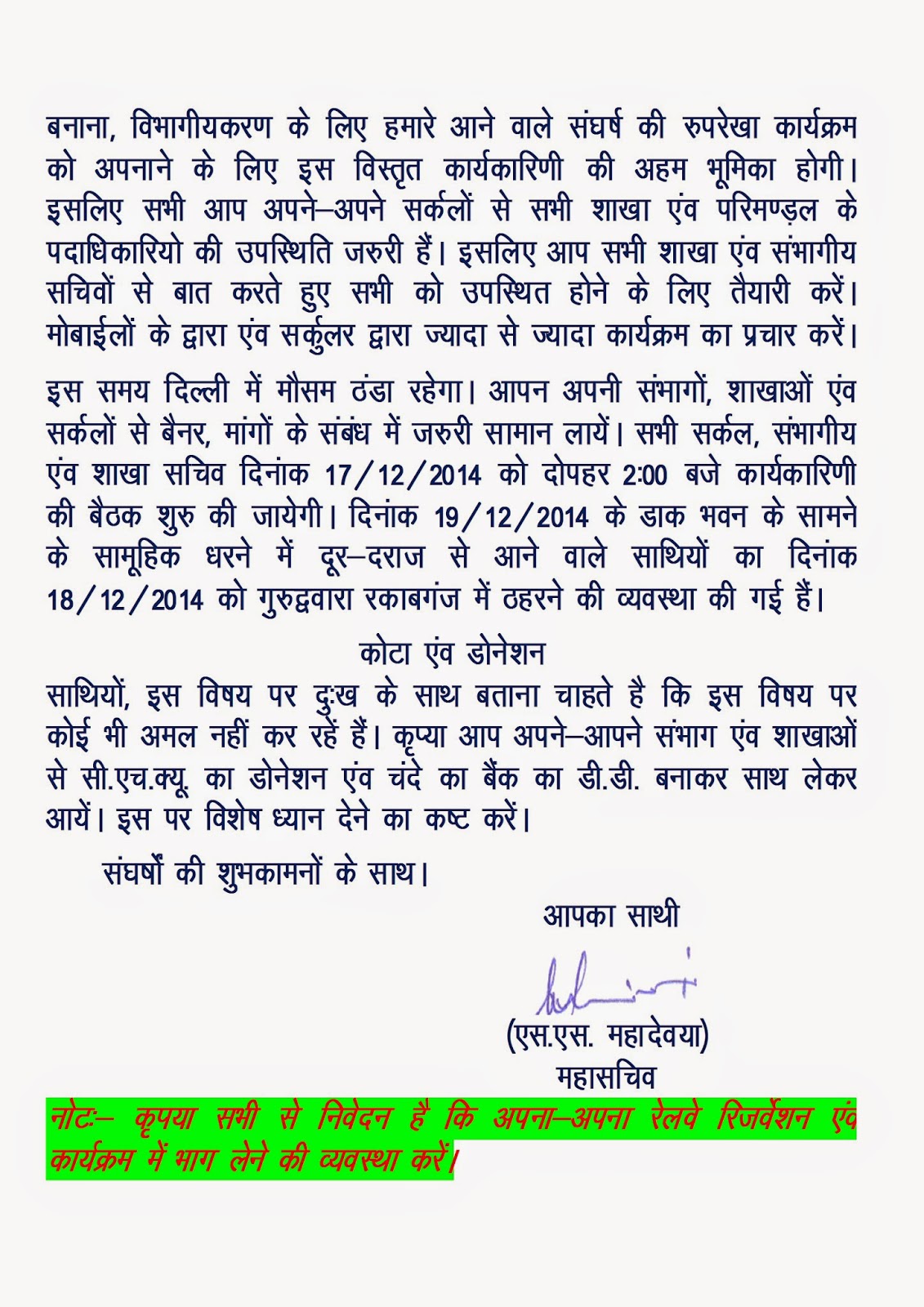 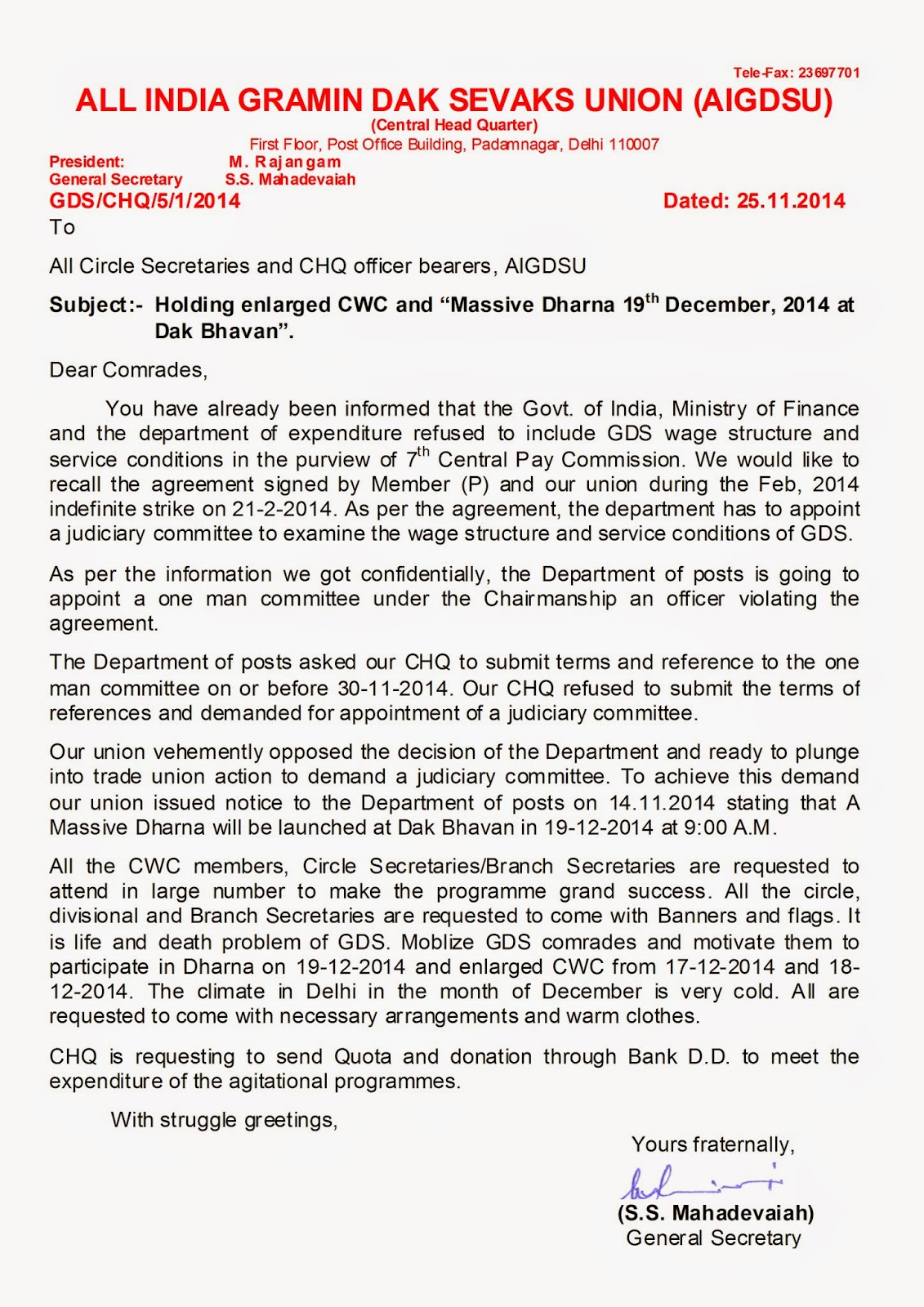 Posted by RURAL POSTAL EMPLOYEES at 11:51 AM 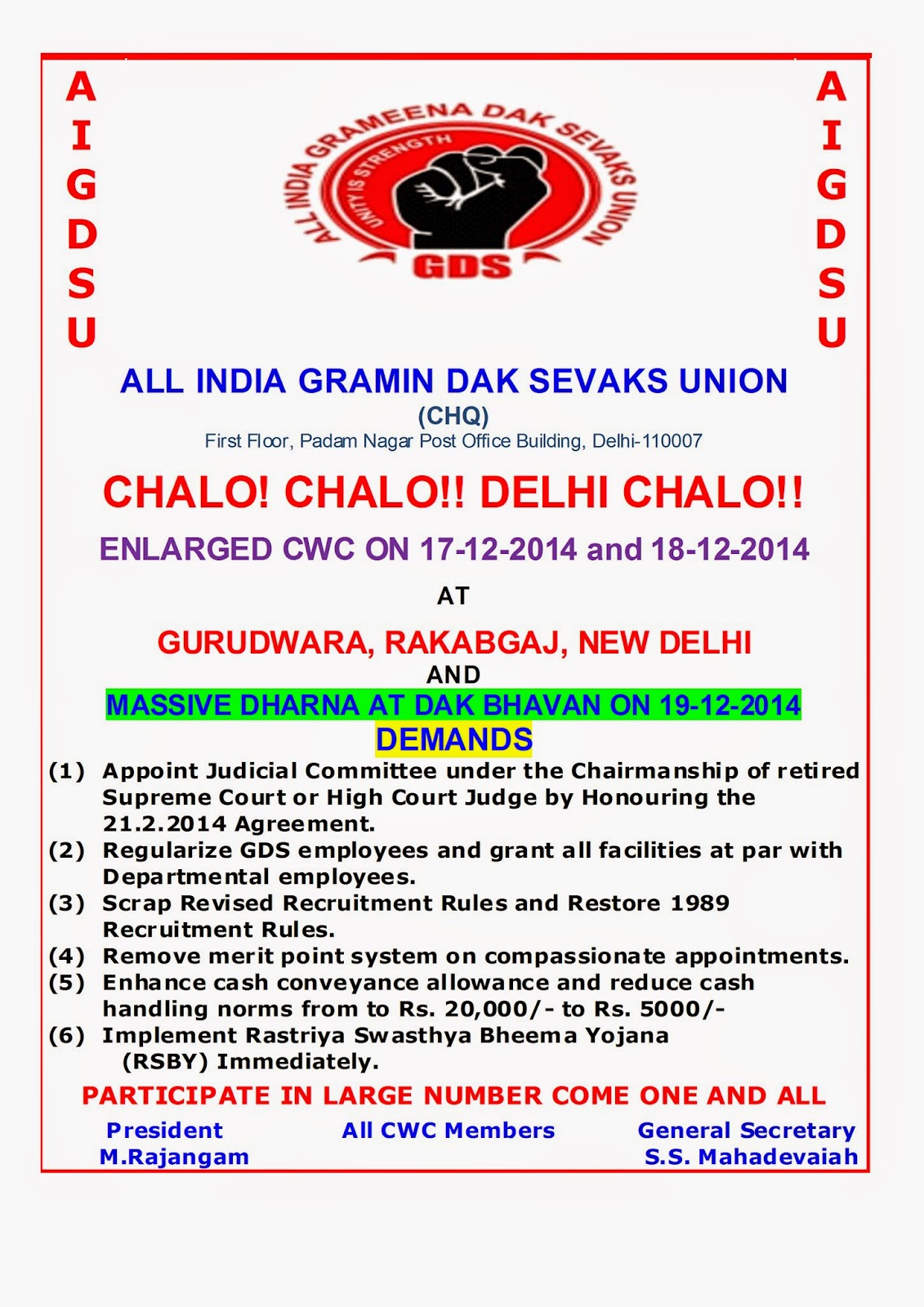 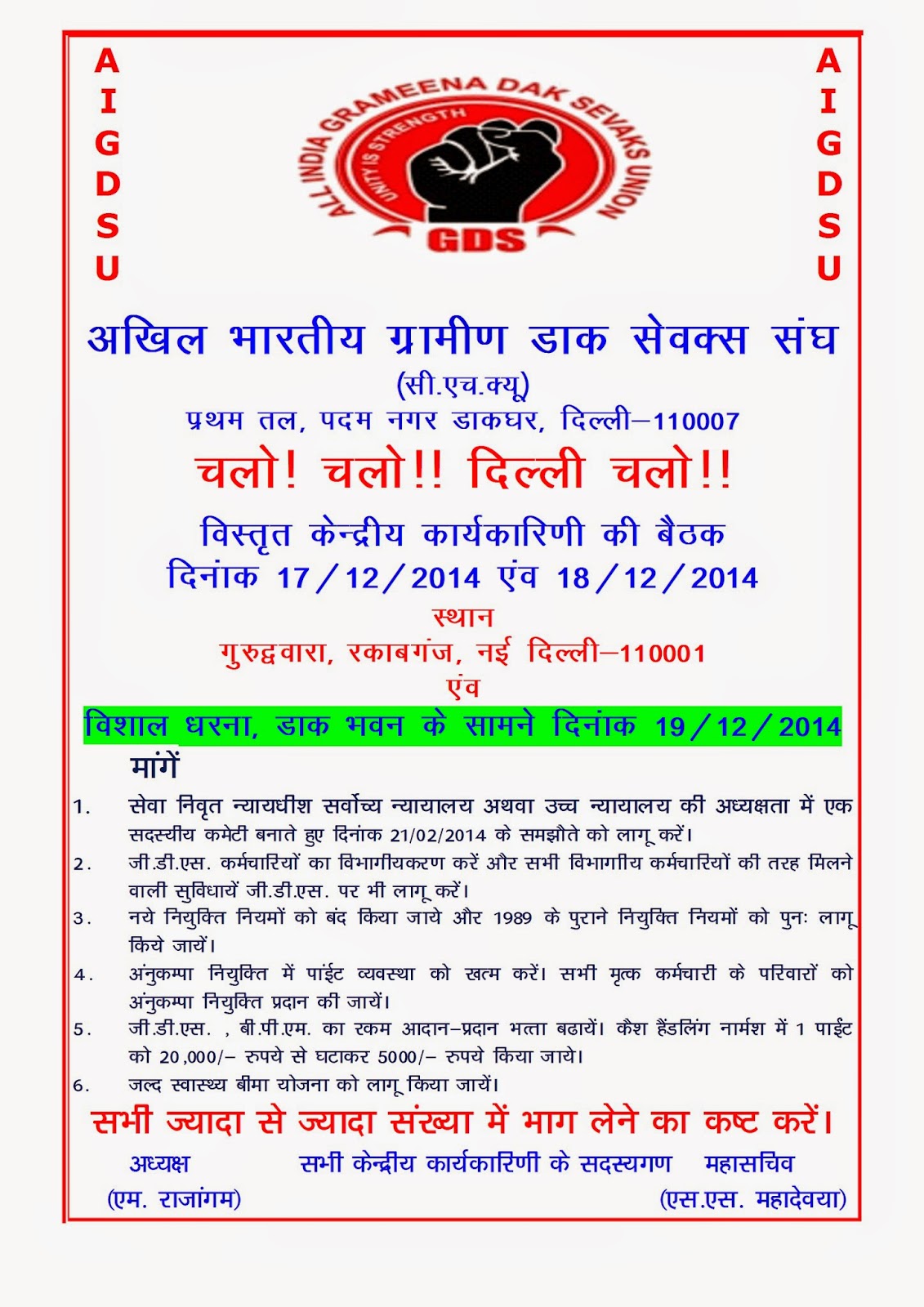 There is no other way except struggle
AIGDSU is the symbol of struggle and sacrifice. AIGDSU never shirked of its responsibility and organized struggle after struggle to realize our goal.
2014 February 18-21 indefinite strike for the settlement of pressing and major demands of GDS is historical in the history of postal trade union movement. The most respectable and useful agreement between the Department of posts and our union is the outcome of the successful struggle.
Though there is a positive response from the DOP&T and Department of posts regarding inclusion of GDS wage structure and service conditions in the purview of 7th CPC, the Ministry of Finance and the department of expenditure are not willing for inclusion.
The Ministry of Finance suggested that the Department of posts to form a separate committee to examine the GDS wage structure and service conditions.
As per the agreement signed on 21-2-2014 the Department of posts has to appoint a judicial committee under the Chairmanship of retired Supreme Court or High Court Judge.
The Department of posts is not taking any initiative steps till date to appoint a judicial committee.
A delegation headed by our General Secretary Com. S.S. Mahadevaiah met the Hon’ble Minister of Communication and IT Sri Ravi Sankar Prasad and explained the situation and submitted a memorandum along with agreement copy requesting him to honour the agreement signed by Member (P) and Com. S.S. Mahadevaiah.
Our union demanded Member (P) and the Department of Posts to honour the agreement by appointing a judicial committee.
We are awaiting the reply from the honourable Minister of Communications and IT.
CHQ vehemently believe that there is no other way except struggle for the settlement of justified demands of GDS keeping this in view CHQ issued three phase country wide programme in the month of December 2014. Notice was issued to the Department of posts on 14.11.2014.
CHQ requests all office bearers, Circle Secretaries, Divisional Branch Secretaries and well wishers of GDS making 2014 December 17-19 agitational programme a thundering success.
The further course of action will be decided after consultation of rank and file in the enlarged CWC to be hold at Gurudwara Rakabgunj, New Delhi-110001 from 17-12-2014 to 18-12-2014.
CHQ is also requesting one and all to attend the programme in large number to exhibit our unity and strength.
Posted by RURAL POSTAL EMPLOYEES at 12:58 PM


In this connection we would like to recall our discussions and agreement between Member (P) and this Union during Feb, 2014 indefinite Strike.


We request you once again to constitute a Judiciary Committee to honour the agreement.


If the Judiciary Committee is appointed, we shall submit the draft terms of Reference within the prescribed date.


A line in reply is highly appreciated.

Copy to:- All CWC Members 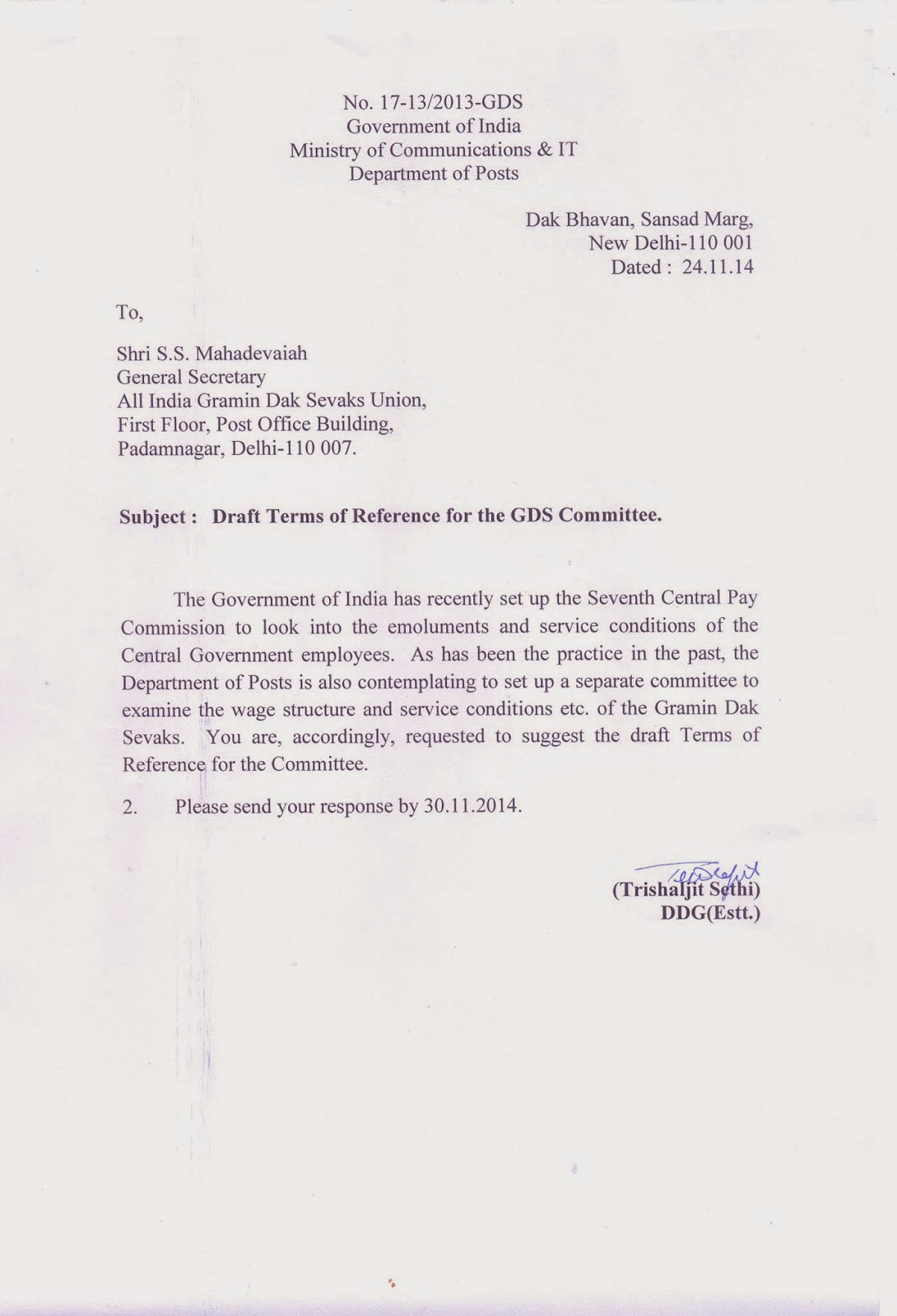 Be careful about the wolfs coming under the disguise of goats.

Be careful about the wolfs coming under the disguise of goats.

We have a doubt that the PJCA (NFPE-FNPO) leaders are suffering from Algiers disease unfortunately they forgot the past history due to this chronic disease. We are nothing to do except express our pity and wishing them speedy recovery. But the GDS who are being continuously cheated and diverted by these great great leaders did not forget past history.

The so called leaders are roaring in papers and websites regarding indefinite strike for GDS to be included in the 7th Pay Commission. We would like to recall the past events once. The great great PJCA (NFPE-FNPO) leaders issued Indefinite strike notices four times and withdrew the strike four times on the fake assurances of the department without achieving single demand since 2004 cheating not only the GDS but also all categories of postal employees.

We are proud to say that we are the only one recognized union among the GDS fraternity in the Department of Posts. We are trying to do our best for the cause of GDS.

While you are sleeping in the dens, we are fighting for Rs. 3500/- bonus ceiling and achieved. We have conducted four days indefinite strike against the Govt. historically for inclusion of GDS in the purview of 7th CPC when you have supported the Govt. and attacked the indefinite strike with your kith and kin with false propaganda ignoring that you are the trade union leaders of sister unions.

It is open secret that the Finance Ministry and Department of expenditure refused the demand regarding inclusion of GDS in the purview of 7th CPC. Then only we demanded for judicial committee like justice Charanjit Singh Talwar Committee, which is called by so called NFPE leaders as “MAGNACARTA” to GDS. The PJCA leaders shamelessly trying to divert GDS saying that the recognized union wants one man committee and intentionally avoiding to say judicial committee.

We appeal the GDS who are under arrest in the iron hands of so called leaders coming out and join in the main stream to build united struggle for the cause of GDS under the banner of AIGDSU.


Please Note all
All Divisional/Branch Secretaries for requested to come with Banners/Flags etc to participate in 17th to 19th December 2014 Delhi Chalo programme. Your advised to bring warm clothes. As the temperature of Delhi will be below 10 degrees in the month of December. Reserved your to and Fro tickets immediately as there is heavy rush in Delhi Trains. All Divisional/Branch Secretaries are requested to make vide publicity regarding our CHQ Delhi programme among GDS comrades and motivate them to attend in large number.
Posted by RURAL POSTAL EMPLOYEES at 11:22 AM