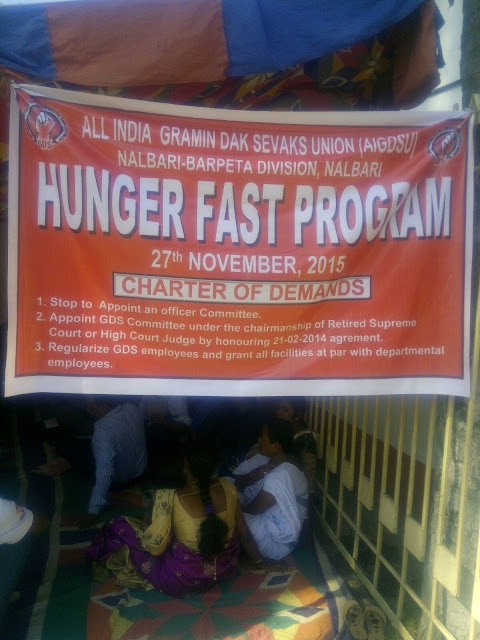 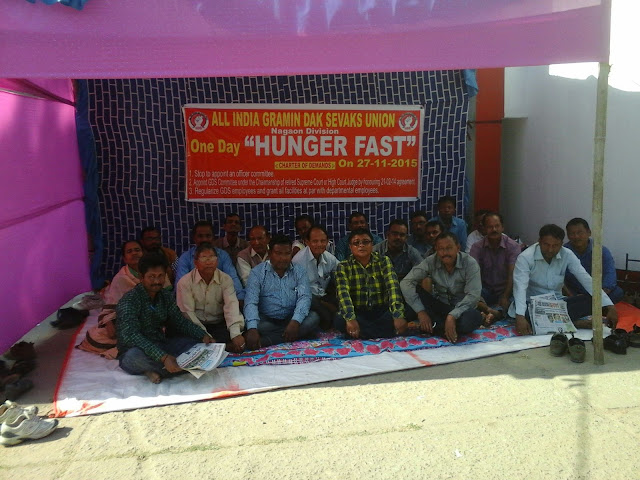 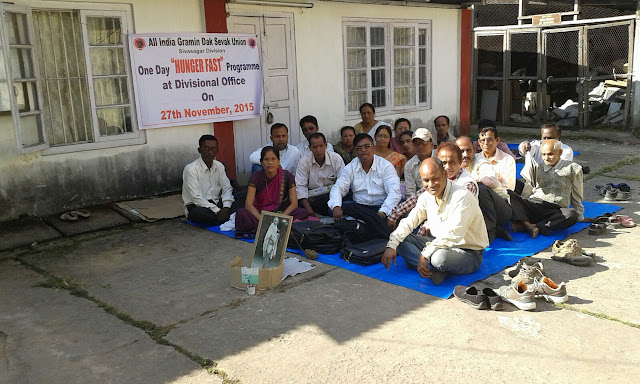 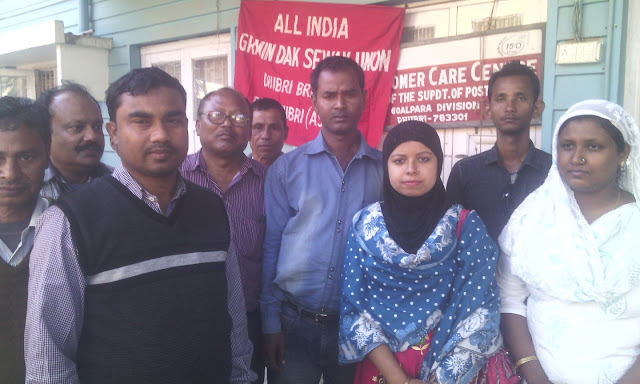 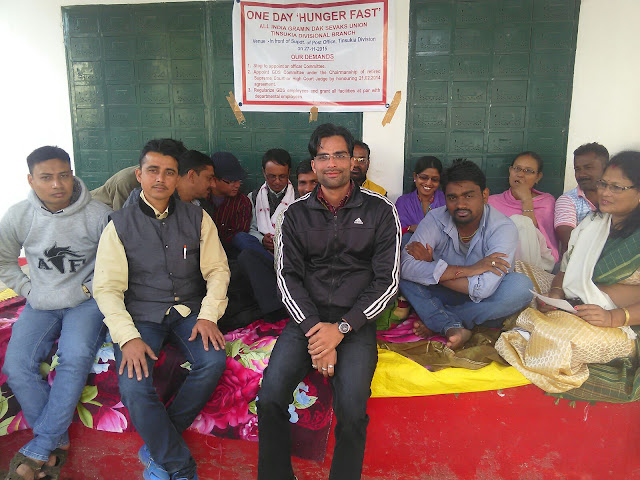 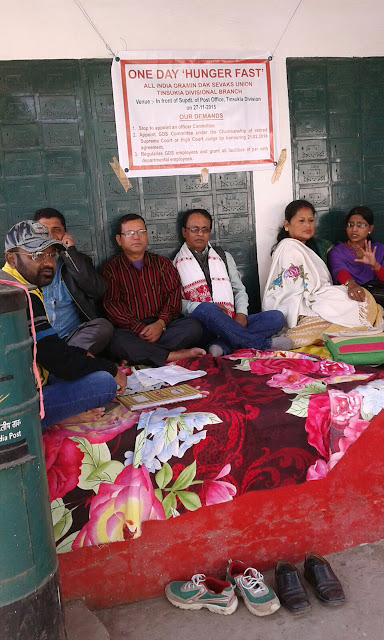 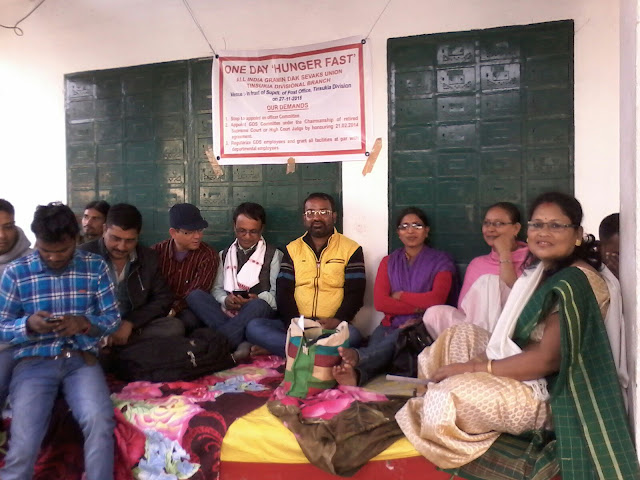 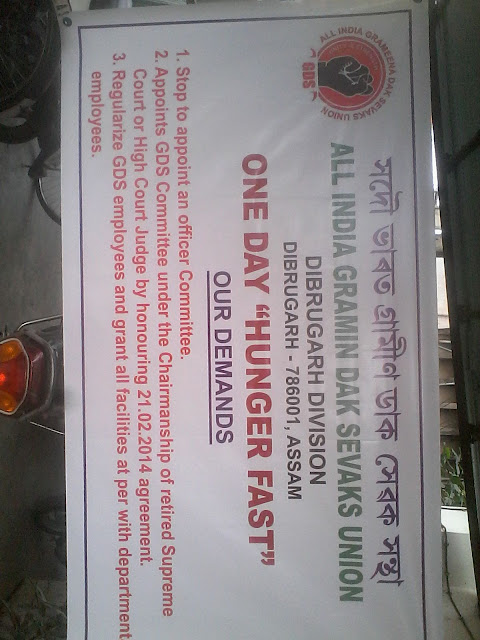 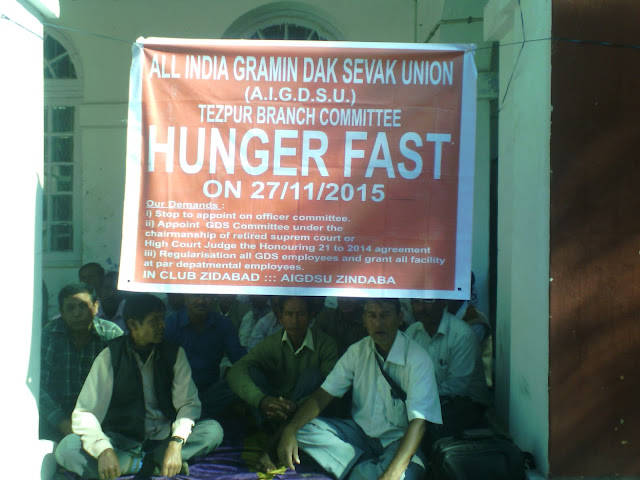 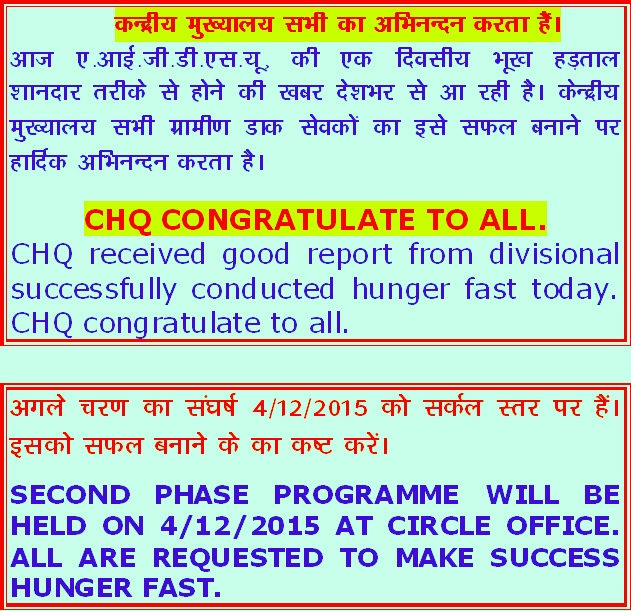 Today GDS hunger fast programme started in the all over Country. CHQ received report many Divisions. 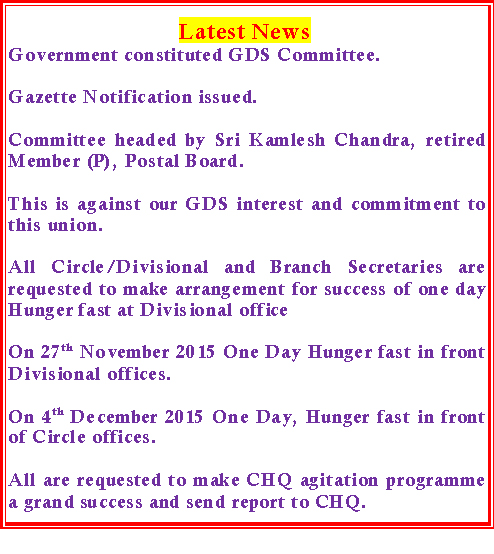 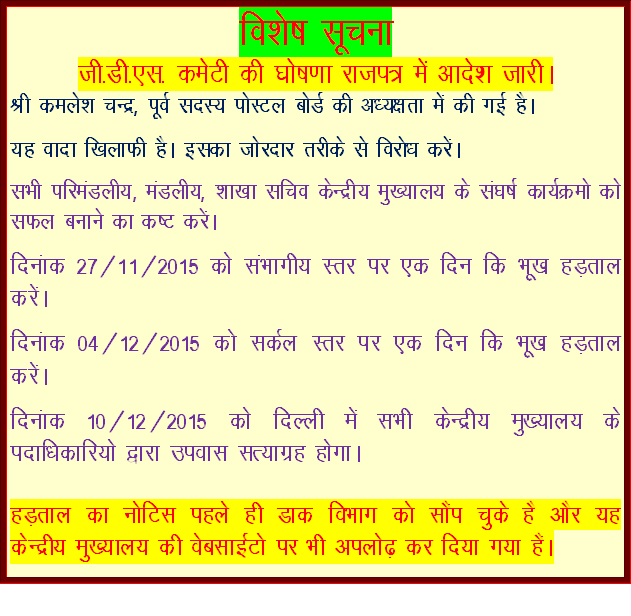 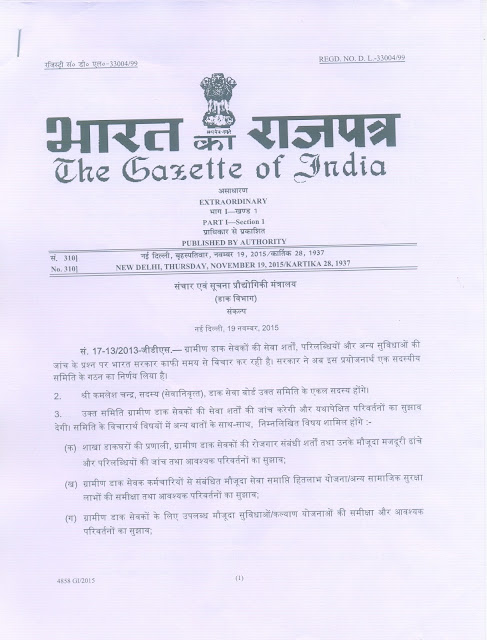 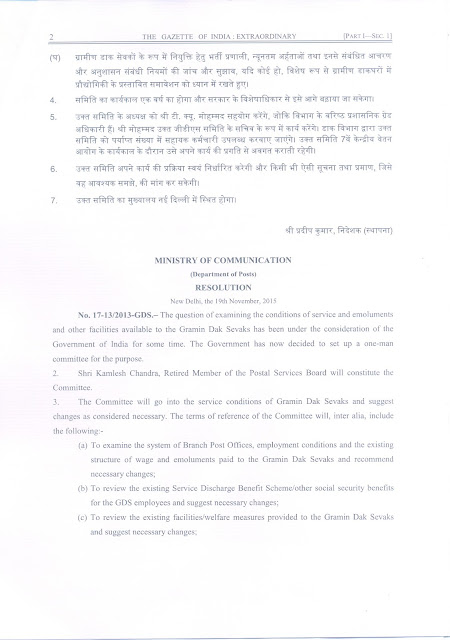 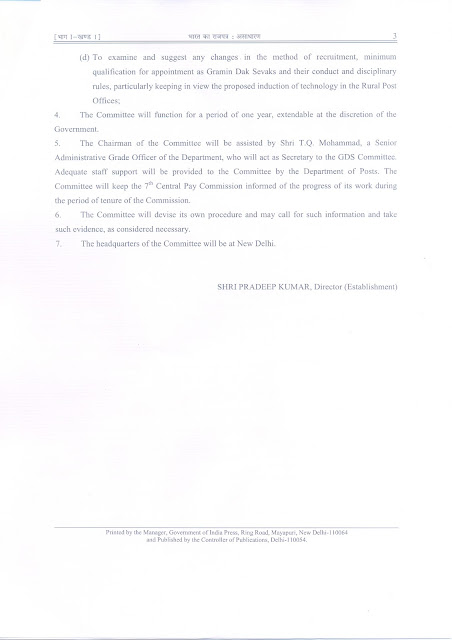 The 7th Pay Commission submits its report to the Central Government.
The much-awaited 7th Pay Commission report was finally submitted to the Minister of Finance a short while ago.
The four-member 7th Pay Commission, under the chairmanship of Chairman A.K. Mathur, had worked hard for 21 months to prepare the report. The report was handed over to the Centre today. Salaries for Central Government employees and pensioners for the years 2016 to 2026 will be based on these recommendations.
Recommendations prescribed by the committee and their impact and explanations will be given in a series of articles that will appear in future. 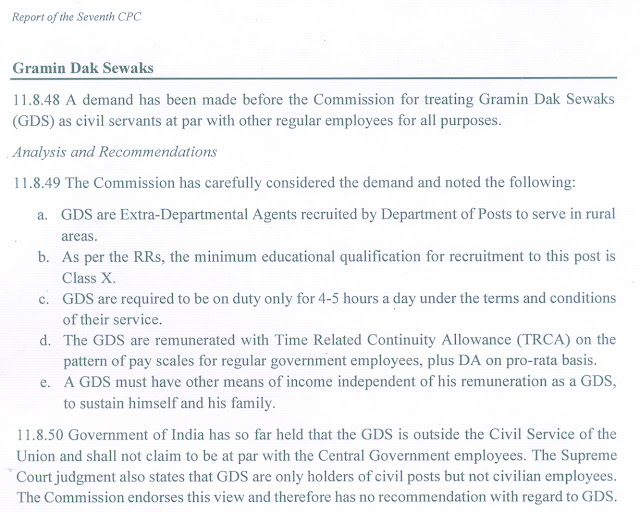 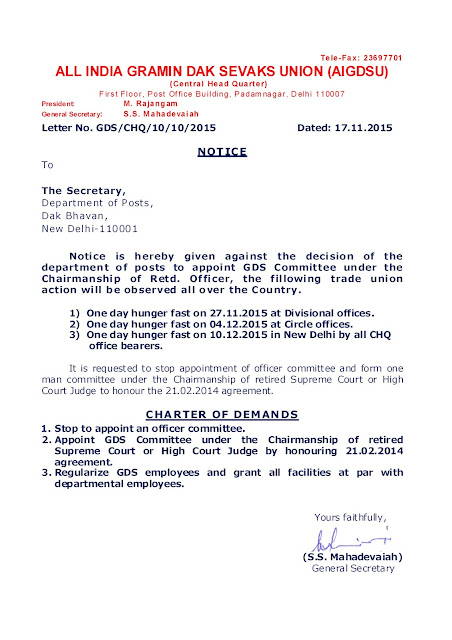 The commission’s report is to be submitted to finance minister Arun Jaitley. Photo: Pradeep Gaur/Mint
New Delhi: The much-awaited report of the seventh central pay commission looking into salary hikes for central government employees is likely to be submitted to finance minister Arun Jaitley this week.
The recommendations of the commission have to be implemented with effect from 1 January 2016 and are likely to further burden the government exchequer and put pressure on inflation.
In its medium-term expenditure statement released in August, the government said salary and pension expenditures are expected to rise by 15.8% and 16%, respectively, in 2016-17, thus exerting pressure on the fiscal deficit.
The previous United Progressive Alliance government constituted the commission under retired Supreme Court judge Ashok Kumar Mathur in February 2014 to decide on the revision of pay.
This time around, salary hikes are expected to be much more moderate compared to the sixth pay commission recommendations, which saw average salaries increasing by 20-30%. They resulted in an additional annual outgo of nearly Rs.18,000 crore for the Union government, besides arrears ofRs.30,000 crore.
But speculation is rife that the pay commission is likely to propose parity between the Indian Administrative Service (IAS) and other services like the Indian Revenue Service and Indian Police Service in terms of promotions and pay structure. This has led to major lobbying by both IAS and non-IAS officers, with the former keen to preserve the edge they enjoy at present, courtesy performing well in the civil services examination, Mint reported on 30 October.
Posted by RURAL POSTAL EMPLOYEES at 9:56 AM 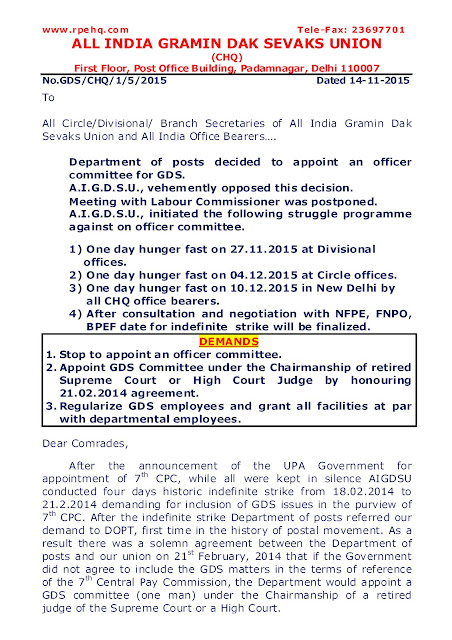 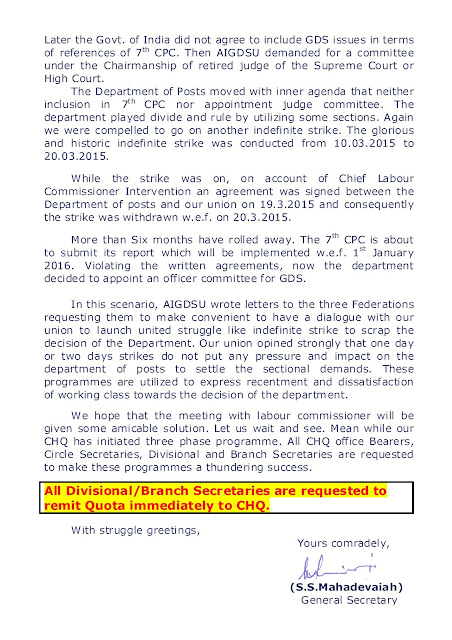 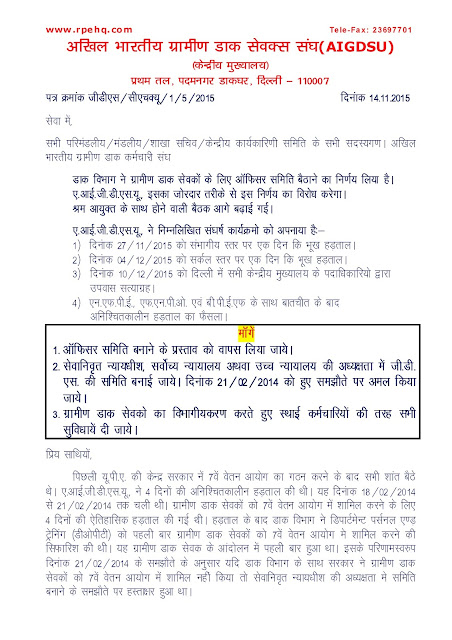 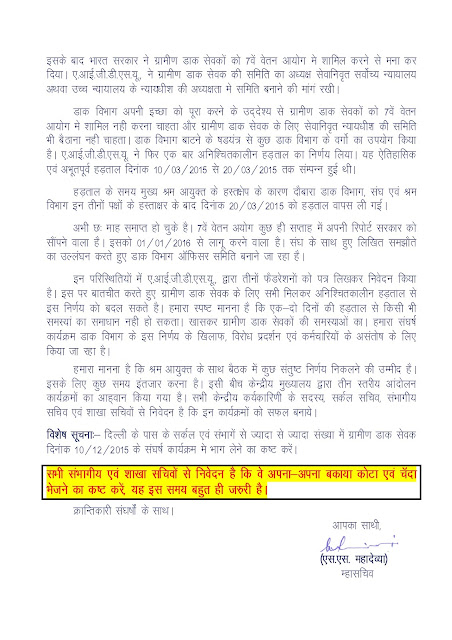 Posted by RURAL POSTAL EMPLOYEES at 11:22 AM

Meeting with Labour Commissioner was postponed. Next meeting date will be fixed on next week.


Meeting with Labour Commissioner was postponed. Next meeting date will be fixed on next week. 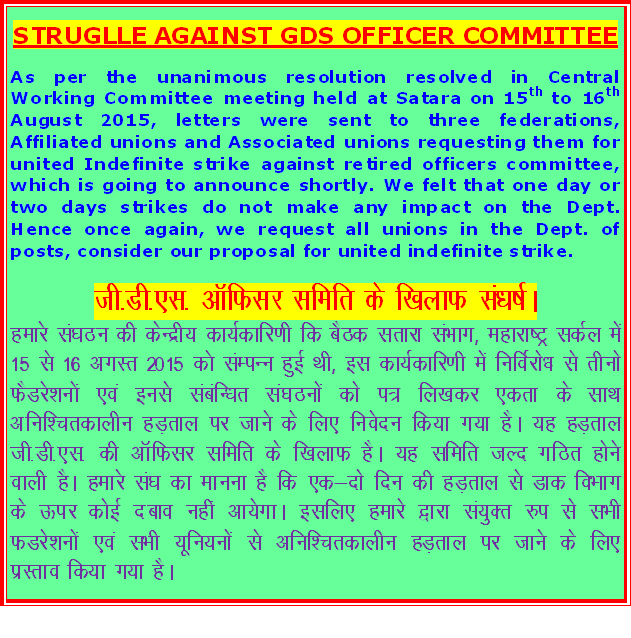 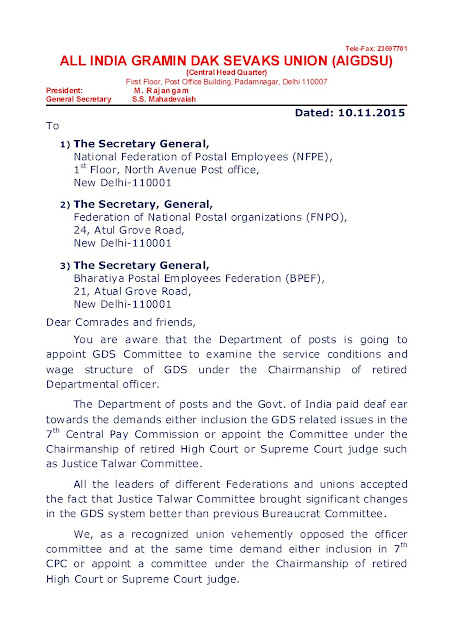 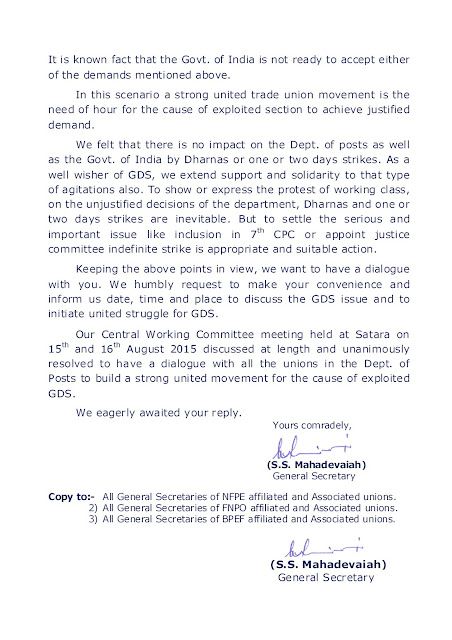 Posted by RURAL POSTAL EMPLOYEES at 11:31 AM 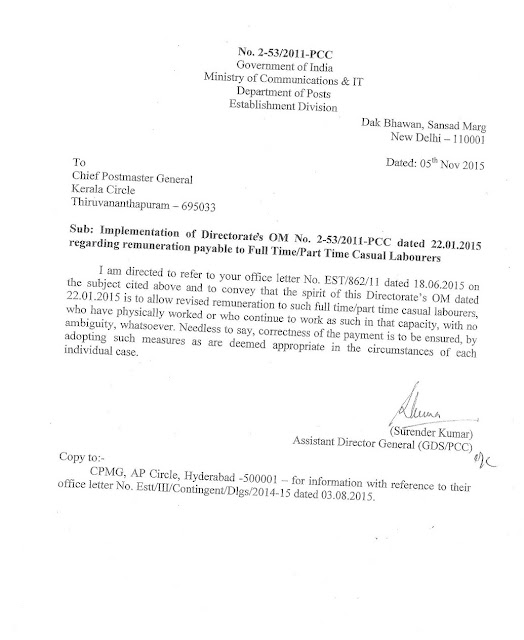 Mandatory use/opening of Savings Account in CBS Post Officers for maintaining/development of relationship of customers with Post office Savings Bank (POSB)- further clarifications to SB Order No.12/2015 regarding. 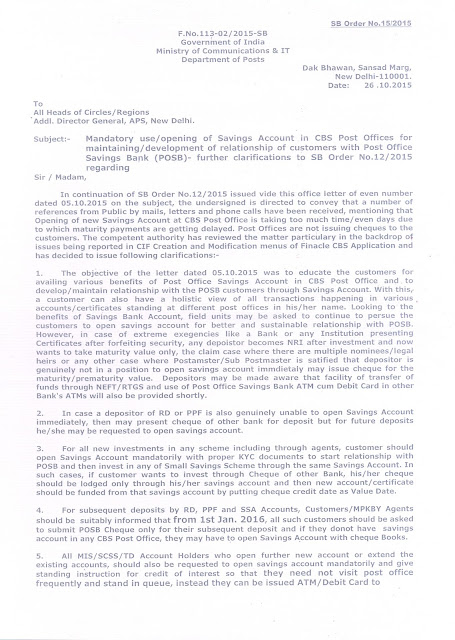 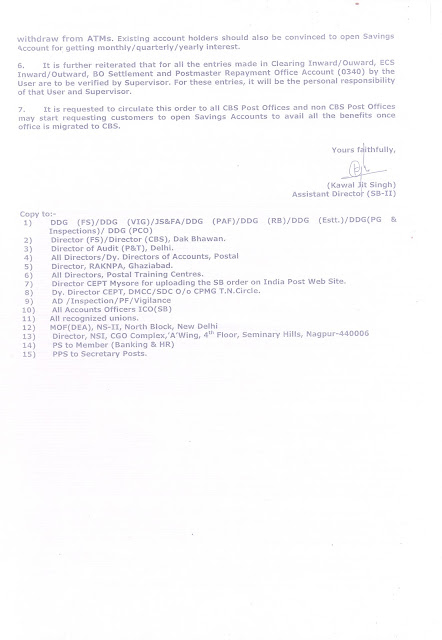 Posted by RURAL POSTAL EMPLOYEES at 11:30 AM