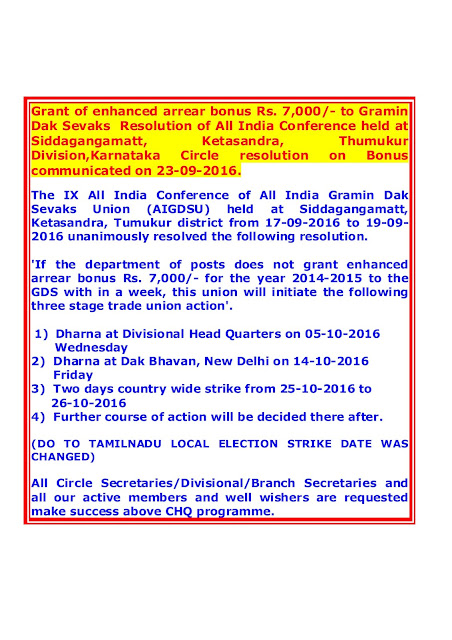 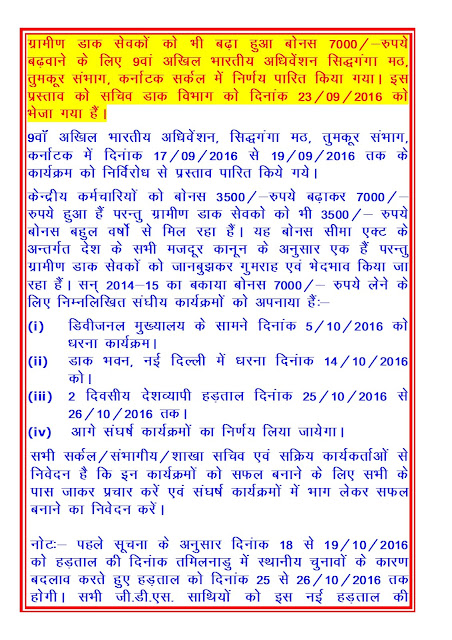 1.   Fixation of Pay Scales
1.1        The fixation of pay scales for the Regular Departmental employees were fixed on 2.57 factor as recommended by 7th CPC.
1.2        This union desires different formula for GDS to scrap the discrimination between Departmental employees and GDS employees on the following grounds.
1.3        50% D.A. merger was denied to GDS employees during 6th CPC where as departmental employees got that benefit.
1.4        Proportionate pay scales were not granted to GDS as recommended by 6th CPC to Departmental employees.
1.5        Hence this union urges upon the committee to consider the 3.25 factor for fixation of GDS officials.
1.6        While fixing the proportionate pay scale to GDS, generally minimum slab of concerning department cadre was taken in to consideration. Due to this the senior GDS who are rendering 30 or 40 years service and newly recruited  GDS granted equal slab of pay scale  pay scales may be granted on the basis of length of service.
1.7        Financial upgradation may be granted for 10/20/30 years service.

2.   Increment
2.1        3% increment was granted to regular Departmental employees on the basis of 7th CPC recommendation. The same may be granted to GDS on new pay scale.

3.   Working Hours of B.O.
3.1        The working hours of Branch Post offices are fixed as 8 hours. If the committee doesn’t find feasibility for 8 hours, minimum working hours may be fixed as 5 hours and there after fixed on the basis of work load.

7.   Medical Facilities
7.1        All the medical facilities recommended by 7th CPC to regular departmental employees may be granted to GDS.

8.   Gratuity
8.1        Several high courts and the Supreme Court obvisouly given judgements that the Gramin Dak Sevaks may be paid gratuity as per the gratuity act. The judgement copy is enclosed. Hence GDS may be granted gratuity at par with regular employees.

All Circle/Divisional/ Branch Secretaries of All India Gramin Dak Sevaks Union and All India Office Bearers….

After flag hoisting subject committee meeting commenced at about 11-00 hours to dissues the issues place in the notice by General Secretary. 21 circles participated in the conference on the very first day itself subject committee was inaugruated by Dr. Siddan Gowda Patil, Senior trade union leader and working president of AITUC, Karnataka State. The Central Working Committee was held on 16th September 2016 evening. The CWC was inaugurated by Com. S.S. Manjunath, Advisor AIGDSU. GDS Ruling Book compiled by CHQ is also unveiled by Com. S.S. Manjunath. The Conference started with lively discussions on the subjects of importance and concern to GDS employees.
OPEN SESSION
The open session commenced at about 10-30 hours on 18-09-2016 with Com. Rajangam in Chair.
Padmasri Dr. Sri Shivakumar Swamiji addressed the session and gave belessings to all GDS. Sri Siddalinga Swami assured that he will write a letter to the Prime Minister for early settlement of GDS justified problems. Com. S.S. Mahadevaiah felicitated both the Swamijis and got blessings.

Following this, all the agenda items were completely covered by the conference with due approval of the delegates of the conference.
Resolutions
The 9th All India conference in session discussed at length various burning issues concerning GDS and there fore urged unanimously for immediate settlement/improvement. The General Secretary S.S. Mahadevaiah proposed the following resolutions in the house for acceptance. The house adopted all the resolutions unanimously. The circular is herewith enclosed

Policy and Programme
'If the department of posts does not grant enhanced arrear bonus Rs. 7,000/- for the year 2014-2015 to the GDS with in a week, this union will initiate the following three phase trade union action'.

All are requested to make CHQ struggle programme grand success. Membership verification will be coming soon. Try to improve our union membership in all quarters. Build greater unity among GDS.
With struggle greetings
Yours comradely 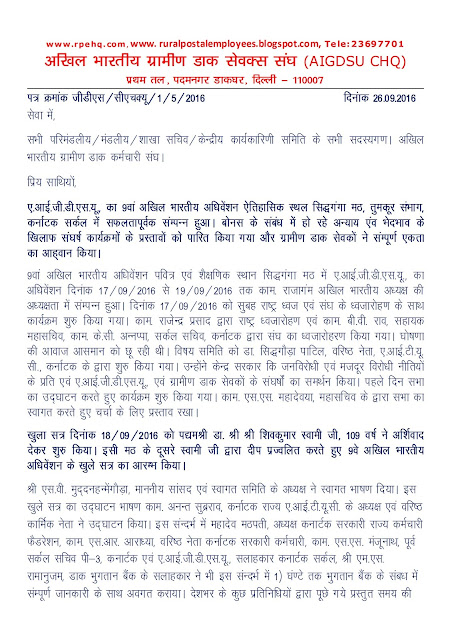 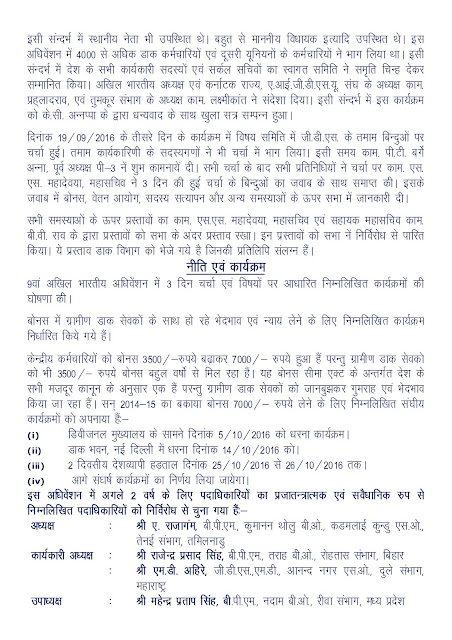 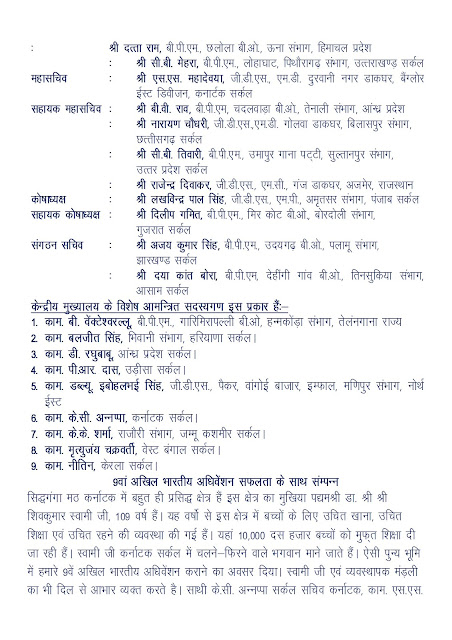 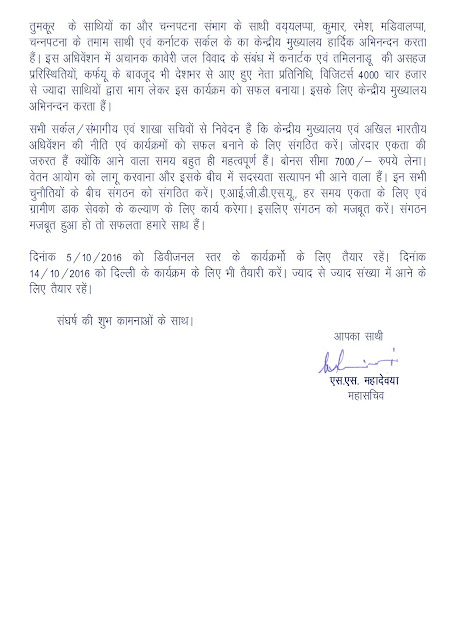