Most respectfully we on behalf of 2.60 lacs of Gramin Dak Sevaks, the humble servants of the Gramin population urge upon you to consider the following submission in a head-of-family manner and issue necessary orders:

2.     That in an attempt to remind the Department of Posts of its commitment signed on 21.2.2014 and to honour the commitment so that the Government may not be accessed of dishonoring the written commitment the GDS employees staged a strike, a simple strike peaceful and calm.

3.     That there was no subpages intimidation or violence. This was a simple way of demanding justified from the elders of the department. There was nothing to threaten the Government in any way. It was the most peaceful show the desire to get what was promised.

4.     That the Gramin Dak Sevaks have cleared the pending work effactively and there has been no drayage done. All work is being done efficiently and in an atmosphere of peace and tranquility.

That sweet labour relations are always most productive. To ensure this, it is necessary to erase the scar that has occurred to the Gramin Dak Sevaks the smallest is the family.

We, therefore, very humbly request your honour to issue orders that the period of strike be treated as aid leave. This will not cost the Government any extra expenditure as otherwise the sevaks will avail the paid leave. On the other hand this will promote even better and tranquil labour relation.

Hope you will kindly consider the submission dispassionately and issue orders as requested. 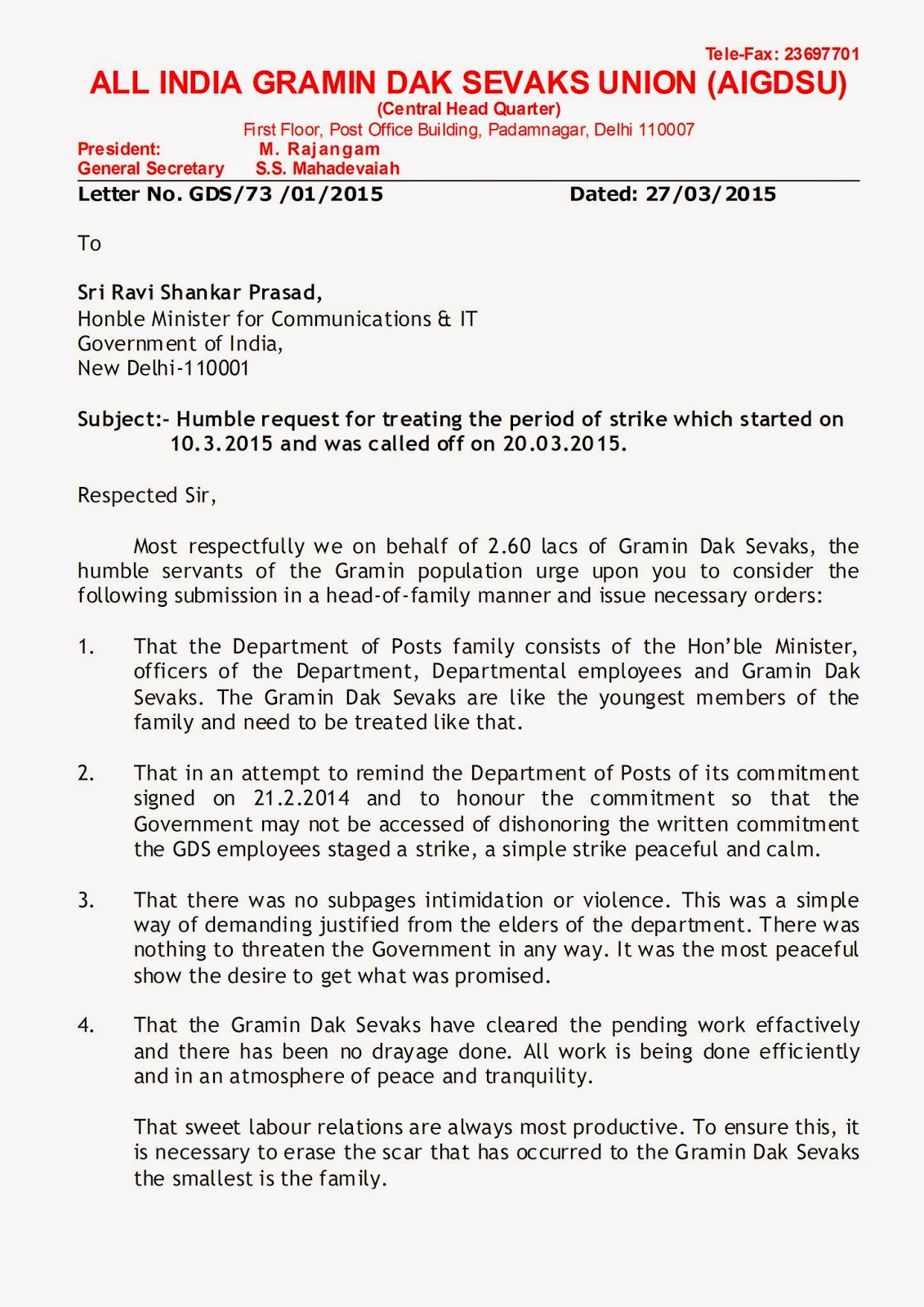 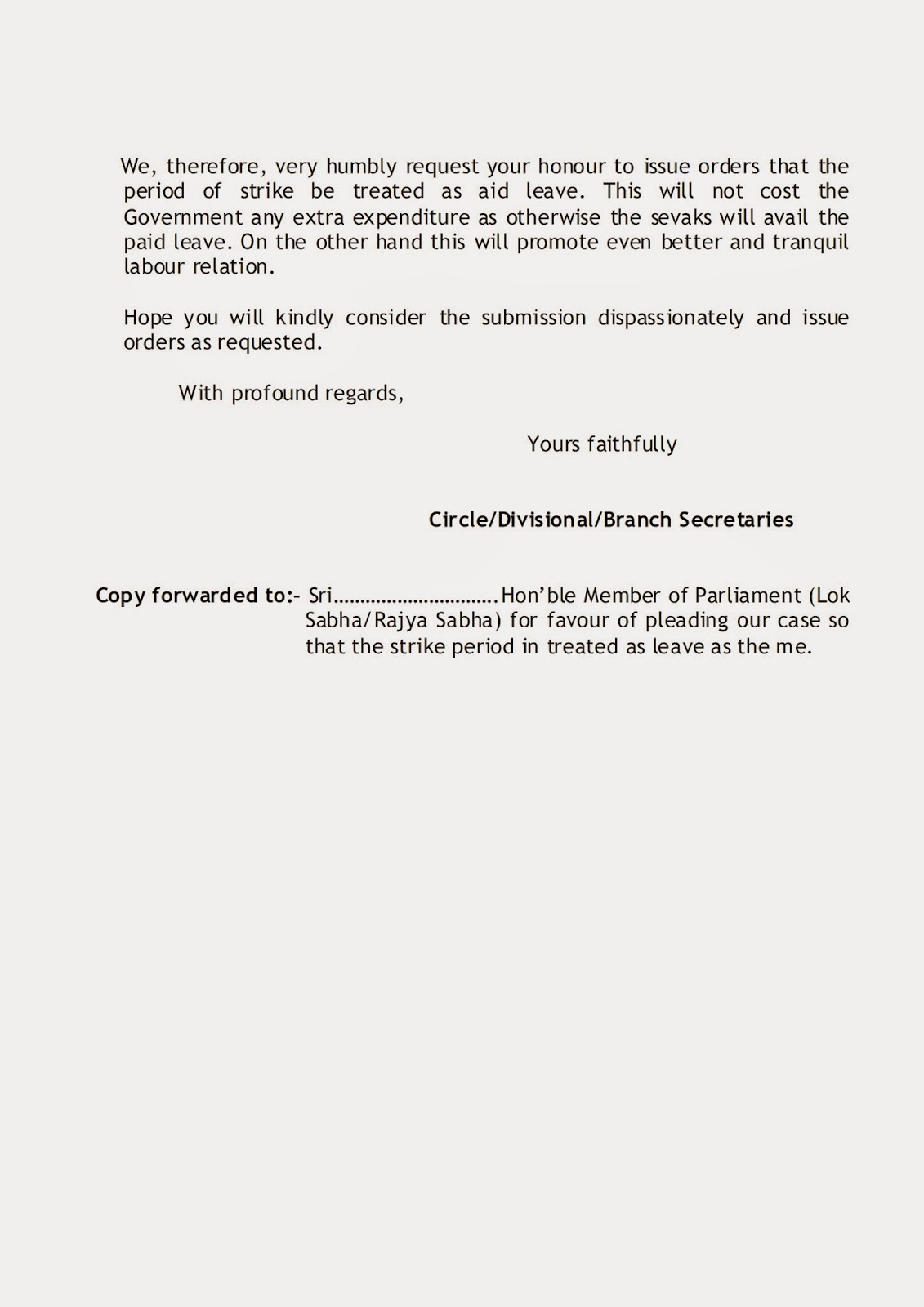 Posted by RURAL POSTAL EMPLOYEES at 9:51 AM

Request for honouring the judgement of High Court of Punjab and Haryana at Chandigarh-Reg.

Subject:-     Request for honouring the judgement of High Court of
Punjab and Haryana at Chandigarh-Reg.

This union is herewith forwarding the judgement of High Court of Punjab and Haryana at Chandigarh for your kind consideration and favourble action.

Suitable instructions may be issued to the competent authority for the implementation of the cited judgement and requesting to extend the judgement to all GDS.

With regards
Yours faithfully,

*****
Argued by:- Mr. Namit Kumar, Advocate
for the appellant in all the appeals.

2.     The only issue to be adjudicated in these appeals is as to whether Extra Departmental staff of the Post Offices earlier governed by the Posts and Telegraphs Extra Departmental Agents (Conduct and Service) Rules, 1964 (for short, the Rules of 1964) and now governed by the Gramin Dak Sevak (Conduct and Employment) Rules, 2001 (for short, the Rules of 2001) is covered under the Payment of Gratuity Act, 1972 (hereinafter called the Gratuity Act) and thus, is entitled for payment of gratuity under the Gratuity Act by the employer?

3.     Private respondents in these appeals having superannuated from their respective posts (which they were manning), were paid ex-gratia gratuity @ half month’s basic allowance as drawn by them immediately before laying down their offices for each completed year of service, subject to a maximum of Rs.18,000/- or 16½ months basic allowance last drawn, whichever is less. In addition to payment of this ex-gratia gratuity, a severance allowance with a maximum limit of Rs.30,000/- was also paid.

7.     Claim of the appellant is that employee Darshan Ram, now represented by his legal representatives, was a civil servant and thus, was outside the purview of the Gratuity Act and could not have been granted benefit of gratuity under the said Act. Liability to pay additional amount of gratuity as ordered by respondent Nos.2 and 3 over and above the ex-gratia gratuity earlier paid by them, is questioned.

8.     Citing Union of India and others v. Kameshwar Parsad (1977) 11 SCC 650, it is contended by the counsel for the appellant that holder of a civil post is not entitled to payment of gratuity under the Gratuity Act and thus, the private respondents are not entitled for additional payment under the Gratuity Act, as was ordered by the Controlling Authority as well as by the Appellate Authority. It is claimed that affirmation of these orders by the learned Single Bench of this Court is also against law.

9.     It is alleged that all retrial benefits of the retiree Darshan Ram having been already paid, nothing more is due towards him and the Gratuity Act being not applicable, no further liability of the appellant exists.

10.    Countering this version, claim of the private respondents is that neither Darshan Ram was holding a civil post nor was he a civil servant and thus, he having died, his legal representatives are entitled to the benefit under the Gratuity Act.

11.    Per contra, contention of the private respondents is that merely because some protection in matters of departmental enquiries was available to Darshan Ram and to other equally placed employees with him at par with incumbents of civil posts, they were not holding civil posts and thus, cannot be denied applicability of the Gratuity Act to them since it is a beneficial social security legislation for the employees.

12.    Hearing has been provided to the learned counsel for the parties while going through the paper books.

13.    To adjudicate the controversy between the parties, definition of an employee as provided in Section 2(e) of the Gratuity Act is reproduced as below:

16.    Note II appended to Rule 3 of the Rules of 2001 is of great significance. In particular clauses (v) and (vi) of the Note II clinch the issue. For ready reference, these clauses are reproduced hereunder:

(vi)   A Sevak shall not claim to be at par with the servant of the Government.

17.    Clause (v) of Note II appended to Rule 3 of the Rules of 2001 (supra) specifically postulates that such Sevak is not a member of Civil Service of the Union and thus, clearly does not become a civil servant.

18.    Clause (vi) of Note II appended to Rule 3 of the Rules of 2001 (supra) makes the position even further clear as the Sevak is debarred from seeking parity with the holders of civil posts of the Government.

20.    In the impugned judgment, learned Single Judge has taken note of a Division Bench judgment of this Court in case Senior Superintendent of Post Offices v. Smt. Sham Dulari & others (CWP No.7576 of 2006) decided on 18.5.2006 whereby payment of gratuity under the Gratuity Act was allowed to similarly situated employees as are the private respondents in the appeals in hand. Decision of the Division Bench judgment of this Court was unsuccessfully challenged by the appellant-employer before the Hon’ble Supreme Court of India though there, the question of law was left open.

21.    Counsel for the appellant citing Union of India and others v. Kameshwar Parsad (ibid) has urged that the respondents were holding posts under the Central Government and thus, were not entitled to the benefits under the Gratuity Act. In this judgment, Hon’ble Supreme Court of India had considered the aspect of applicability of status of such employees viz. a viz. departmental proceedings only and had held that EDA employees were entitled to protection of Article 311 of the Constitution of India. If the private respondents have been held entitled to the protective umbrella of Article 311 of the Constitution of India in matters of departmental action against them, as is available to civil servants, ipso facto, it would not mean that they are holding civil posts and thus, are disentitled for the benefit of payment of gratuity under the Gratuity Act. The authority Union of India and others v. Kameshwar Parsad (supra) was also considered in the Division Bench judgment of this Court which has been discussed earlier.

22.    Viewed from another angle, as per scheme of the Gratuity Act, this statute is not applicable to cases where any other rule or statute is more beneficial than the Gratuity Act. By now, it is evident that the rules applicable to the private respondents were not more beneficial than the Gratuity Act, as even after payment of ex-gratia gratuity to them huge amount is payable to them under the Gratuity Act. In E.I.D. Parry (I) Ltd. v. G. Omkar Murthy 2001 (4) SCC 68 (Supreme Court), it was further held that more beneficial enactment is to be made applicable interalia in matters of payment of gratuity. In Municipal Corporation of Delhi v. Dharam Prakash Sharma 1998 (7) SCC 221 (Supreme Court), it was further held that employees of the Municipal Corporation are entitled to payment of gratuity notwithstanding provision of payment of retrial benefits to them under the CCS (Pension) Rules, 1972 wherein there was provision for payment of pension as well as gratuity to the employees of Municipal Corporation, Delhi.

23.    From the totality of facts and circumstances, nothing militating against the impugned judgment of learned Single Judge as also orders of the Controlling Authority as well as the Appellate Authority could be mustered by the appellant. The five appeals being without any merit are, consequently, dismissed.

Historic Indefinite strike of the GDS employees and further developments. 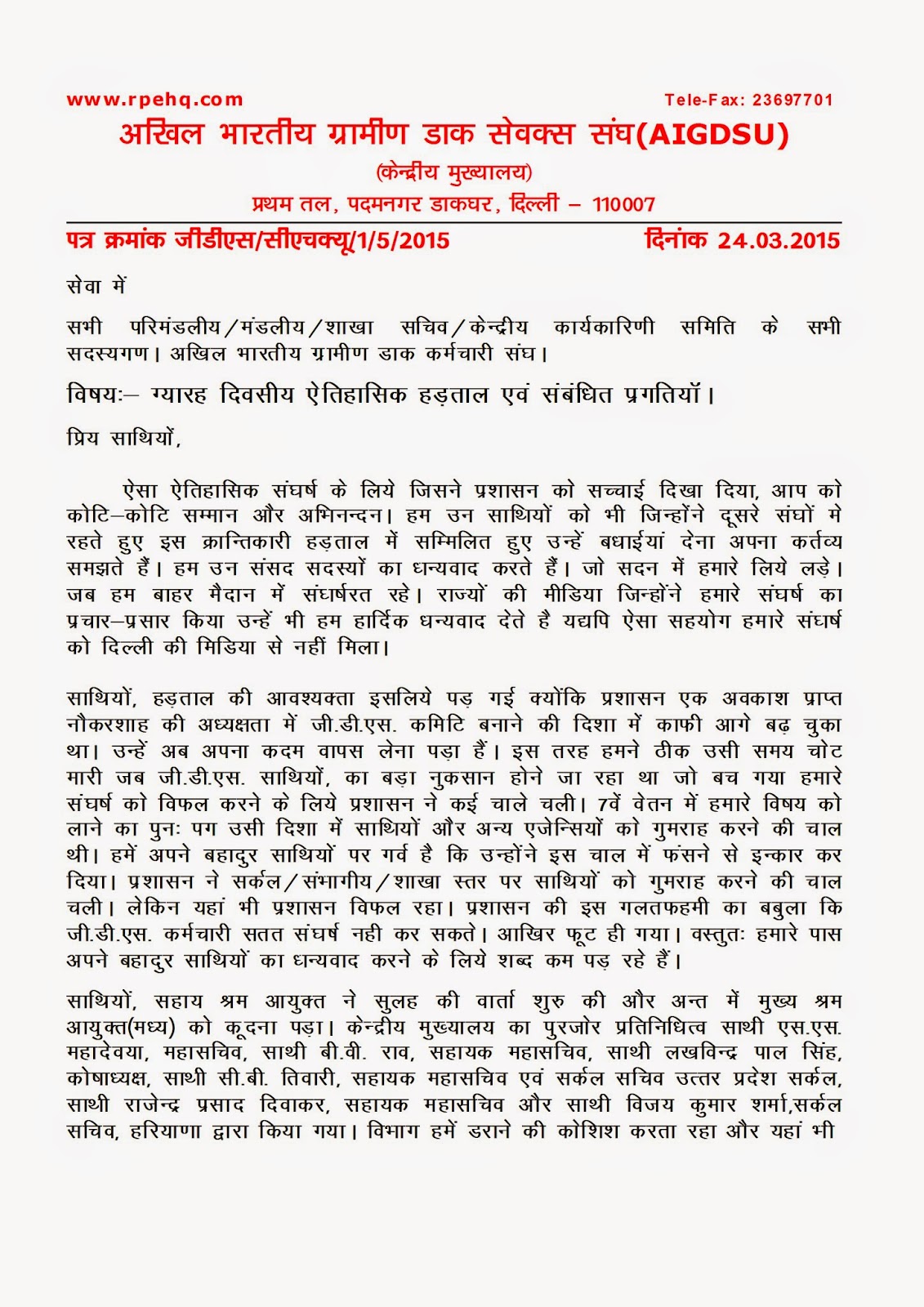 All Circles/Divisional/ Branch Secretaries of All India GraminDakSevaks Union All India Office Bearers….

Hats off and militant salutations for the heroic struggle Our members have fought which forced the administration to see the reality. We just be failing in our duty if we do not extend our hearty congratulations to those comrades belonging to other unions who actively participated in the strike. We also extend our heartiest thanks to several members of parliament who fought our case in the house while we were fighting in the field. The media in the states also deserves our thanks for highlighting our struggle prominently though we did not get that support of the media at Delhi.

Comrades, the occasion for a strike arise because the administration had done enough spade work towards appointing an GDS committee under a retired bureaucrat. They had to revert. Hence we have rightly hit before damage could be done to 2.60 Lakhs GDS employees by appointment of aNatraja Murthy like committee. The administration played all tactics to thwart our struggle again. A reference to the government to include our issues in the terms of reference of the 7th pay commission was a calculated step to mislead the members and also other agencies. We are really proud of our heroic comrades that they refused to fall into the trap. Comrades the administration under took another tactics to mislead our comrades at circle, divisional and branch formations where they miserably failed. The misgivings of the administration that GDS employees cannot wage a sustained fight has been proved entirely wrong by brave comrades. We really are running short of words to thank the Comrades.

On 19-3-2015 following the deliberations, the Chief Labour Commissioner (C) recorded the following minutes which is self explanatory.

They (The Administration) also submitted that they have already referred the matter to the department of Expenditure, Ministry of Finance to consider their issue for inclusion the terms and reference to the 7th CPC. In case the government does not include GDS wage structure and service conditions in terms and reference of the 7th CPC, The Department of Posts will examine the issue of constitution of the committee and consider the suggestions of the union in this regard.

The CLC then requested us to call off the strike and also requested the Department to initiate negotiations on other issues.

MEETING WITH POSTAL DEPARTMENT
Two hours meeting was held on 23.03.2015 to discuss and decide the charter of demands in D.G. office. The meeting was started at 3-30 PM and ended at 5-30PM. Discussions were held in congenial atmosphere.

We discussed at length on charter of demands and conveyed our views to the department for the consideration.

The minutes of the meeting are herewith enclosed.
Comrades, we fought in right time to put the pressue on the department. Our struggle is continuing for ever for the betterment of GDS employees. Organize and strengthen our union. CHQ requests all to convene meetings at all levels to review the indefinite strike to overcome weakness.
Comrades we again bow our heads in salutations before the steal like unity under strong will of our comrades.

Red salute to all.
Yours faithfully 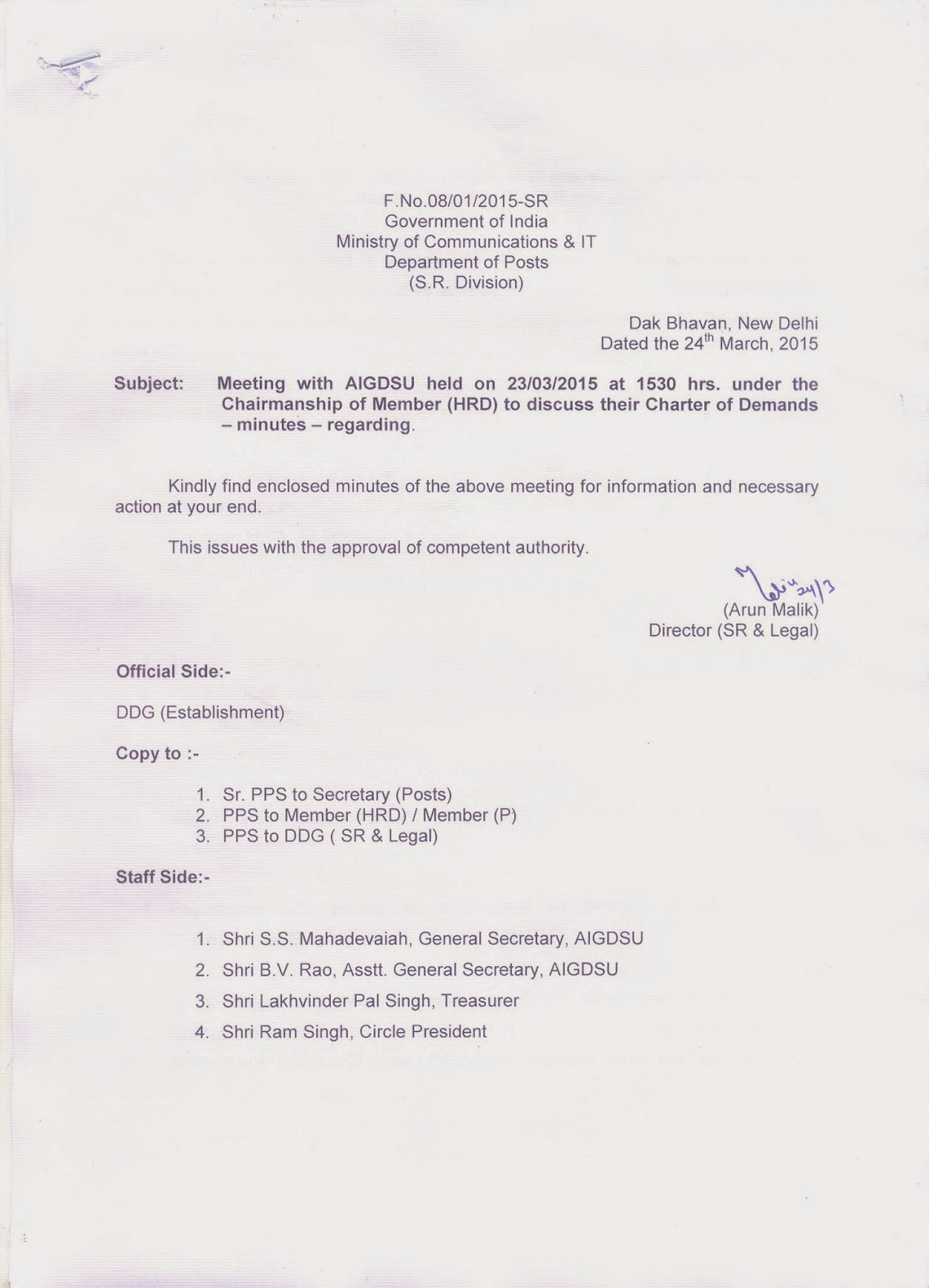 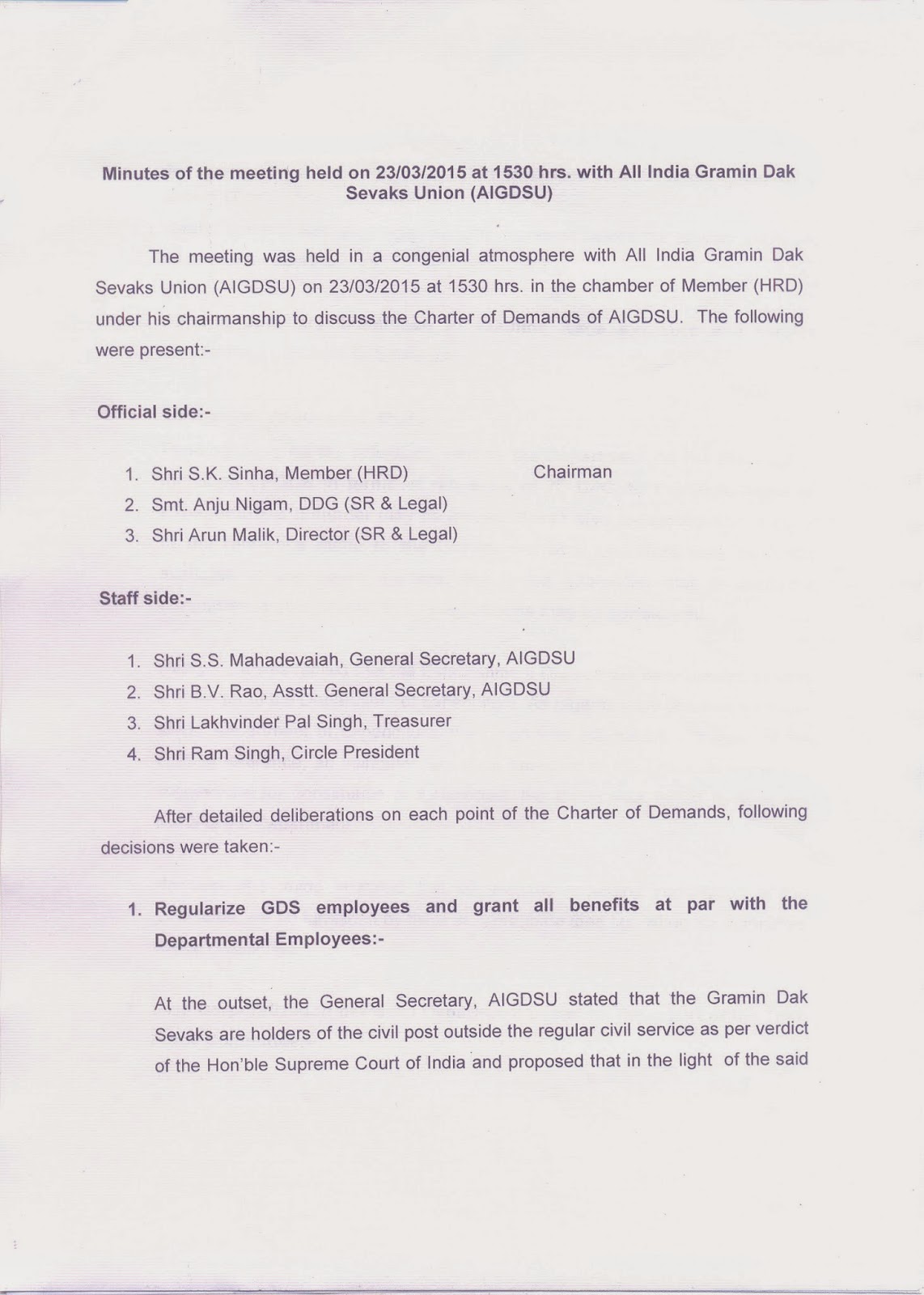 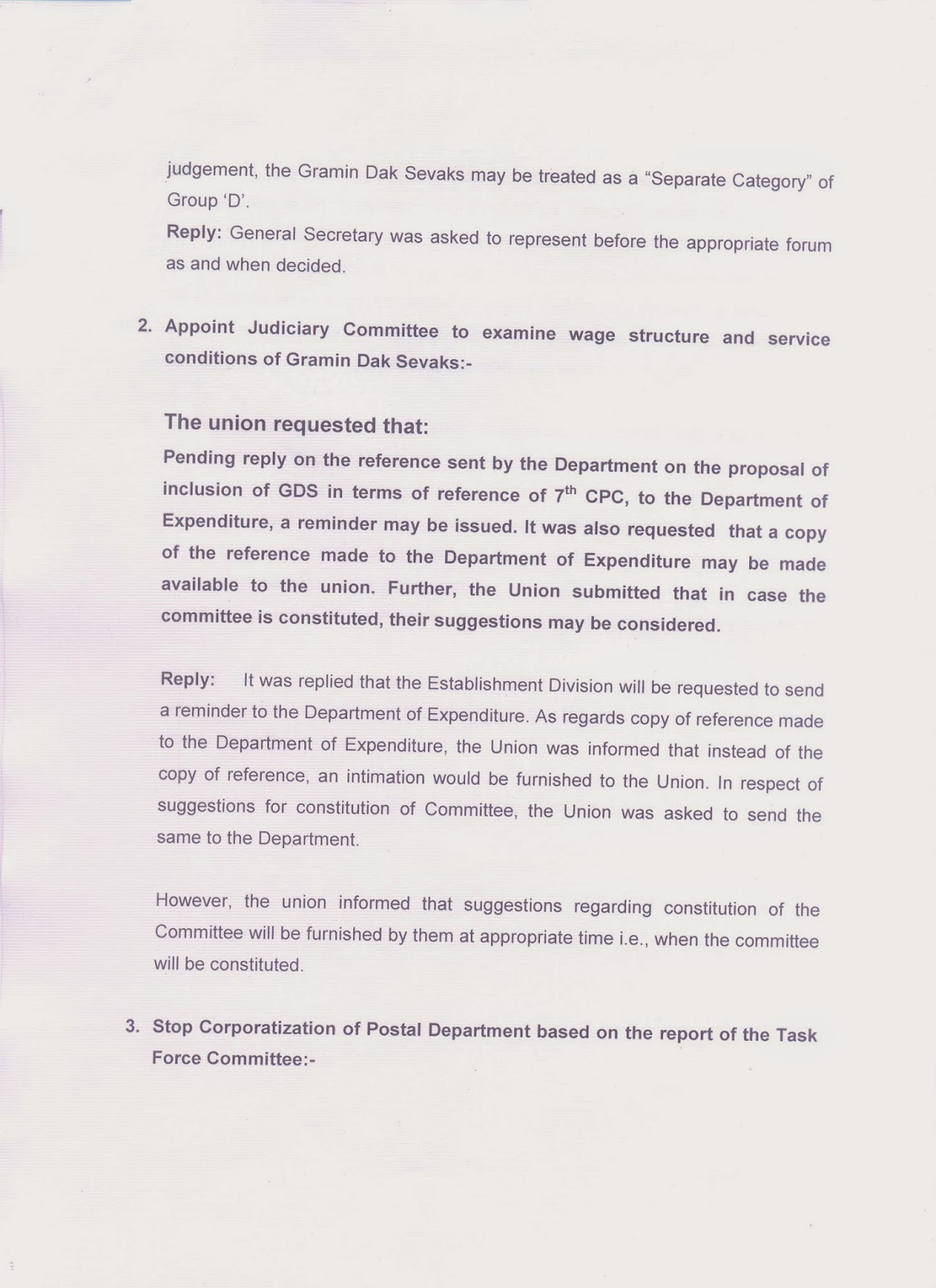 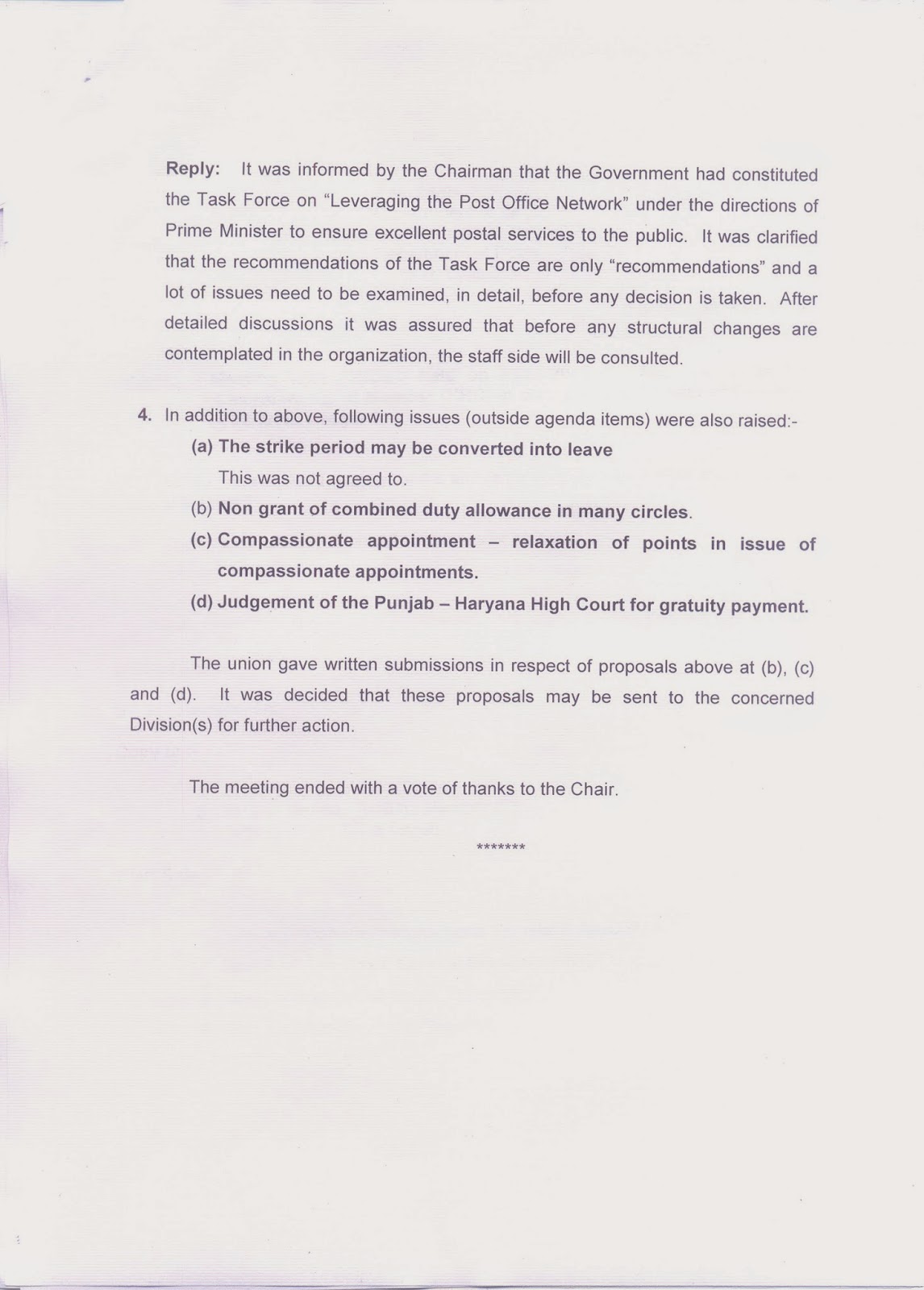