DEPARTMENT IS WILLING FOR A WORKING ARRANGEMENT – HIGH COURT VERDICT ON GRANT OF LEAVE TO CHQ OFFICE BEARERS.

The writ petition filed by the CHQ under Articles 226 and 227 of the Constitution of India to quash the order of CAT dated 8.7.05 is disposed of with afavourable note.  The respondents (department)submits that ours is the recognized association and whatever benefits for the union as a General Secretary would be extended and further WILLING TO CONSIDER THECASE OF THE UNION,AIPEDEU that is for grant of leave as sought for.

IN  THE  HIGH  COURT  OF  KARNATAKA  AT  BANGALORE

(for the present Sri S.S. Mahadevaiah)

R/by the Secretary to Govt.,

This Petition is coming on for final hearing this day,  MANJUNATH  J. made the following.

Petitioners are challenging the orders passed by the Central Administrative Tribunal, Bangalore Bench, Bangalore on their Application Nos.1010 & 1023/2003 which are rejected on 8.7.2005.

5.      Placing the submissions of the consul for the Respondents, this petition is disposed of.

Posted by RURAL POSTAL EMPLOYEES at 10:06 AM

PAYMENT OF DEARNESS ALLOWANCE TO GRAMIN DAK SEVAKS (GDS) AT REVISED RATES WITH EFFECT FROM 01-07-2011. 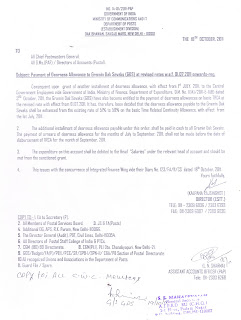 Payment of Dearness Allowance to Gramin Dak Sevaks (GDS) at revised rates with effect from 01-07-2011.

Govt. Orders on Payment of D.A to

(GDS) at revised rates with effect from


MINISTRY OF COMMUNICATIONS & IT


3.         The expenditure on this account will be debited to the Head "Salaries" under the relevant head of account and should be met from the sanctioned grant.

of The HIGH COURT OF PUNJAB & HARYANA AT CHANDIGARH)

UPON hearing counsel the Court made the following

Heard learned counsel for the parties.

We are not inclined to interfere in this Special Leave

Petition. The same are accordingly, dismissed.

However, the question of law is left open.

WE DEMAND FOR GRATUITY AS PER THE GRATUITY ACT 1972 TO ALL GRAMIN DAK SEVAKS
--
S.S.Mahadevaiah
General Secretary
All India Postal Extra Departmental Employees Union

Thanks for Making Dharna at Circle/Region Head Quarters

Thanks for Making Dharna at Circle/Region Head Quarters on 12th Oct, 2011 by CHQ Programme grand successful.

Dear Comrades, in order to register our resentment and anger against the administration's failure to address our problems which are piling up like a mountain, we hereby call upon all Circle unions to observe one day Dharna at Circle/Region Head Quarters on 12 October, 2011 as first step of our agitational programme. Further programme will be announced in due course. After the conclusion of the dharna please send the following savingram to the Minister of State for Communications and IT New Delhi and Secretary Department of Posts, New Delhi-110001

"Problems of GDS employees are piling up without any concrete steps by administration to address them kindly intervene.

All Circle/Divisional/Branch Secretaries and Active Members are requested to make the above mentioned programmes of action a grand success.