BONUS NEWS
Regarding GDS Bonus the propaganda made by Krishnan & Co is totally false and ill-motive action. Finance ministry has not rejected the proposal for raising Bonus Ceiling to Rs. 3500/-. Publish immediately such rejected order if Krishnan is honest.

Further Krishnan & Co made to believe the poor GDS through his false SMS that “Mahadevaiah has given a letter to the administration to take action against those who participated in the 12th December and NFPE will publish the letter”. We are waiting till date but Krishnan & Co has not yet published the letter after 10 days also.

Though AIPEDEU is the member in the confederation, confederation has not extended solidarity to October indefinite strike even orally.  Is it the right way to sit in silence when the struggle is going on? Is it the trade unionism? AIPEDEU extended its solidarity and instructed all GDS to participate in 12-12-2012 strike though the confederation intentionally with hidden agenda kept us away.
CHALLENGE TO KRISHNAN & CO
We challenge Krishnan & Co to publish the rejected order regarding bonus ceiling enhancement and Mahadevaiah’s letter which he mentioned in his false SMS and website immediately if they are honest. Accept our challenge!
FACTS & REALITIES
The facts and realities regarding bonus ceiling enhancement will be brought to the notice of all our comrades with full details and particulars on next week in our website.
THE PROPOSAL FOR ENHANCEMENT OF BONUS CEILLIG HAS NOT BEEN REJECTED BY THE FINANCE MINISTRY. THE FINANCE MINISTRY HAS SENT THE FILE BACK TO THE DEPARTMENT OF POSTS FOR SOME CLARIFICATION. DETAILS ON NEXT WEEK. 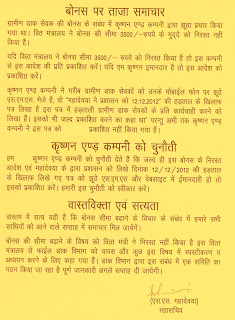