FRUITS OF AIPEDEU Indefinite strike from the Department of Posts to GDS employees.


To
All the Circle / Divisional/ Branch Secretaries of All India Postal Extra Departmental Employees Union. All India Office Bearers


FRUITS OF AIPEDEU Indefinite strike from the Department of Posts to GDS employees.


(1)    Bonus Enhancement Rs. 3500/- to GDS employees. Discrimination has been removed between Departmental and GDS employees and parity has come.


Uncompromised, continues struggles and efforts of AIPEDEU compelled the Finance Ministry to accept and agree the justified and genuine demands of Gramin Dak Sevaks placed in the charter of demands during the Indefinite strike of AIPEDEU in the month of October, 2012.


It is known fact that the Finance Ministry considered the Bonus enhancement to GDS only after the countrywide relay hunger fast programme issued by the CHQ from August 5th 2013 to August 8th 2013. The Department of Posts also agreed that the bonus enhancement for GDS is the achievement of AIPEDEU. The Department of Posts addrssed the letter to Comrade S.S. Mahadevaiah, General Secretary, AIPEDEU regarding enhancement of bonus ceiling for Gramin Dak Sevaks vide letter No. 08-04/2012-SR New Delhi, dated the 27th September, 2013. This clearly shows that the AIPEDEU is the main force for this achievement.


Comrades, be alert about the so called big leaders, shedding crocodile tears for GDS employees. The leaders who opposed GDS struggles, leaving all the morals now came on the screen and posing that they are the champions for GDS. What a shame!


Orders have issued on 17.09.2013 for implementation of Circle Welfare Fund Scheme. Complete details and particulars were published in Rural Postal Employees.


The inclusion of GDS in 7th CPC is one of the major demands of October, 2012 Indefinite Strike. Now the Government constituted 7th Central Pay Commission for the Central Government employees. You are all aware that the General Secretary of AIPEDEU Com. S.S. Mahadevaiah raised the issue in the Calcutta National executive and demanded that the GDS
employees should be in the purview of 7th CPC. All the delegates accepted the proposal of our General Secretary. Now it is proper time to fulfill our demand. Consolidate our strength unitedly to compell the Govt. of India to achieve this demand. Get ready for serious agitation.


Bonus Donation to CHQ and Circles.


We are sorry to inform you that the Financial position of the CHQ is very weak during the last financial year. Most of the Circles are not sending due Quota to CHQ. We have to play key role and launch struggles for the cause of GDS main demands (i) Inclusion of GDS employees in 7th Central Pay Commission. (ii) Regularisation of GDS employees in future CHQ is going to conduct March to Parliament on 12-12-2013 and GDS National Convention in Delhi on 13-12-2013. Future course of action will be decided there after due consultation of rank and file. CHQ appeals all our Branch/Divisional/Circles Secretaries to mobilize large number to attend the CHQ programmes. Suggest our comrades to make to and fro reservations as early as possible. The climate in Delhi in month of December is very cold. Come with necessary and proper arrangements to face cool climate.


Modificatioin regarding Service Discharge Benefit Scheme to GDS suggested by AIPEDEU is likely to be accepted.


Financial Assistance is very essential for CHQ to fight effectively for the cause of our demands.  We can’t conduct any programme at National level without money. Hence All the Branch/Divisional Secretaries are requested to collect Rs. 200/- as Bonus donation from each member and remit Rs. 75/- to CHQ and Rs. 50/- to Circle. Take this seriously. Co-oprate  to improve the financial position of CHQ and Circles.


Sent Bonus Donation by DD’s , Division wise Donatioin particulars will be published in Rural Postal Employees strictly. DD’s should be sent to be following address. 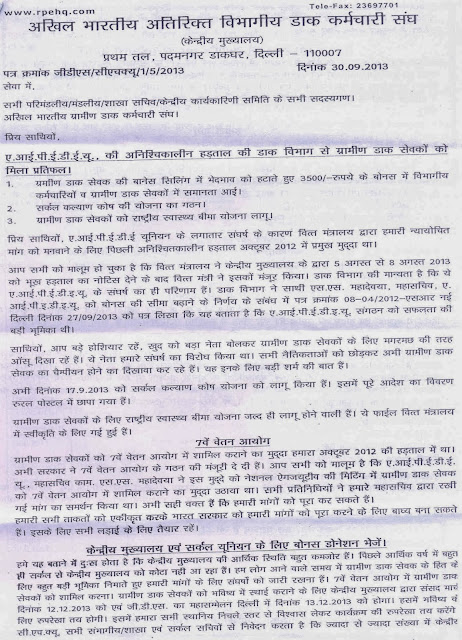 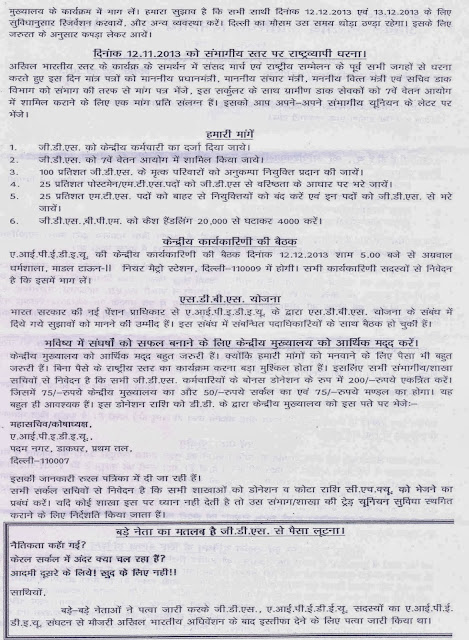 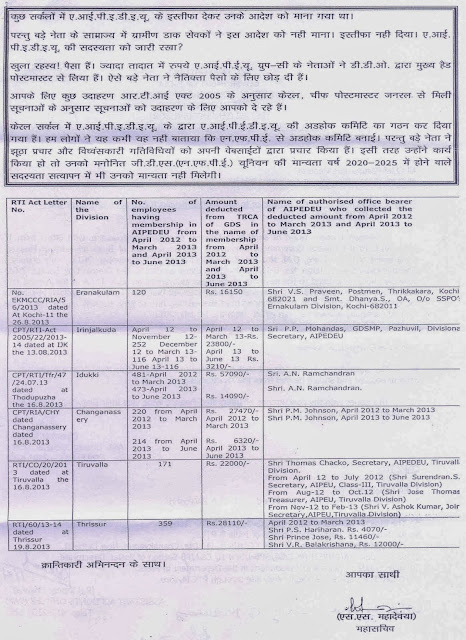 Posted by RURAL POSTAL EMPLOYEES at 10:32 AM