All are requested, individually to send your suggestions/feedback following lines. This below modeling letters drafted lines to the following address. 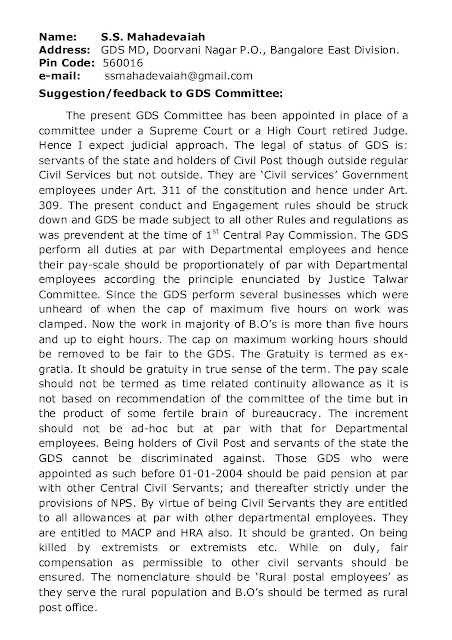 The present GDS Committee has been appointed in place of a committee under a Supreme Court or a High Court retired Judge. Hence I expect judicial approach. The legal of status of GDS is: servants of the state and holders of Civil Post though outside regular Civil Services but not outside. They are ‘Civil services’ Government employees under Art. 311 of the constitution and hence under Art. 309. The present conduct and Engagement rules should be struck down and GDS be made subject to all other Rules and regulations as was prevendent at the time of 1st Central Pay Commission. The GDS perform all duties at par with Departmental employees and hence their pay-scale should be proportionately of par with Departmental employees according the principle enunciated by Justice Talwar Committee. Since the GDS perform several businesses which were unheard of when the cap of maximum five hours on work was clamped. Now the work in majority of B.O’s is more than five hours and up to eight hours. The cap on maximum working hours should be removed to be fair to the GDS. The Gratuity is termed as ex-gratia. It should be gratuity in true sense of the term. The pay scale should not be termed as time related continuity allowance as it is not based on recommendation of the committee of the time but in the product of some fertile brain of bureaucracy. The increment should not be ad-hoc but at par with that for Departmental employees. Being holders of Civil Post and servants of the state the GDS cannot be discriminated against. Those GDS who were appointed as such before 01-01-2004 should be paid pension at par with other Central Civil Servants; and thereafter strictly under the provisions of NPS. By virtue of being Civil Servants they are entitled to all allowances at par with other departmental employees. They are entitled to MACP and HRA also. It should be granted. On being killed by extremists or extremists etc. While on duly, fair compensation as permissible to other civil servants should be ensured. The nomenclature should be ‘Rural postal employees’ as they serve the rural population and B.O’s should be termed as rural post office. 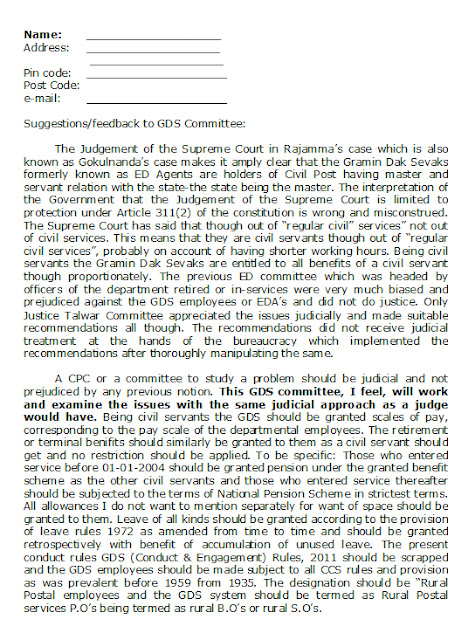 The Judgement of the Supreme Court in Rajamma’s case which is also known as Gokulnanda’s case makes it amply clear that the Gramin Dak Sevaks formerly known as ED Agents are holders of Civil Post having master and servant relation with the state-the state being the master. The interpretation of the Government that the Judgement of the Supreme Court is limited to protection under Article 311(2) of the constitution is wrong and misconstrued. The Supreme Court has said that though out of “regular civil” services” not out of civil services. This means that they are civil servants though out of “regular civil services”, probably on account of having shorter working hours. Being civil servants the Gramin Dak Sevaks are entitled to all benefits of a civil servant though proportionately. The previous ED committee which was headed by officers of the department retired or in-services were very much biased and prejudiced against the GDS employees or EDA’s and did not do justice. Only Justice Talwar Committee appreciated the issues judicially and made suitable recommendations all though. The recommendations did not receive judicial treatment at the hands of the bureaucracy which implemented the recommendations after thoroughly manipulating the same.

A CPC or a committee to study a problem should be judicial and not prejudiced by any previous notion. This GDS committee, I feel, will work and examine the issues with the same judicial approach as a judge would have. Being civil servants the GDS should be granted scales of pay, corresponding to the pay scale of the departmental employees. The retirement or terminal benifits should similarly be granted to them as a civil servant should get and no restriction should be applied. To be specific: Those who entered service before 01-01-2004 should be granted pension under the granted benefit scheme as the other civil servants and those who entered service thereafter should be subjected to the terms of National Pension Scheme in strictest terms. All allowances I do not want to mention separately for want of space should be granted to them. Leave of all kinds should be granted according to the provision of leave rules 1972 as amended from time to time and should be granted retrospectively with benefit of accumulation of unused leave. The present conduct rules GDS (Conduct & Engagement) Rules, 2011 should be scrapped and the GDS employees should be made subject to all CCS rules and provision as was prevalent before 1959 from 1935. The designation should be “Rural Postal employees and the GDS system should be termed as Rural Postal services P.O’s being termed as rural B.O’s or rural S.O’s. 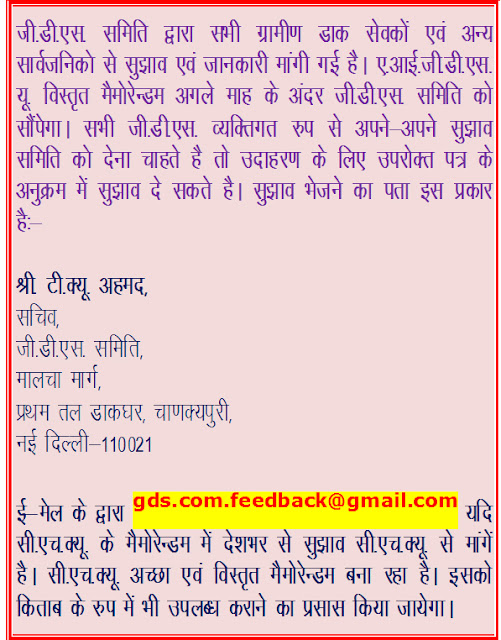