The National convention of Gramin Dak Sevaks being held at Agrwal Dharmsala, Delhi expressed serious concern and anguish over continuing indifference and inaction by the Govt. of India towards pressing demands or Gramin Dak Sevaks presented before the Department of posts by All India Postal Extra Departmental Employees Union. The convention once again congratulates the leaders, members and well wishers of AIPEDEU for the unprecedented historic success of the seven days indefinite strike on 16-22 October 2013. The strikes and struggles during last year have strengthened and widened the unity of the GDS fraternity.

In the wake of the resounding success of the seven day indefinite strike the Govt. of India granted Rs. 3500/- bonus to GDS employees at par with departmental employees. Rastriya Swastya Bhema Yojana(RSBY) scheme is going to implement within short period.


The National convention of Gramin Dak Sevaks expresses anguish over the indifference of the Govt. towards the long pending burning issues concerning Departmentalization of BOs, Civil servant status to Gramin Dak Sevaks, Inclusion of GDS wage structure & service conditions in the purview of 7th Central Pay Commission, merger of 50% DA with pay for GDS Provide cent percent compassionate appointments to the wards of deceased GDS employees. Revise BPM cash handling norms Rs 20,000 per 1 point  25% Postmen, MTS vacancies are filled up by the senior GDS officials on the basis of seniority cum fitness. Stop 25% postmen, MTS vacancies offer to outsiders. Those vacancies also should be filled up by GDS.


and regularization of casual, Part time, contingent employees and Revision of their wages with effect from 01.01.2006 and grant of D.A.

It is known fact that the GDS created revenue to the Department of posts by implementing NREGA, SSP, PLI, RPLI and various schemes introduced by the Department while bearing the unbearable burden of all round exploitation through denial of their basic and justified rights. If all type of work done by GDS has to be taken into workload, the BOs will be departmentalized with more than 8 hours work.

The convention calls upon the GDS fraternity to raise their voice unitedly against indifference and injustice and prepare for intensifying the countrywide struggle in the days to come.

If our demands are not settled after this programme, serious trade union action will be launched in appropriate time. The convention appeals to the entire GDS of the department of posts to take part in the programme with strong determination and thundering the message to the Govt. 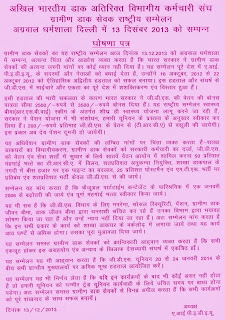 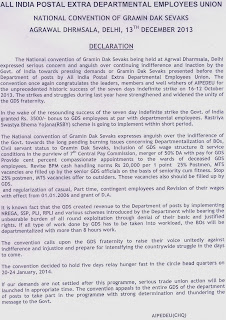 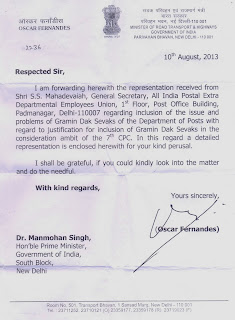 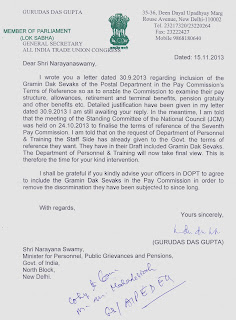 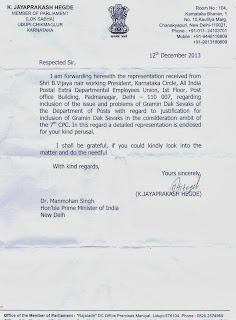