Department of Posts will deposit Rs.200 per GDS per month 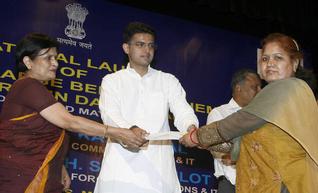 
The cost of the management of the scheme would be over Rs.70 crore annually, to be borne by the Union Government.


"The scheme has been designed to benefit the GDSs working mainly in the rural, remote and far-flung areas across the country. Some modifications in the NPS-Lite scheme have been made under the SDBS to suit the needs of the GDS," he added.


The Minister pointed out that the monthly deposits by the government would constantly grow through investments in different schemes/securities by the pension fund managers (PFM) appointed by the PFRDA.


Describing the GDSs as the backbone of the Postal Department who are responsible for running the rural network of post offices, Mr. Pilot said the Department was committed to the welfare of such important constituent of postal human resources.


He also gave away Permanent Retirement Account Number (PRAN) cards to some GDSs.


According to Department of Posts Secretary Radhika Doraiswamy, "Of 2.73 lakh GDSs, 1.53 lakh have already opted for SDBS and 1.35 lakh have already received their PRAN cards. The existing GDSs have the option to join the new scheme or continue under the Severance Amount Scheme as per their choice. The new scheme is, however, mandatory for the GDS engaged on or after January 1, 2011."